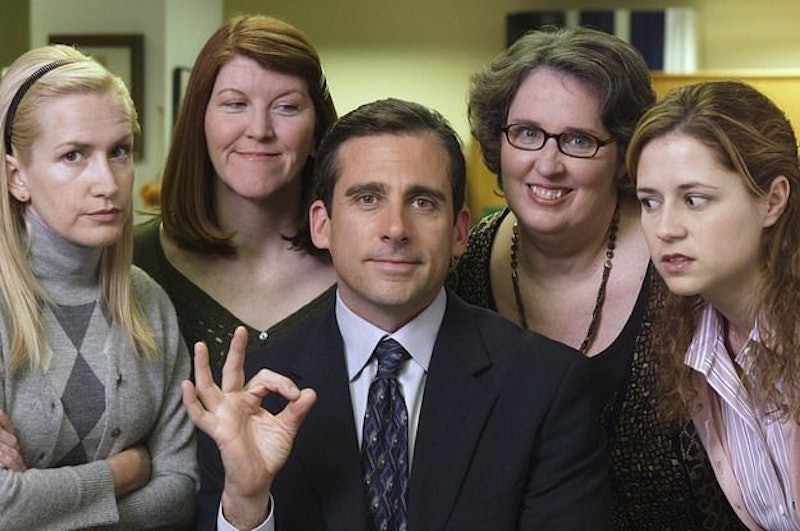 Netflix fans are still recovering from not being able to watch The Office on the streaming service, but its move to NBC's Peacock will result in even more content from the Dunder Mifflin crew. In August 2020, Matt Strauss, chairman of Peacock and NBCUniversal Digital Enterprises, revealed they'd introduce new "elements that were not part of the original broadcast," and it's becoming even more clear that he might've been hinting at a reunion. According to creator Greg Daniels, there's a good chance The Office cast could reunite, and he's already working through possible plot details.

Nearly eight years after the series finale, Daniels told E! News, "I think it’s probably more likely now that the show is on Peacock." Hinting at the uncertain state of the world, he added that there are "no plans right now certainly." Of course, just because nothing is set in stone doesn't mean Daniels and producers aren't working behind the scenes to make something happen. “People are more open to it now it seems,” he said. “The issue is — what is left to be said about the characters?”

Speaking about how the reunion could take shape, Daniels suggested it would be a one-off special instead of multiple episodes or the virtual table reads that were so popular in 2020. But because The Office ended with a time jump and the characters on different paths as they move on from Dunder Mifflin, the writers might have difficulty crafting a plot. However, Daniels does have an idea that could work: “It would be fun to find some lost episodes and shoot them as if they were back in 2010 or something," he proposed. If that happens, there's a chance fan favorites like Steve Carell, Mindy Kaling, John Krasinski, Rainn Wilson, and Jenna Fischer could all return.

While plans for a reunion remain up in the air, Peacock subscribers can enjoy every episode and bonus The Office content on the streaming service. The NBC classic will reportedly remain on the platform for five years, so if you have yet to repeatedly watch every season and make The Office 80 percent of your personality, get on it!