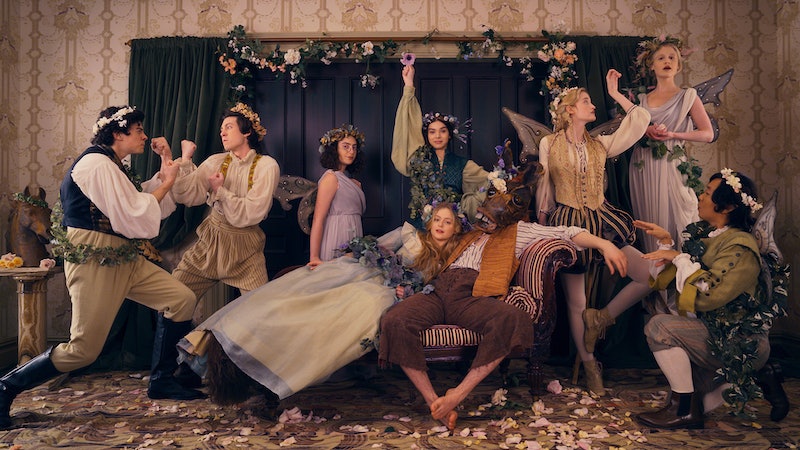 Alena Smith, the creator of Dickinson, talks like she writes, dipping and bounding between the literary and the lowbrow. In her Apple TV+ period series, 19th-century lyric poet Emily Dickinson (played by Hailee Steinfeld) uses 21st-century slang. She trips out on opium, sounds off about the “bullsh*t” of women’s domestic lives, then fakes sick to stay in bed working on the poems that will make her posthumously famous.

“In a way, what I was trying to say with the show is every woman's life is a Gothic story,” Smith says over the phone from New York, where she’s filming Season 2. It’s a theory borne out by her own experience of carrying twins in 2018. “Becoming two times bigger and having two human beings inside you definitely fits in the realm of a Gothic, surrealist experience,” she says. “Going to the hospital and having them cut you open when you’re not even under full anesthesia? It’s pretty Gothic.”

It took more than six years for the dizzy, tonal world of Dickinson to fully gestate. Six years of Smith, 39, titrating her sources and curating references. In addition to the influence of Dickinson’s 1800 poems, there are shades of Roald Dahl, Nathaniel Hawthorne (especially The Blithedale Romance), Wes Anderson (especially The Royal Tenenbaums), and Daneen Wardrop’s Emily Dickinson’s Gothic: Goblin with a Gauge, a book of literary criticism that tests genre assumptions as intentionally as the show does. Smith spent two of those years building a multiple-season story arc with producer Michael Sugar (Spotlight, 13 Reasons Why) and meeting with potential directors. The goal, Smith says, was to “make [the show] kind of undeniable, quote-unquote, to use industry parlance. Because I was not undeniable. I had not been a showrunner.”

In the end, Smith only pitched the series once, to Apple, which added Dickinson to its brand-new streaming service, alongside sturdier fare from industry veterans. The Morning Show, starring Jennifer Aniston and Reese Witherspoon as news anchors in a workplace drama, was billed as the network’s marquee program — the reason viewers should pay yet another monthly fee for yet another platform. But it’s the weird Victorian comedy from the untested showrunner that’s generating critical buzz and Twitter memes. Dickinson works because it’s not afraid to alienate the people who probably wouldn’t like a show about Emily Dickinson in the first place.

“Every woman's life is a Gothic story.”

Smith was drawn to the idea of “achieving the impossible within extreme confinement,” as Dickinson did, reinventing American verse from her bedroom. “Frustration has been a powerful engine of my career thus far and of this project. And it's definitely part of the character of Emily Dickinson,” she adds.

Smith grew up in the Hudson Valley of New York, a rural landscape not unlike Dickinson’s Amherst, Massachusetts. The area has a menacing Victorian frisson. “It looks a bit like it's still the 19th century and has haunted Sleepy Hollow period vibes,” Smith says. She discovered Dickinson as a high school poet.

At Haverford College, she majored in philosophy, but she also wrote a play, which is what she ultimately pursued, enrolling in Yale’s graduate program. At the time, she considered drama school a pragmatic choice for a writer, with obvious professional opportunities. “At least you were going to have the opportunity to put on plays,” she says, “as opposed to just, like, sitting around a table reading poems or short stories.” Her classmates included a raft of future TV standouts: Sarah Treem (The Affair), Rolin Jones (Weeds), and Jami O’Brien (Hell on Wheels). “When I visited Yale Drama School in 2003, the student production that I saw was a play by Roberto Aguirre-Sacasa that was about Archie characters,” Smith says. “So basically he was working on Riverdale, like even then.”

But at the time Smith graduated, she says, it was considered “shameful” on the Yale drama scene “to write for something so commercial as television.” So Smith moved to Brooklyn and worked as a nanny, making plays and trying to get them produced. She was in the second class of the prestigious Emerging Writers Group at the Public Theater. Six years passed.

“By the time I was about to turn 30, I was like, this is not tenable,” she says. “Because even when you do get a play produced, which is incredibly hard, even in a somewhat prestigious off-Broadway space, you make about $5,000, which, at that point, you might've put in years of work on this thing.”

In the meantime, Twitter was gaining popularity. Smith, who grew up on The Onion, started noticing weird joke accounts on the site. “It was clearly such a hub for writers of all kinds.” Her own dark entry in December 2011 was @TweenHobo. Her bio: “I'm only twelve, but I'm a hard twelve.” Her location: “Railroad to Bieberville.”

“Literally within a month of working on [Twitter], I had famous TV writers DM-ing me and being like, Oh, you should come to LA. And I'm like, Great,” she says. “One month of tweeting has led to more opportunities for me than 10 years of playwriting.”

Coincidentally, Smith had recently met the man who would become her husband, and he wanted to work on movie sets. So the pair decided to pull up stakes. “I guess, do our version of going out West to seek our fortune,” she says. TweenHobo landed a book deal, and Smith lived off the advance for a year before she got her first staff writing gig in LA — Aaron Sorkin’s The Newsroom. Later, she’d work with fellow drama school classmate Treem on The Affair. Two years after leaving New York, in 2014, she was featured among Variety’s “10 TV Scribes to Watch.”

The playwright skill set, it seemed, was suited to the current golden age of streaming. “We came with a sense of being self-producers and sort of entrepreneurial,” Smith says of the transition. “We were very committed to building these original worlds.”

The result, in Dickinson, is a show that violates every tenet of What Victorian Period Pieces Should Look Like and liberates the poet from the hair-hurt of history’s tightly wrapped bun. Anna Baryshnikov, who plays Dickinson’s sister Lavinia on the show, says Smith personally helped her understand the show’s ethos. “Alena said, there was a moment that she kind of wanted a feeling of ‘b*tch, please,’” Baryshnikov says. “And she was like, even though they might not have had that language, that feeling must have existed.”

“Frustration has been a powerful engine of my career thus far. And it's definitely part of the character of Emily Dickinson.”

During the filming of the first season, Smith was on set for every scene — a feat considering the infant twins and, in her telling, everything being a total blur. “It was so crazy,” Smith says. “So many women have to deal with this timing, right? Because as we come to what can be these sort of high watermark moments of our careers, that's also when we are at the moment of — if we want to have children — then it's time to have them. And in my case it was two at once.” She credits her husband — and professional child care — for making it possible, but Smith still can’t explain or even remember the details of how it all, somehow, worked out. “The whole thing is like a fever dream. It's so completely crazy,” she says.

Throughout the fever dream, Smith stayed obsessed with Dickinson. Off the top of her head, she names the poet’s favorite Shakespeare play (Othello), the portraits she had hanging in her bedroom (George Eliot, Elizabeth Barrett Browning), the flowers she grew in her herbarium and the ones that actually grew best in her conservatory (you get the idea). By nature, Smith prefers to let things go. “I am Marie Kondo,” she says. Her favorite store is Muji, a minimalist temple to containers, and her inbox is a perfect zero. But you can’t delegate your own brain, and Smith says she got “kind of addicted” to Dickinson.

“Maybe also the past gives me anxiety, which is another element of Dickinson,” she says. “I quit Facebook in 2012, because I just couldn't handle having all those remnants of my past there. ... As an artist, I like to make use of things and then put them all away.” Recently, Smith’s mom told her it was like everything Smith had been through was in Dickinson now. “In a good way,” Smith explains. Putting it in the show means not having to keep it.