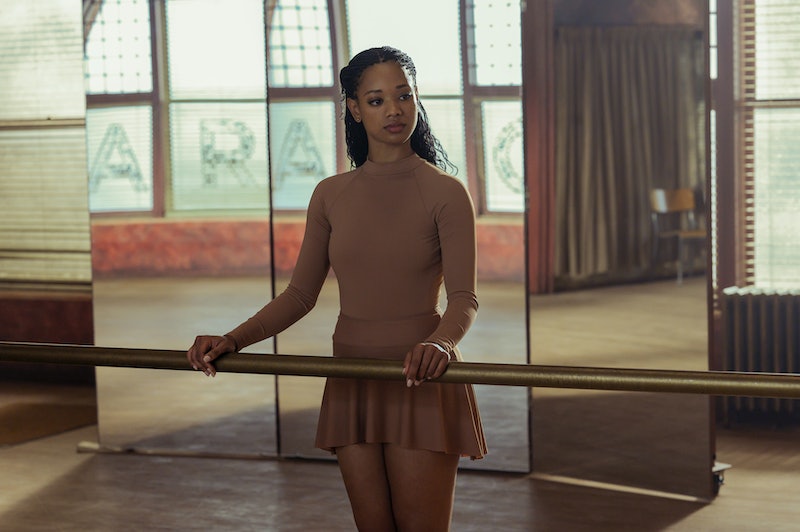 Tiny Pretty Things is both a ballet drama and a murder mystery, all set within an elite Chicago conservatory called The Archer School of Ballet. As the entire story revolves around ballet, finding professional dancers who also happen to be great actors to cast on Tiny Pretty Things was a key aspect in telling an authentic story. It was a casting process as difficult as "trying to find unicorns," head choreographer and dance consultant Jennifer Nichols told Dance Spirit. "To be at that level of dance skill is already a huge feat, and to be a brilliant actor on top of that is hard."

The cast of Tiny Pretty Things ended up impressing Nichols with their dance backgrounds and their acting chops. Here's everything to know about the cast of up-and-comers.

Jefferson plays lead protagonist Neveah, who is given the chance rise above her past when the death of one of the dancers opens up a last-minute spot at Archer. But she faces an uphill battle to break into the insular world of ballet.

Jefferson choreographed SchoolboyQ’s "Chopstix" music video, and she has a BFA in contemporary dance performance from the Boston Conservatory. Unsurprisingly, she quickly won over the audition team with her dancing. "There's an innate grace and purity to Kylie's lines," Nichols told Dance Spirit. "There was an authenticity to her audition tape: This is Kylie dancing, not a graduate of such-and-such school, where you see their teacher speaking through them. There's a real freedom to her movement. She comes alive when she dances."

Kylie Jefferson's Instagram shows off her athleticism and past performances.

Jollette plays Bette, a ruthlessly polished and confident “music box ballerina.” She comes from money, and she's determined to step out from the shadow of her older sister Delia.

Jollette has guest-starred on shows like This Is Us and Chicago PD. She's been dancing ballet since she was two and a half years old and also has experience in floor gymnastics and contortions.

Norman plays June, a shy and sweet dancer raised by a strict mother who doesn't see the value of ballet.

Norman is an actor from London, and she trained at The National Ballet. She made her acting debut as the alternate Lise Dassin in An American in Paris, and played Demeter in the recent Cats film.

Clost plays Shane, who's teased by his peers for being a dancer in his small town. He tends to be the hothead who gets into fights, but he badly wants to succeed at Archer.

Though Clost is a Julliard-trained dancer, he told Backstage the audition process for Tiny Pretty Things was still pretty difficult. "They had us prepare and learn an entire ballet class, plus improvising solos and a dance reel if you had one, and then 10 pages of sides," he said. "They really were looking for — the producers called us ‘unicorns.’ The lead cast [members are] these people that had reached a height in their dance career, but then across the board, within the last five years, have really shifted from high-level professional dance into acting.”

Rosen is Nabil, a Malaysian-born dancer who has an intimidating level of power and potential.

Rosen played Alan in the Torch Song play, and has acted in the On the Town and West Side Story musicals.

Gillespie plays Caleb, a talented dancer who uses humor to hide a profound secret — one that could unravel the entire school.

Gillespie grew up as a hip-hop dancer, but branched out into other forms of dance at Roosevelt University Chicago College of Performing Arts. He's acted in Disney's Broadway musical Newsies as well as Aladdin. He's also appeared in shows like Rise, Empire, and The Society.

De Murguia has appeared in the Spanish TV series Dos y Dos and Matador, and has also lent his voice to games like Uncharted 4 and Batman: The Telltale Series. Unlike the rest of the cast, De Murguia had to learn ballet on the job. "I even bought one of those ballet dummies books," he told LRM Online. "I just wanted to work as hard as I could to show up and have some knowledge. It was intimidating because for some of my castmates, ballet is something that they already do really well. For me it was something that was brand new, but I also just wanted to work my butt off to be able to represent accurately."

Barton Cowperthwaite plays Oren, a wealthy and good-looking dancer who hides his anxiety and need for physical perfection.

Per Dance Spirit, Cowperthwaite has a BFA in dance from the University of Arizona. "He's a brilliant dancer," Nichols said. "He's a sinewy chameleon. He can be powerful and snappy, or soft and fluid. He has a lot of training in a myriad of styles, and an extensive professional past. I remember within seconds thinking: 'This kid can do anything.'"

Monique is a former dancer-turned-director of the Archer School of Ballet. She will do everything in her power to protect the institution, even if it means hiding some dark secrets.

Holly has acted in shows such as Motive, Designated Survivor, and NCIS.

Trowbridge is Delia, Bette’s older sister and an extremely talented and beautiful dancer. She returns to Archer after years of dancing abroad, and she relishes her new role as the school diva.

Trowbridge's Broadway credits include An American in Paris and The Cher Show, and she's appeared on shows like Isn't It Romantic and Law & Order: Special Victims Unit.

Salgueiro plays Isabel, a cop who served in the war. She ends up investigating the mysterious death of one of the dancers at the academy.

Salgueiro is a Canadian actor and is known for her roles in Letterkenny, The Boys, and The Expanse.

More like this
'The Sandman’s Ending Is A Departure From Neil Gaiman’s Comic Book Series
By Kadin Burnett
The 'First Kill' Cast & Fans Are Disappointed Over The Show’s Cancellation
By Brad Witter and Sophia Moore
Woodstock Co-Founder Michael Lang Faced Several Lawsuits After The 1999 Festival
By Brad Witter
What’s New On Netflix: 'Bridget Jones’s Diary' & 'Monster-in-Law'
By Arya Roshanian
Get Even More From Bustle — Sign Up For The Newsletter