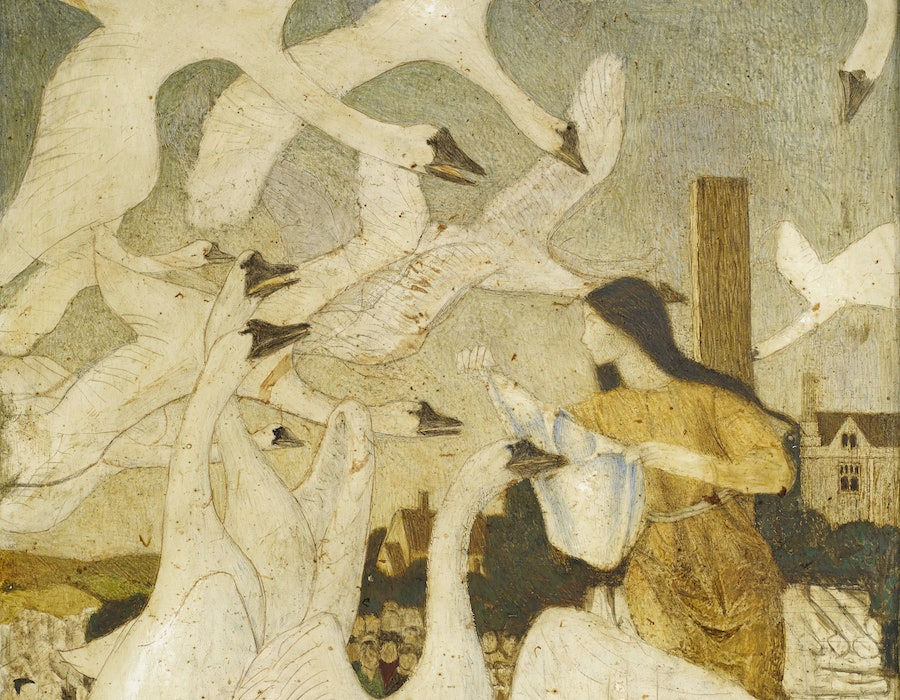 I love fairy tales. There’s something inspirational about them, a little voice that whispers: Anyone can be a hero, including you. But one in particular— Wanda Gág’s version of “The Maiden Who Rescues Her Brothers” — has stuck with me from the first time I picked up the 1982 picture book edition.

Commonly known versions of “The Maiden Who Rescues Her Brothers” include the “The Seven Doves” by Giambattista Basile, “The Wild Swans” by Hans Christian Andersen, and three stories — “The Six Swans,” “The Seven Ravens,” and “The Twelve Brothers” — by the Brothers Grimm. In all of them, it’s up to one young girl, “the Maiden,” to rescue a group of boys who’ve been turned into swans. In some versions of the story, the Maiden’s brothers turn into birds after she unknowingly disturbs a magical item. In others, their stepmother curses them herself. In every case, the Maiden’s fate remains the same: To reverse the curse, she must remain completely silent for several years. In most renditions, she’s also tasked with crafting shirts out of special flowers or stinging nettles for the bird-boys, who will be restored the moment they wear them.

During her years of silence, the Maiden marries a king from a neighboring land — but due to her strange, unexplained quietude, her mother-in-law accuses her of witchcraft and arranges for her execution. In a tragic coincidence, her death is slated for her final day of silence. She carries her brothers’ shirts with her to the scaffold, and just as she is about to be killed, the boys return. They are transformed back into human men (except for one, who still has a bird’s wing for an arm because his shirt was not quite finished). Finally able to explain herself, she is spared. Her mother-in-law is sentenced to death instead, and the Maiden, her brothers, and her husband live happily ever after.

For many years after I first read “The Maiden Who Rescues Her Brothers,” I felt as if I were the only child who knew the story. No one ever seemed to have heard of the tale I’d spent hours reading and re-reading.

That is, until a recent spate of books and stories landed. Elizabeth Lim’s newly released Six Crimson Cranes mixes the Maiden’s tale with Chinese and Japanese mythology, and takes a keen interest in the wicked stepmother’s inner life. Gregory Maguire’s 2020 novel, A Wild Winter Swan, centers on the brother left with one swan’s wing, and a girl who finds him atop her Manhattan townhome in the 1960s. A story in Amber Sparks’ 2016 collection The Unfinished World, “La Belle de Nuit, La Belle de Jour” drops the modern conveniences of airplanes and automobiles into a world where people are sacrificed to stave off calamity. And, of course, there’s Juliet Marillier’s Sevenwaters trilogy, the first installment of which, 1998’s Daughter of the Forest, places the Maiden in ancient Ireland.

But why has “The Maiden Who Rescues Her Brothers” resonated with so many contemporary writers? The aforementioned retellings of the Maiden’s story pull different, cogent details from Basile, Andersen, and the Grimms. In many cases, it’s a single image — for Sparks, the princess on the pyre, or for Maguire, the brother left with a bird’s wing — that stuck in the author’s craw.

Part of the story’s allure is its focus on the Maiden and her own mission. “[The] princess is one of few classic heroes who doesn’t rely on a prince to break her curse and doesn’t await a kiss to break the spell,” Lim tells Bustle. Marillier agrees: “I love that the story had a strong young woman as the central figure, though her strength lies in endurance, patience, and steadfastness rather than bold action.”

Indeed, the Maiden stands out among her fellow fairy tale heroines: she at least gets to keep her agency, if not her voice. Compare that to the Little Mermaid, who sacrifices her voice to marry a prince, then takes her own life so that he and his new bride may share in matrimonial bliss — or Snow White and Sleeping Beauty, who spend much of their stories dead, waiting for the hero to revive them, often through explicit or implied sexual assault.

But even if “The Maiden Who Rescues Her Brothers” is less sexist than other stories, it still plays into the same tired, anti-femme tropes. Like Andersen’s Little Mermaid, the Maiden must give up her voice to find salvation. Like Snow White, she turns to domestic work — sewing or knitting — to help the men in her life.

The Maiden’s apparent agency has prompted modern-day storytellers to take up the question of consent in their retellings. In Marillier’s novel, the Maiden figure is raped in the middle of her ordeal, and later struggles to trust the kindly king who falls in love with her. For Sparks’ heroine, it’s the king himself who violates his bride. “As a child,” Sparks says, “the deep beauty of the sibling love and the stark ugliness of the evil spells struck me and stayed with me, but later I was more interested in the way the young king just steals this mute young woman and sexually assaults her, under the guise of courtly love. I was less interested in her as a suffering Christ-like figure, and more interested in her own agency in the story, of her own emotions and actions and choices.”

The swans, too, seem to capture writers’ imaginations. Both Sparks and Marillier note the animal’s mythic qualities, and Maguire was so taken with the swan-winged man that he wrote out the Maiden entirely, focusing only on the ill-fated brother. “Andersen often wrote about deformed or compromised protagonists,” Maguire says. “That adolescence is also the period in human development in which the human form comes into its moment of most pure, unblemished, and mature beauty — the parts suddenly match, but the scars and wrinkles of wisdom and age are still in the future — makes this figure of the swan-boy, both beautiful and damaged — damaged in a most attractive way — nearly unparalleled in the pantheon of great fairy tale figures.”

For me, it’s another image entirely. Whenever I think of “The Maiden Who Rescues Her Brothers,” I think of my picture book, of how Margot Tomes illustrated the little Maiden living quietly in the hollow of an old tree. The most magical part of the story, I thought, was that she had the willpower to spend years in silence.

Maybe the sound’s the thing. On her way to the funeral pyre, Sparks’ heroine endures her jailor’s jeering and the “cries of ‘witch,’ ‘harlot,’ ‘burn her’” from the crowd; all of them fall silent when they learn the truth of her ordeal. In A Wild Winter Swan, noise saturates the heroine’s life in 1962 Manhattan, and it’s in Hans, who “can be nothing... but quiet,” that she finds her much-needed respite.

In a world where we’re always connected, bombarded by notifications and alerts, life becomes one huge, tangled mass of conversations we’re only tangentially participating in, to the point that any participation, even if it’s soundless, feels like noise. So that’s what the enduring appeal of “The Maiden Who Rescues Her Brothers” may boil down to, at least in the 21st century. At a time when noise pollution is literally killing us, years of silence and solitude seem nothing short of magical.