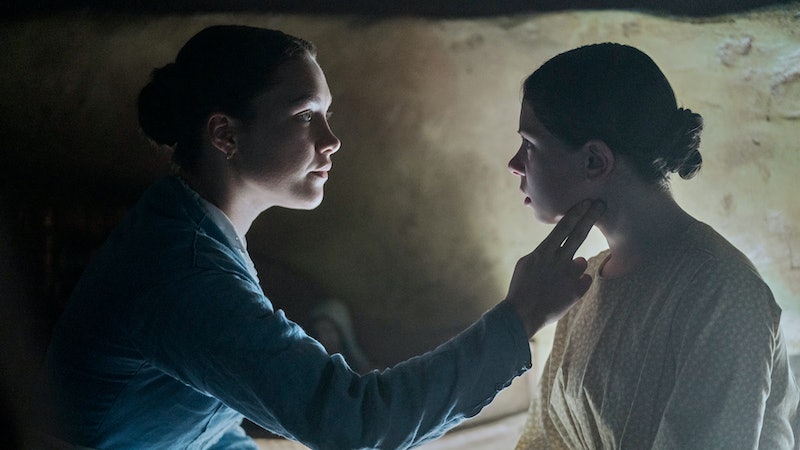 Warning: spoilers for The Wonder follow. Based on the 2016 novel of the same name, Netflix’s psychological drama The Wonder is inspired by the real-life phenomenon of young girls in the Victorian era who took part in “fasting” for long periods of time and claimed to have religious powers. The film’s cast is led by Florence Pugh (Little Women, Black Widow, Don’t Worry Darling), while the original novel, and the film’s screenplay, were penned by the Academy Award-nominated author Emma Donoghue (Room). As with many adaptations, there are differences between The Wonder book and the movie, and you can find some of the most significant plot changes, below.

Directed by Chilean filmmaker, Sebastián Lelio (Gloria, A Fantastic woman), The Wonder centres on the character of Elizabeth “Lib” Wright (Pugh) — an English nurse who arrives in a remote Irish village to oversee a young girl who is said to have survived without eating. Joining Pugh in the film’s cast are The Souvenir and Strike actor Tom Burke, who plays Lib’s love interest and journalist Will Byrne, as well as Irish actors Niamh Algar and Ciarán Hinds, among others. Donoghue penned the adapted screenplay in collaboration with Alice Birch (Normal People) and the film’s director Lelio, and has recently discussed some of the biggest differences between Netflix's The Wonder and the original book.

The film is less “wordy” than the original book

Speaking to Radio Times, author Donoghue revealed that, while co-writing the script, she “knew it couldn’t be as wordy” as the 368-page book. “The book is literally about someone whose job it is to take notes — she writes things, she reads things,” Donoghue explained. “She’s got a constant internal monologue and I didn’t want the film to be wordy in the same way.”

The famed author added that part of the decision to retell The Wonder “with far less wordiness” was to ensure that the story did not “get bogged down in religion, and theological explanation.”

Although leaving out segments of the original novel might present a problem with storytelling, Donoghue also explained that the film’s visuals and setting hold a “powerful quality” and enabled them to tell the story in a new way.

The film is “visually and scenically very different” than the book

In the original book — which is set in the dreary Irish boglands — the character of Lib is rather vocal about her dislike of the “boring,” “flat,” and “dull” surroundings. However, in the Netflix adaptation, the film’s landscape is far more visually striking than described in the 2016 novel.

Speaking to Queue, Donoghue explained that setting The Wonder within a drab environment would not necessarily be “interesting or appealing” to audiences watching on the big screen. “Sebastián chose a location in the hills around Dublin, the low mountains of Wicklow, and it looks almost like a mountainy Western,” Donoghue revealed. “There are these amazing shots of people riding horses along little paths across the mountains.”

The author concluded: “It’s visually and scenically very different than the setting in the book and it works perfectly.”

One important plot line in the 2016 book is the romance between Elizabeth and Will (played by Pugh and Burke in the Netflix adaptation, respectively). However, as Radio Times notes, the film deviates from the source material when it comes to their relationship — which is something that is “teased for pages and pages” in Donoghue’s original book.