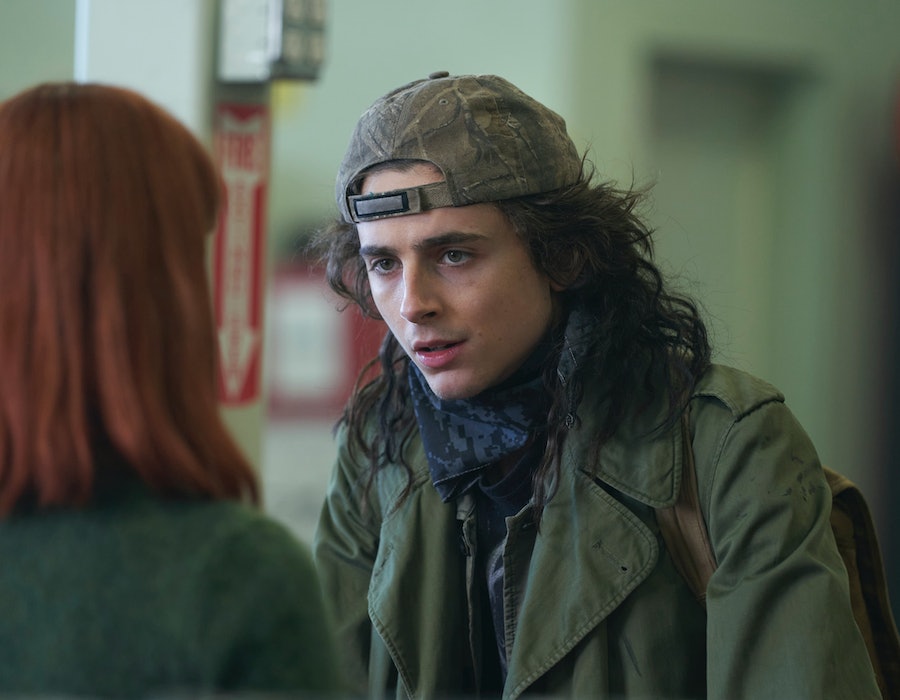 By now, it’s clear that Timothée Chalamet can master anything he takes on. What other actor could be rejected by one sister, then fall in love with another without absolutely infuriating audiences in Little Women? What other celebrity could pull off The King’s inexplicable bowl cut? Whomst among us could possibly survive the internet finding footage of their Nicki Minaj-inspired high-school talent show performance? The man has charm.

And yet Chalamet didn’t land a single Best Actor or Best Supporting Actor nomination for any of his three acclaimed movies in 2021. It’s a travesty, and Bustle will be seeking emotional damages from whomever denied us another Chalamet harness moment. In the meantime, though, we’ll do what others won’t: celebrate Chalamet’s year of career-defining roles. Here, a list of 2021’s top Timothée Chalamets, and the one Timothée that stands above the rest.

The first honorable mention goes to Chalamet’s portrayal of Zeffirelli, a fictional activist and chess player who died young and became a popular graphic tee print shortly thereafter. Though his French Dispatch spotlight was short-lived, Chalamet still deserves praise for his delivery of the line, “Please turn away. I feel shy about my new muscles,” and his evergreen take on constructive criticism: “I only asked you to read because I thought you’d be impressed by how good it already is.” If nothing else, The French Dispatch proves yet again how much Chalamet can do with limited screen time.

Dune is objectively the best movie overall on this list, and Chalamet performs every emotion and action sequence just as masterfully as expected. However, unlike in Don’t Look Up or The French Dispatch, there’s no shock factor, no je ne sais quoi; this is simply the level of expertise we’ve come to expect from LaGuardia High’s finest. Chalamet is at his best when he embraces the absurd, throwing himself into the most ridiculous roles with abandon as only a true theater kid could. In Dune, he’s mostly just doing his job well.

Fine, this is not a movie, nor does it even fall in the Oscars eligibility period (nothing gets past you cinephiles), but it just can’t be overlooked. Though he only utters a single word in this one-minute Cadillac Super Bowl commercial, Chalamet acts out a lifetime of failed playdates and salad chain jobs, eliciting more sympathy for his character in a tight 60 seconds than the original Edward Scissorhands managed in a feature-length film. It’s highly debatable if this ad inspired anyone to go buy a Cadillac in 2021, but true art is not measured by commercial success — and this ad is high art indeed.

Adam McKay’s Don’t Look Up has earned many undeserved accolades, which makes it even more infuriating that its one redeeming quality — our boy Chalamet — didn’t get any of them. Chalamet joins the sci-fi comedy at the perfect time: After incompetent politicians and Elon Musk-types fail to halt an extinction-level event for a mildly entertaining but exhausting hour, Chalamet makes his entrance as Yule, a countercultural youth with a penchant for conspiracy theories. Immediately, he makes a strong case for the mullet, and adds even more silliness to the already over-the-top flick. But somehow, Chalamet plays this surprisingly intelligent himbo as down to Earth, and his presence provides as much comfort to Kate (Jennifer Lawrence), Dr. Mindy (Leonardo DiCaprio), and their end-times crew as it does to the viewer. Every scene Chalamet is in is filled with heart and vulnerability, which is extremely refreshing when the rest of the movie makes you want to scream in frustration.