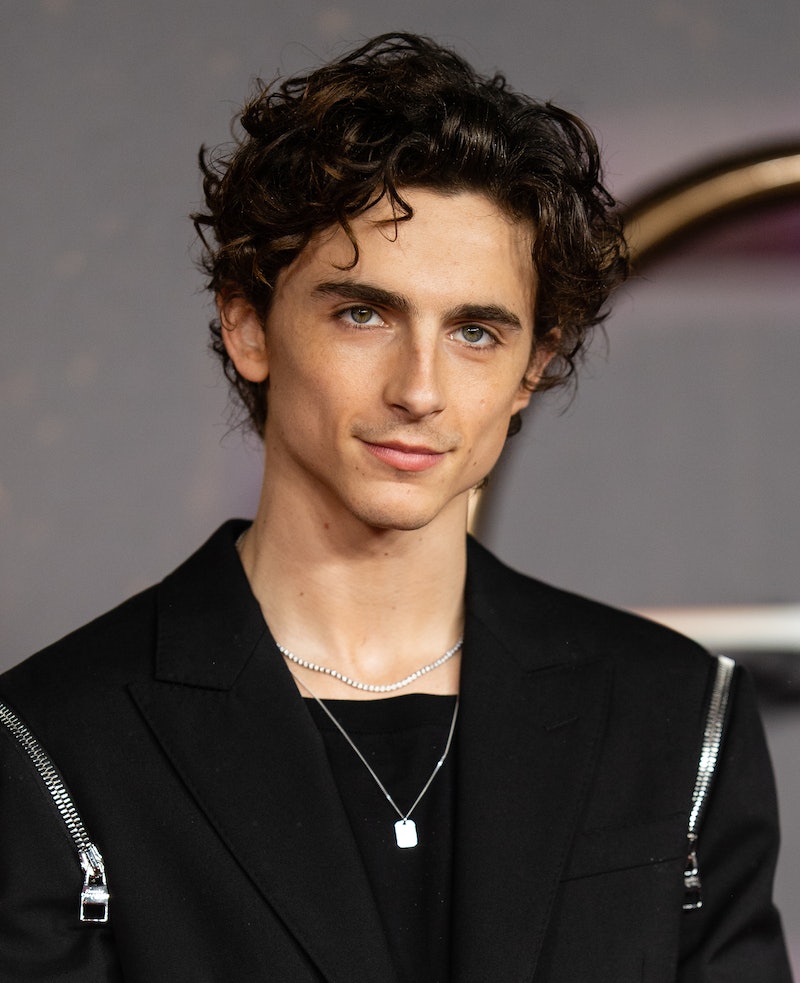 Timothée Chalamet is the definition of booked and busy. The 25-year-old actor is currently at the helm of three major new films — two of which released in October alone. He is one of filmmaker Wes Anderson’s newest darlings in the film The French Dispatch and also portrays the empathetic and inquisitive Paul Atreides in Denis Villeneuve’s highly-anticipated sci-fi film Dune. And, to top it all off, Chalamet also recently revealed the first glimpse of himself as Willy Wonka from the set of the upcoming 2023 prequel film inspired by the whimsical world of Roald Dahl.

While details about the actor’s career accomplishments might be widespread, information surrounding his relationship status is a little less clear. As of now, the Call Me By Your Name actor appears to be single, but he is notoriously very private when it comes to his personal life. Chalamet has always tried to gracefully side-step questions about his past and present dating history in various public interviews and red carpet events. In fact, the young star has never explicitly confirmed he’s in a relationship with any of his past partners.

When asked about his first date in a 2018 interview with W Magazine, he was guarded with his response. “I don’t know. Date is very much a scary word, because then that context has been established,” he said. “You can always see people on early date behavior.”

Although he might be decidedly quiet on the subject of his love life, here is everything we know about Chalamet’s dating history amid the releases of Dune and The French Dispatch.

Chalamet and Madonna’s daughter Lourdes Leon dated in 2013 while they were both students at Fiorello H. LaGuardia High School of Music & Art and Performing Arts, according to People. Both individuals have largely remained mum about their previous relationship and how long it last, but Leon did call Chalamet her “first boyfriend” in an April 2021 Vanity Fair interview. She also revealed that he’s still someone she holds in high regard, saying, “I respect him a lot, we were a little item.”

Since their split, the pair have remained in touch and appear to have a friendly relationship with one another. In 2017, Chalamet told Andy Cohen on SiriusXM that Leon was “excited” to see him star in Call Me By Your Name. “She hasn’t seen it yet, but she’s excited to, she teases me about it,” he said. “The movie itself she’s very excited about and the reception it’s been getting is a great thing. It’s the public appearance stuff around it, some of the late-night things I’ve done, I get made fun of.”

Chalamet and model, actor, and Johnny Depp’s daughter Lily-Rose Depp first met on the set of the Netflix film The King in June 2018. However, the two co-stars didn’t begin to spark dating rumors until roughly three months later when they were spotted by fans at a New York City café together in late September. Although neither actor initially commented on their relationship status, they seemingly confirmed dating speculation less than a month later when they were seen kissing in public in October.

After they traveled to Paris for the holidays and Chalamet artfully dodged a question about Depp at the 2019 Golden Globes, any further information about the couple was incredibly limited for months. Then, in September 2019, they visited Italy for the premiere of The King at the Venice Film Festival. While there, the couple was seen relaxing, spending time with friends, and, most notably, kissing on a boat in Capri, which promptly sent the internet into overdrive.

According to Chalamet well after the fact, the photos of the couple sharing kisses were deeply embarrassing. “I went to bed that night thinking that was one of the best days of my life,” he told GQ in October 2020. “I was on this boat all day with someone I really loved, and closing my eyes, I was like, indisputably, ‘That was great.’ And then waking up to all these pictures, and feeling embarrassed, and looking like a real nob? All pale? And then people are like: This is a P.R. stunt. A P.R. stunt?! Do you think I’d want to look like that in front of all of you?!”

By April 2020, the couple had parted ways, with Chalamet described as “single” in a British Vogue feature in May. However, a year later, in April 2021, the pair were seen shopping together in New York City’s East Village. “While Lily was looking at something outside, he bought it quickly for her as a secret gift and then ran out,” an eyewitness told Entertainment Tonight. “He was very sweet and is always gracious and kind to the designer and staff at the store.”

But by August 2021, it appeared that the couple had gone their separate ways once again after Depp was confirmed to be dating actor Austin Butler, who will star in Baz Luhrmann’s upcoming biopic Elvis.

While the couple never officially confirmed they were dating, romantic photos of Chalamet and actor and singer Eiza González were published in The Daily Mail in June 2020. The images showed Chalamet and González kissing and spending quality time together by a pool while on vacation in Cabo San Lucas, Mexico, just months after his split from Depp.

However, by October 2020, it was reported that they had also broken up. A source close to the couple told E!, “Eiza hasn’t been with Timothée for a while now,” and that Chalamet “seemed single.”

More like this
Who Is Allison Williams Dating After Her Divorce? She’s Engaged With A Child
By Jake Viswanath
Michael B. Jordan Tackled His "Public Breakup" With Lori Harvey On 'SNL'
By Brad Witter
Selena Gomez Confirms She's Single Amid Drew Taggart Dating Rumors
By Martha Sorren, Jake Viswanath and Jack Irvin
Who Is Pete Davidson Dating? He & Chase Sui Wonders Got Caught Kissing
By Jake Viswanath
Get Even More From Bustle — Sign Up For The Newsletter
From hair trends to relationship advice, our daily newsletter has everything you need to sound like a person who’s on TikTok, even if you aren’t.