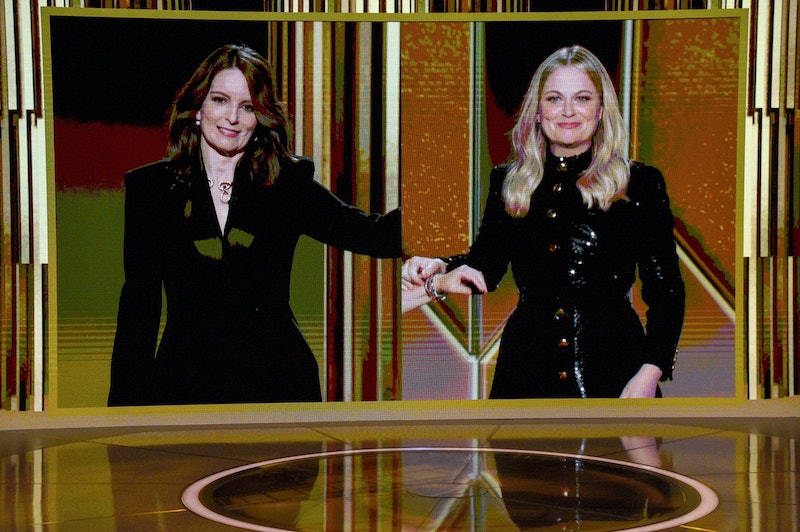 Amid an unconventional awards season, Tina Fey and Amy Poehler offered comedic comfort as hosts of the 2021 Golden Globes. After three previous stints, Fey and Poehler's Globes monologue was a lesson in virtual awards ceremonies done correctly. Fey, wearing a black tuxedo mini dress, appeared from atop New York City's Rockefeller Center in the Rainbow Room while Poehler, in a sequined Moschino dress, held down the fort at The Beverly Hilton Hotel. The main topic of the pair's monologue for the 78th annual Golden Globes was just how weird it is to be having them in the midst of a global pandemic. The co-hosts' other order of business? Dragging the Hollywood Foreign Press Association, the voting body that nominates the year's movies and TV shows.

"The HFPA is made up of around 90 international — no Black — journalists who attend movie junkets each year in search of a better life," Fey remarked. "So, let's see what these European weirdos nominated this year." In the weeks leading up to the Globes, the HFPA has faced controversy for its lack of Black members and led to the #TimesUpGlobes movement on social media. At another point, Fey mentioned Pixar's Golden Globe-nominated animated movie Soul, which she stars in alongside Jamie Foxx. "The HFPA really responded to the movie because they do have five cat members," she joked, addressing the Black main character's transformation to feline form early in the film.

The bicoastal co-hosts also addressed how the ongoing COVID-19 pandemic impacted this year's Globes. At one point, Fey sweetly tried to caress Poehler from across the country, with a hand magically appearing in Poehler's frame. "Tina and I are hosting from two different cities tonight, but technology is so great you're never going to be able to notice the difference," Poehler remarked with a knowing look to the camera. Fey also welcomed first responders to the ceremony, who were in attendance at both the Rainbow Room and Beverly Hilton instead of the usual A-list guests sipping champagne. "Thank you for being here so the celebrities can stay at home," Fey quipped.

Another controversy that Poehler and Fey tackled head-on: the pair of Globes nominations for Netflix's Emily in Paris. The divisive series about an American girl moving to France without knowing a lick of the language was recognized in the Best Musical or Comedy Series category and the Best Actress in a Musical or Comedy Series category for Lily Collins, the show's star. The Los Angeles Times reported that 30 members of the HFPA were flown to visit the show's set in France, complete with five-star accommodations on the Paramount Network's dime. Fey gave a nod to the series and the Globe-nominated film French Exit, joking, “French exit is what I did after watching the first episode of Emily in Paris.”

Amid the Globes' several missteps and a deadly virus raging across the globe, Fey admitted that the awards show could honestly feel like a bit of an afterthought. "Look, we all know award shows are stupid... The point is, even with stupid things, inclusivity is important, and there are no Black members of the Hollywood Foreign Press Association," she explained. "I realize, HFPA, you may not have gotten the memo because your workplace is the back booth of a French McDonald's, but you have to change that."

Viewers have three hours of the Golden Globes to muddle through, an experience that will likely hold technical difficulties, baffling wins, and overly long speeches. But Poehler and Fey set the tone for the evening by calling out the very organization that hired them to host their biggest night. It's a flex that could only be pulled by two of Hollywood's favorite best friends.

More like this
Paul Mescal, Man Of Mystery
By Samantha Leach and Heather Hazzan
Here’s Everything Coming To & Leaving Netflix In October
By Jake Viswanath
Helen Mirren Reacts To Queen Elizabeth II’s Death After Playing Her 15 Years Ago
By Grace Wehniainen and Radhika Menon
Olivia Wilde Addresses *Those* Florence Pugh & Shia LaBeouf Rumours
By El Hunt and Sam Ramsden
Get Even More From Bustle — Sign Up For The Newsletter