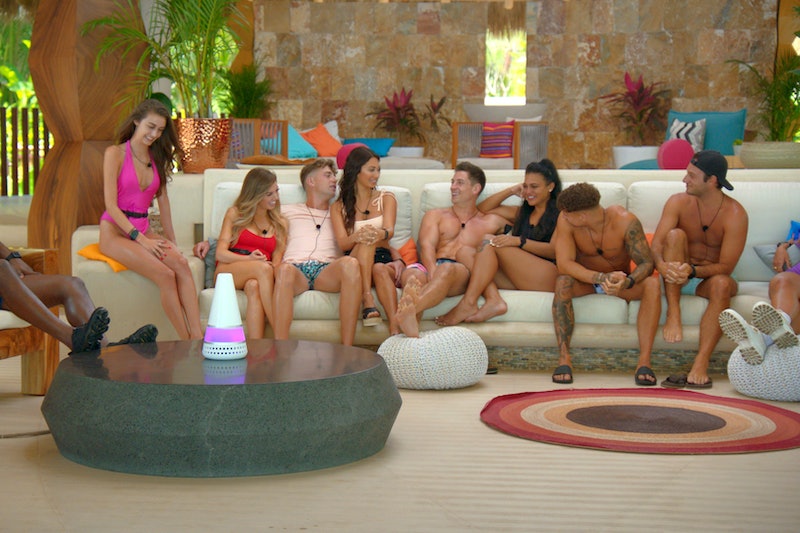 The first season of Netflix’s popular dating series Too Hot To Handle became a massive hit amid its debut in 2020, giving Netflix executives enough reason to renew the show for two more seasons. However, there are some new developments for Seasons 2 and 3, including a new location. Deadline previously reported that, just as in the show’s first season, a group of attractive singles descended upon an “exotic location where they hope to find love.” But instead of heading back to Mexico, the Too Hot To Handle cast and crew filmed amid the COVID-19 pandemic in Turks and Caicos for both seasons.

The streaming platform also announced a new episode rollout plan, which will begin in late June. Ahead of the premiere, here's everything we know about the upcoming seasons, cast members, and release dates.

The spanner in Too Hot To Handle’s premise will remain the same for Seasons 2 and 3 — no “kissing, canoodling, and self-gratification” is allowed. Each time a cast member finds themselves doing any sort of sexual activity, the prize money amount takes a dive. For the show’s first season, viewers saw contestants competing for $100,000, and the prize amount for the next two seasons will be the same. Considering the world is still mid-pandemic, perhaps these contestants will be better suited to weather the no-canoodling rule than those on Season 1, when social distancing wasn't embedded in everyone's brains.

According to Deadline, the show’s producers both cast and shot its forthcoming two seasons under the title Parties in Paradise, “right up to the point that cameras were rolling.” This was done to ensure the concept of Too Hot To Handle was kept under wraps until it was revealed to cast members during production. As witnessed in the first season of the reality dating series, the show’s virtual assistant Lana (think: Google Assistant, Alexa, or Siri) eventually tells contestants the game's rules. Not much is known about the cast for Season 3, but the cast of Season 2 was revealed in June. Further details, including an anticipated trailer, will likely follow as Netflix continues to tease the release.

Here are the contestants for Season 2:

An official trailer featuring the second season cast of Too Hot to Handle’s hasn’t officially dropped. However, a teaser clip showing a glimpse of the Too Hot to Handle villa is available to view via YouTube. Selling Sunset’s Christine Quinn stars in the video, giving fans an inside look at the cast’s opulent home among the sandy shores of Turks and Caicos Islands.

With Too Hot To Handle’s unique take on reality TV, there’s no wonder it topped Netflix ratings in at least 10 countries worldwide and is poised for even more success on the streaming platform. In a March 23 press release, Netflix announced that new Season 2 episodes would premiere on Wednesdays in June. You won’t need to forego marathon sessions altogether, though, since “several new episodes at a time” will drop on the platform. According to a May 19 Netflix press release, the first four episodes will release on June 23, and the remaining six will roll out on June 30.

So get ready! It’s not too long before we get to see contestants embark upon, as Netflix puts it, the “least sexy vacation getaway of their lives.”

More like this
‘The Ultimatum: Queer Love’ Is Officially On The Way
By Radhika Menon and Kadin Burnett
Here’s When You Can Expect More ‘Indian Matchmaking’
By Brad Witter
Netflix's 'Bling Empire' Season 3 Trailer Includes A 'Selling Sunset' Cameo
By Kadin Burnett and Sam Ramsden
The 'Bachelor In Paradise' Schedule Shifts To 4 Hours Every Week After The Season 8 Premiere
By Brad Witter
Get Even More From Bustle — Sign Up For The Newsletter