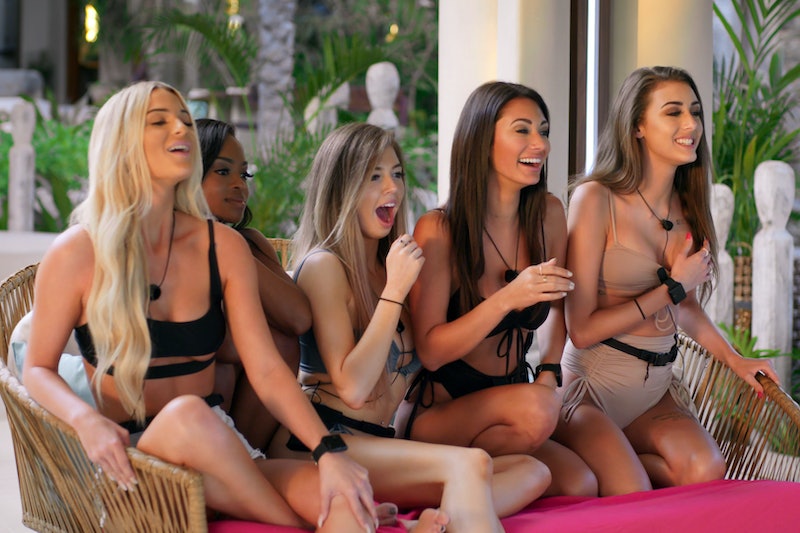 The cast of the new Netflix dating series, Too Hot to Handle, is known for their good looks, but it turns out that they have a pretty attractive senses of humor as well. These TikToks from the Too Hot to Handle cast members prove the group of "sexy singles" are aware of just how ridiculous the premise of the show is — and are more than willing to laugh at themselves.

For those who haven't spent hours of their quarantine watching Netflix's newest addictive reality series, Too Hot to Handle centers on a group of the "hottest, horniest, commitment-phobic swipesters" to a tropical paradise where they are encouraged to make connections and potentially win $100,000. The only catch? They're not allowed to hook up at all, and every kiss, grope, and intimate moment will result in money being deducted from the grand prize. While the show actually resulted in some contestants forming genuine and lasting connections — with one couple even talking about marriage! — overall, Too Hot to Handle has gained attention for its outlandish premise and the hilarious antics of the contestants as they adjust to celibacy.

Thankfully, it seems that most of the cast is well aware of just how absurd the whole situation is. And, though they aren't all active on TikTok, many have used the platform to poke fun at themselves, while also demonstrating why, exactly, the show as called Too Hot To Handle.

British model Chloe won over fans thanks to her goofy personality and memorable one-liners (she was the girl in the trailer advising everyone to "Think of your nan!" if they got tempted to hook up with their fellow cast mates). By her own admission, Chloe isn't the "brightest spark ... in the book," which means that some of her funniest moments came in the form of her ditziest lines. The most famous of all is her shock at using the word "animosity."

The Top Model UK winner has spent the past few days turning that moment into a TikTok meme, offering up the audio for duets and posting plenty of videos of herself laughing at fans' interpretations. Clearly, there's no animosity on the social media platform for Chloe.

In addition to sharing plenty of shirtless selfies and workout videos, the UK-based trainer has mostly used his social media presence to poke fun at the general reaction to Too Hot to Handle — and specifically, to all of the people at home who are still thirsting after him and his fellow cast members. If you're looking for abs, a British accent and some of the most awkward dance moves you've ever seen, David's TikTok account is definitely worth a follow.

The breakout stars of Too Hot to Handle have been Australian heartthrob Harry and Francesca, the sexy Canadian model who immediately captured his attention — and stole his heart as well. As a result, there have been a massive number of girls on TikTok who have used the platform to declare their love and attraction to Harry, even going so far as to sloppily photoshop themselves into scenes of him and Francesca. In addition to celebrating those fans, Harry has shared plenty of TikToks about the "traumatic experience" that he had on the island ... namely, that he wasn't allowed to hook up with anyone.

Not to be outdone by her boyfriend, Francesca has also been having a lot of fun on TikTok. She's posted multiple times about the show, joking about how she and Harry almost lost all the money thanks to their inability to keep their hands off each other. But, she's been active on TikTok for a while, even joking about how millennials are sneaking on to the Gen Z platform.

As well as posting videos of him enjoying "boat quarantine" with his brother, Bryce has also used the "something traumatic" meme to joke about his time on the Netflix series. "Too Hot to Handle got me in my feels!" he wrote, alongside a video of himself watching back a conversation with Chloe on the beach. Luckily, he was able to twerk it out and feel a little better, because TikTok dances are the 2020 version of "shaking it off."

Nicole's page is full of pop culture references, like this one TikTok repurposing an iconic Bridesmaids scene and turning it into what happens when you get busted taking an unnecessary walk during quarantine. She also posted a video commiserating with "Single People" in March, which is especially interesting given the fact that Bryce just revealed they've been seeing each other.

Rhonda Paul has a TikTok account, but she doesn't appear to be very active on the platform. She posted a few fun dance videos — including the "Savage" Challenge, of course — before Too Hot To Handle premiered in April, but since then her page has been quiet. As for Sharron Townsend, who coupled up with Rhonda on the show, he has a TikTok page, but hasn't yet posted any videos.

Based on his sparse profile, Kori doesn't seem to be that into TikTok. He has, however, used it to share his questionable dancing skills, and some shirtless videos for those fans still thirsting for more.

Kelz, aka "The Accountant," just started using TikTok. So far, he's got a thirst trap video of him taking a morning run, and a Q&A video showing off his German skills. He also says he wants to learn French, so, French fans listen up!

Too Hot to Handle is available now to stream on Netflix — and if, during your inevitable marathon of the show, you start to feel like things are completely absurd, well, at least you can take comfort in the fact that the cast feels the exact same way.