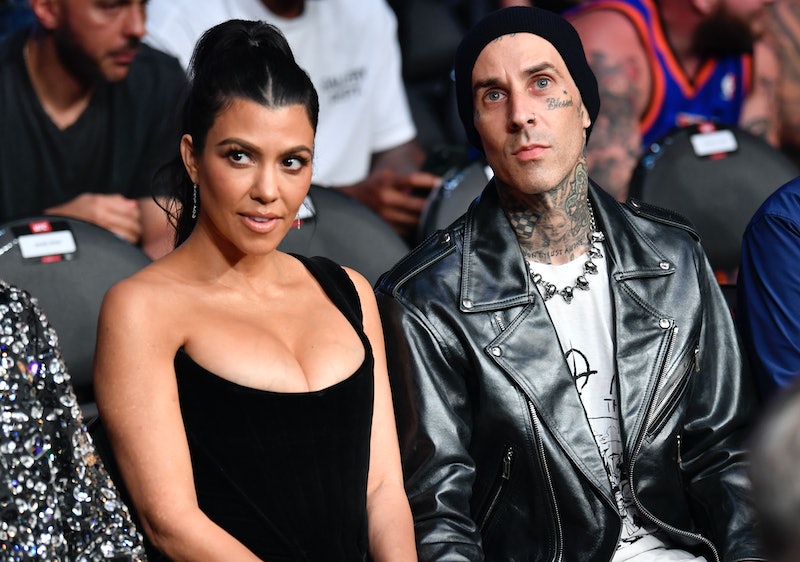 “All The Small Things” drummer Travis Barker recently proposed to Kourtney Kardashian after less than a year of dating. Now, with the power couple headed down the aisle sometime soon, fans are interested in learning every little detail about their personal lives, including how much they’re worth separately and together. The pop-punk musician and the reality TV star are rich and famous on their own, but when combined, their net worths increase dramatically.

As Bustle previously reported, Kardashian has an estimated net worth of $65 million, with that sum increasing year after year. So how much is the Blink-182 powerhouse worth separate from his soon-to-be wife? A lot more than most people might realize.

What Is Travis Barker’s Net Worth?

Perhaps the most successful drummer in pop-punk history, Barker has an estimated net worth of $50 million, according to Celebrity Net Worth. His income is thanks to a healthy mix of his older material produced with Blink-182 as well as new projects with some of the hottest up-and-coming acts in music.

Barker is best known as a member of the pioneering pop-punk band Blink-182. He wasn’t one of the original three musicians in the group, but after stepping in to play with the act after their first drummer took a break, the chemistry between Barker, Mark Hoppus and Tom DeLonge was undeniable. It didn’t take long before he joined the trio permanently, and he’s now been drumming away for more than 20 years.

Blink-182 is one of the most successful pop-punk bands in history, if not the most-recognized name in the field. The group has charted eight top 10 albums in the U.S., including two that went all the way to No. 1. They have scored an incredible number of successful singles on the rock and alternative charts, and crossover smashes — like “What’s My Age Again?,” “All The Small Things,” “The Rock Show,” and “I Miss You” — were welcomed warmly by radio stations across America and remain staples of the genre. As a co-writer on many of the band’s biggest singles, Barker continues to earn royalties whenever they’re played, which is constantly.

To date, Blink-182 has reportedly sold 50 million albums worldwide, according to their current label. In America, they have sold a certified 10 million full-lengths in addition to millions of singles. On Spotify, the band counts 12.6 million monthly listeners, and seeing as all of their most popular tracks have racked up hundreds of millions of plays, it’s not hard to imagine they have already earned billions of plays on the largest streaming service in the world. More than 2.1 billion views on YouTube also brings in quite a bit of money.

Blink-182 has participated in at least 15 tours across the U.S., with some making their way to other countries. Barker has been a part of almost all of them, though throughout the years there were times he was unavailable to play with the band, as he was injured or unable to fly to certain territories because of his fear of flying. The band has earned tens of millions of dollars on the road.

All of the members of Blink-182, current and former, are known to be very busy with side projects and other interests, but none are more prolific than Barker. Throughout the decades, he has become one of the most in-demand producers, songwriters, and drummers in the business, and he’s made a name for himself by partnering with up-and-coming rock acts, forming several bands and even working with some rappers and hip-hop stars. In fact, Barker is largely responsible for ushering in the trend of artists blending pop-punk and rap.

Barker has previously found success as a member of the bands The Transplants, +44, Box Car Racer, TRV$DJAM, The Aquabats, Goldfinger, and Expensive Taste. He has also worked behind the scenes on projects with artists such as Yelawolf, Asher Roth, Suicideboys, Nothing,Nowhere, KennyHoopla and perhaps most notably, Machine Gun Kelly. Barker helped the former hip-hop star change directions, and in doing so, score his first No. 1 album in America with Tickets to My Downfall. Barker also released one solo album, 2011’s Give the Drummer Some, which became a surprise top 10 success.

The drummer makes money from all of these projects, as he earns credit as a producer and songwriter, which means he collects a tiny fraction of a cent anytime someone streams any of the tunes featured on these projects. For some of them, he likely also takes home a flat fee for being involved or playing, as some session musicians or producers often do.

In between all of his many recording projects, Barker has also found the time to launch several businesses and work with some top brands. All that activity helped him become richer as well as cemented his status as a top-tier rocker. In 1999, as Blink-182 was just taking off, Barker founded the clothing line Famous Stars & Straps, and while many musician-run labels of the sort from that era have come and gone, this one has managed to stick around. Impressively, 20 years on, the brand is still going strong.

Barker has also launched two record labels, and both have enjoyed some success. In 2004, he created LaSalle Records, which released projects from his side bands Transplants, Expensive Taste, and TRV$DJAM, as well as acts like the Kinison and Prayers. It appears the company has fallen by the wayside, while his newer label DTA Records entered into a joint venture with Elektra Records in 2019. So far, both Barker and rising alternative rocker and TikTok star Jxdn have dropped music on the brand. As the founder and owner, Barker likely earns a cut of everything.

Earlier in 2021, Barker branded his own line of cannabinoid health and wellness products appropriately named Barker Wellness. With the industry growing by leaps and bounds and with products like tinctures ($65) and hoodies ($125) running at premium prices, it’s easy to understand how sales could quickly pick up for this fairly new venture.

Due to his status as one of the most influential and respected drummers in rock, Barker has signed on to promote many products that align with his personality. Throughout the years, Barker has added to his bank account by teaming up with brands like DC Shoes, Zildjian cymbals, Orange County Drums and Percussion, and Drum Workshop. While financial sums aren’t publicly available, being associated with the Grammy nominee doesn’t come cheap.

Barker has also increased his net worth in the past with other projects such as his memoir Can I Say: Living Large, Cheating Death, and Drums, Drums, Drums, and his MTV reality show Meet the Barkers. The program followed the musician and his then-wife Shanna Moakler throughout their daily lives, and it ran for two seasons, after which point the couple went their separate ways.