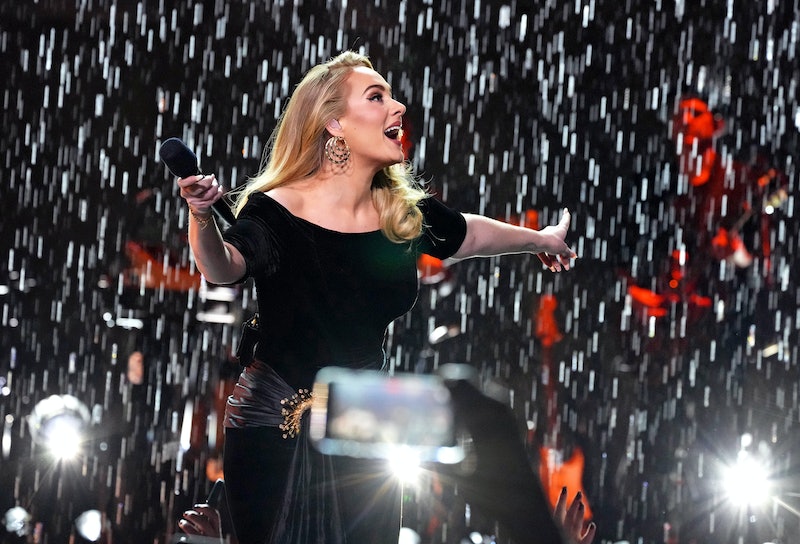 Adele has definitely seen the video meme mashing up her “Water Under the Bridge” song with Megan Thee Stallion’s “Body” dance. Almost a year after the fictional collaboration went viral, Adele cheekily responded during a performance of “Water Under the Bridge” on the opening night of her Las Vegas Residency by mimicking the choreography and laughing as she did it, much to her audience’s delight at The Colosseum at Caesars Palace. “Yes, Adele keeps up with TikTok trends,” Twitter user @BrandonLopezTV said in a tweet that included a video of Adele’s attempt.

For those of you who don’t remember, last year someone asked why Adele didn’t have any backup dancers on Twitter. User @zvxkviru answered in an unexpected way by creating a mashup of “Water Under the Bridge” with Megan Thee Stallion’s 2020 American Music Awards performance of “Body.” The video went viral, dozens of memes ensued, and the creation of a “Body” x “Water Under the Bridge” remix, which incorporates a rap verse, even came to fruition

Fast-forward a year to November 2022, and Twitter was thrilled to see Adele recreate the meme, with fans clamoring for more ASAP. “When Megan Thee Stallion shows up at Adele's residency and they do the ‘Water Under the Bridge’ mashup live THEN WHAT,” @kswelty asked. “We really need the official Adele x Megan Thee Stallion collaboration,” @AdeleGlobaI said. “adele doing the megan thee stallion dance while singing ‘Water Under the Bridge’ was so unexpected but iconic,” @rosesforwIne chimed in.

Megan Thee Stallion is also aware of the viral meme. She told People in February that she’s down for a collaboration. “If Adele wants me to come get on the track, be the dancer, I’m there, I’m here for it,” she said. “Somebody tell her to call me because I'm ready!” We’re ready, too.

More like this
"Lavender Haze" Star Laith Ashley Breaks Down Filming With Taylor Swift
By Jake Viswanath
Who Is Murray Bartlett Dating? 'The Last Of Us' Star Is Extremely Private
By Alyssa Lapid
15 Photos Of 'The Last Of Us' Star Pedro Pascal That Cement His Zaddy Status
By Radhika Menon
Twitter Wants To Dance With Anne Hathaway At Paris Fashion Week
By Alyssa Lapid
Get Even More From Bustle — Sign Up For The Newsletter
From hair trends to relationship advice, our daily newsletter has everything you need to sound like a person who’s on TikTok, even if you aren’t.