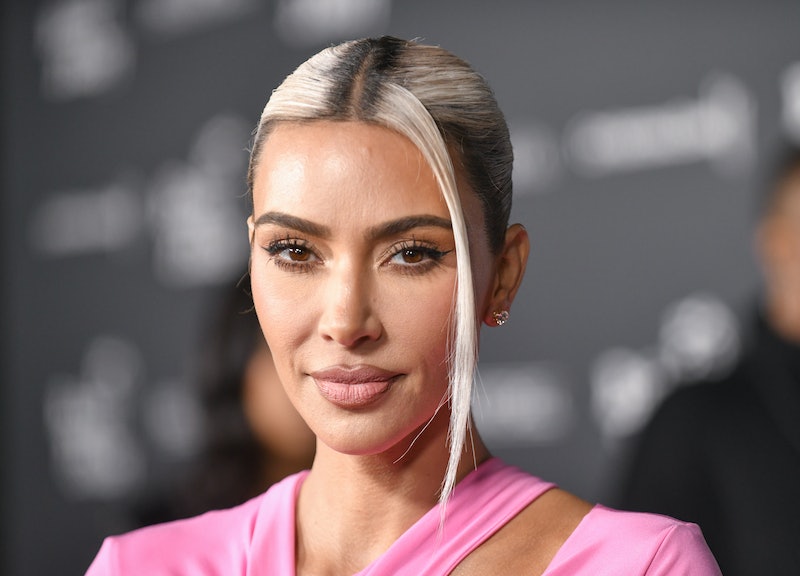 Much like her mom, Kim Kardashian, North West knows how to break the internet. Since the nine-year-old launched her joint TikTok account with Kim (much to father Kanye West’s chagrin), her posts have been going viral. (Remember her take on the viral Wednesday dance craze?) This Christmas, one of North’s videos went viral for the wrong reasons and has Twitter upset with Kim.

Ahead of Christmas, North posted a TikTok video of their two Pomeranians, Sushi and Sake. Set to the tune of “Baby It’s Cold Outside,” the video showed the two dogs in some sort of gated playpen bedecked with a Christmas tree, stuffed toys in Santa outfits, and stockings. The dogs themselves were wearing little outfits and were running around and eating. But commenters were quick to point out that it looked like the dogs were being kept in the garage and cried foul over the dogs’ assumed treatment. Bustle reached out to Kim Kardashian’s team for comment but did not hear back at the time of publication.

The video now appears to be deleted, which riled social media users even more, especially since fans assume Kim manages the account. TikTok user needthedeets, who was able to save and repost the video, speculated, “This video was deleted from North’s account. Is it because Kim Kardashian doesn’t want people to think they keep their dogs in the garage?”

Naturally, the idea that Kim, whose estimated net worth is $1.8 billion, keeps her dogs in a garage incensed people. And they took to Twitter to voice out their opinions. One Twitter user wrote, “Kim Kardashian has her dogs living so ghetto. As a billionaire, I expected her dogs to be potty trained and have their own mini houses with A/C. She has them living in a garage with Walmart dog beds and pee pads…”

Dog owners, especially, started posting about how much better they think their dogs are treated. User esra_jassim wrote, “I can confidently say my dogs have a better life than kim kardashian’s dogs.”

Meanwhile, some gave slightly more constructive advice. “Are your Pomeranian’s kept in your garage if this is true they deserve better care, and training they are inside dogs!!!!!”

Not everyone was quick to place blame on Kim, though. A few commenters on the TikTok video gave some thoughts as to why the dogs are likely fine. “They look happy,” one commenter said. While some guessed that the dogs in the garage may be a temporary situation. “They could have put them there temporarily when they had a holiday party,” one TikTok user noted. Another speculated it’s likely part of crate training. “It’s definitely heated, and crate training a dog is safer than having them run around without supervision. My dog loves his crate,” the comment read.

It’s not the first time the dogs have appeared on the family’s social media. In September 2019, Kim posted about the new puppies before North finalized their names — and users would be happy to know they were in the kitchen. Two years later, in March of 2021, mother and daughter were snuggling with Sushi and Sake at home.

Here’s to hoping Kim’s doggos are happy and thriving. And enjoying Kim’s mansion.