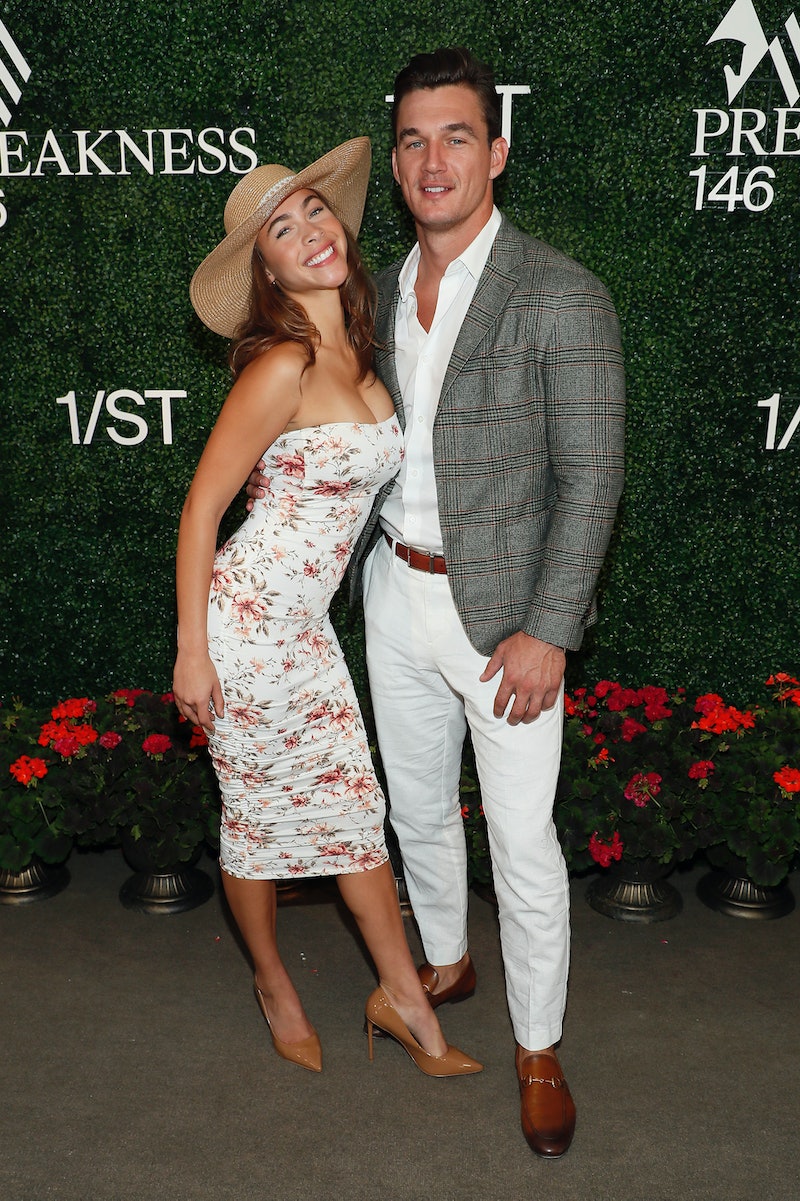 Less than two weeks after publicly declaring his love, Tyler Cameron broke up with model Camila Kendra. “Things were going well until they weren’t,” an insider told Us Weekly. “Friends were surprised things ended so quickly.” Cameron and Kendra dated for eight months, but according to a Page Six source, “things took a turn.” Bustle has reached out to Cameron’s rep for comment and will update this story if we hear back.

According to Us, Cameron and Kendra unfollowed each other on Instagram earlier this month, prompting breakup speculation. The outlet also reported that the model has since unfollowed his brother as well. Last month, Cameron appeared on an episode of Watch What Happens Live, where he shared details about their first date and confessed that he was “very in love.”

“She said ‘I love you’ and then I came later,” the 28-year-old reality star told host Andy Cohen. “It was at a moment of pure love, like, it just came out. You know what I mean? It was not the way I expected it, but it was beautiful.” The Bachelorette Season 15 alum also revealed that he “wanted to say it [earlier],” but he was afraid to take that step. “I knew I loved her,” he admitted.

When asked how they first met, Cameron revealed that he slid into Kendra’s DMs and they discovered that they were both from Florida. Then they went on “the best date” Tyler has ever been on. “We went to a restaurant, and we sat there, we just talked for hours,” he said. “We couldn’t even look at the menu, so I just told them, like, ‘Bring whatever.’ We just talked, hung out. We sat there for four hours. I had a great night.”

Although they hit it off, Cameron revealed that they didn’t share their first kiss until the fifth date. It’s unclear how many times they went out before E! News first broke the news in January that they were spotted holding hands in New York. At the time, a source told the outlet that they drove up from Florida together but were not yet an official couple. “They are both into each other but it’s a stretch to say she’s his girlfriend,” the insider said at the time.

Before Kendra, Cameron was in several high-profile relationships. After dating Hannah Brown on The Bachelorette, the 28-year-old was linked to supermodel Gigi Hadid, whom he reportedly dated for around two months before calling it quits. Their brief fling came shortly after Cameron was spotted leaving Brown’s Los Angeles home, which gave Bachelor Nation renewed hope that they would possibly rekindle their romance.

“[After the show, Hannah and I] saw each other in LA, where yes, I slept at Hannah’s house, but we didn’t sleep together,” he said on WWHL while promoting his new book, You Deserve Better. “We weren’t in a relationship at that point, and we definitely weren’t boyfriend and girlfriend.” After his split with Hadid, Cameron and Brown spent a lot of time in quarantine together but insisted they were just friends.

If you think now is the time for Cameron and Brown to get back together, think again. Brown is currently dating 33-year-old model Adam Woolard, and their respective Instagram accounts prove that they’re very into each other. “Many have seen you shine on TV, but few get to see how hard you work… how thoughtful you are… and how you care for others… every single day,” Woolard wrote alongside a photo of the happy couple. He has also shared pictures of them celebrating his birthday, spending time together on the beach, and cozying up at home.

More like this
Kanye West Revealed The High Percentage Of Time Kim Kardashian Raises Their Kids
By Brad Witter
Bachelorette Gabby Kissed Her New Fiancé On 'Dancing With The Stars'
By Jake Viswanath
Where Is Former Bachelor Host Chris Harrison Now & What Is His Net Worth?
By Hugh McIntyre
Everything To Remember About Lace Morris Before 'Bachelor In Paradise' Season 8
By Grace Wehniainen
Get Even More From Bustle — Sign Up For The Newsletter