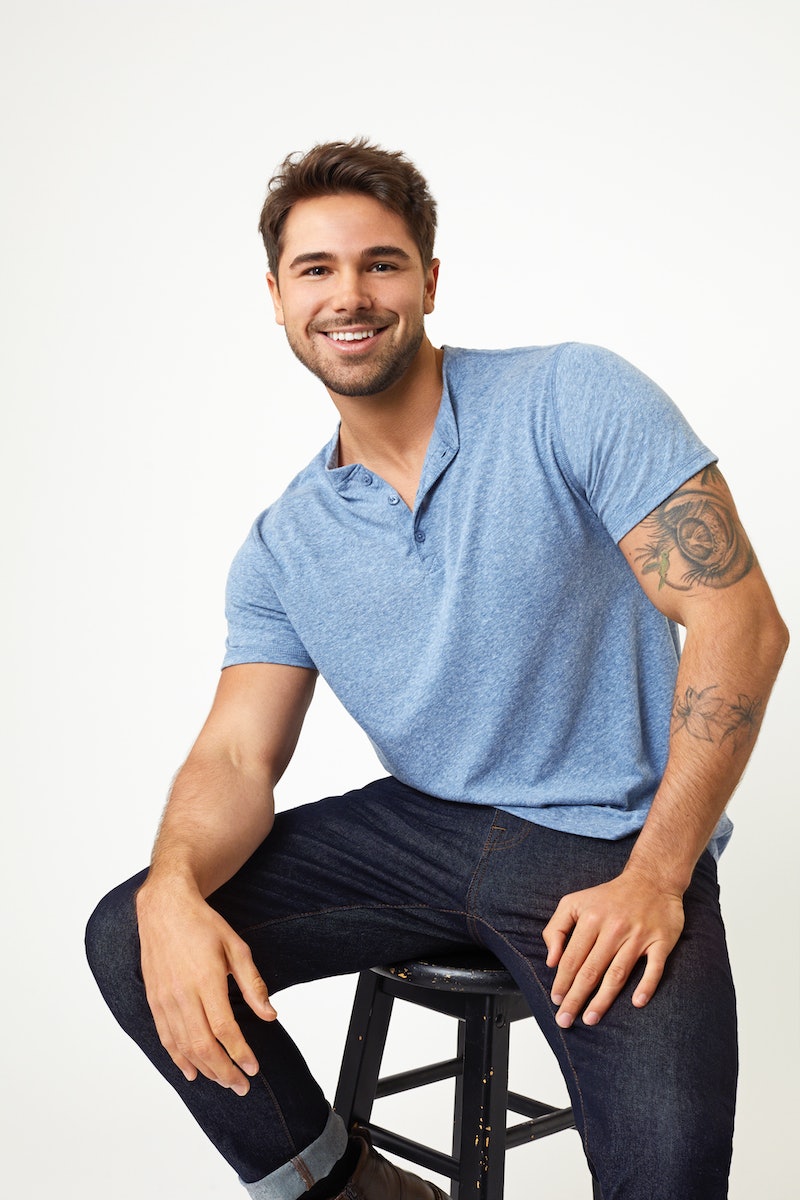 During Tyler Norris and Rachel Recchia’s hometown date on The Bachelorette, Rachel was overwhelmed by the tight-knit nature of Tyler’s Jersey Shore community — and after the tearful breakup that followed, Tyler started to feel the pressure himself. “Being from a small town, everybody wants to know what’s going on, wants to talk to you,” he recalls to Bustle over Zoom. “I was just like, alright, I gotta get out of here.”

Tyler’s antidote was a guys trip to Florida with his dad where he could “decompress” and process the last two months. It was during that trip that producers asked Tyler if he’d like to participate in Bachelor in Paradise Season 8. While it wasn’t an immediate decision, Tyler opted to hit the beach for one simple reason. “Rachel, ultimately, at the time, I thought she was gonna find her happiness. So, you know, I want to find that too.”

So far on Paradise, Tyler seems to be doing just that. Shortly after arriving at the women’s new resort following that big cast shake-up, he got close to Brittany Galvin.

“I’m so glad I met you,” he told Brittany during the show’s Oct. 18 episode before the pair promptly started making out. The next day, Shanae Ankney took Tyler out for a very fun date that she hoped might end in a Boom-Boom session, to no avail. However, as Tyler tells Bustle, this doesn’t appear to be another Paradise love triangle because he really only has eyes for one woman right now.

Below, Tyler opens up about the Paradise twist, where he stands with Rachel, and what we didn’t get to see from his conversation with Brittany.

I know you wrote that kind note to Rachel on Instagram after you were sent home. Did you ever reach out to her after the breakup with Tino?

I’m good friends with Rachel now. After the show and meeting a lot of the girls from her season down at the beach, making friends with them, and also becoming closer with Rachel, it’s been awesome. Still, to this day, I think she’s absolutely amazing.

During the latest episode, some of the new guys that joined Paradise with you said they didn’t expect to meet women who already made connections. What were you expecting to happen — did you know that you were crashing something already in progress?

Originally, no, I did not. I thought I was going down to the beach to meet people and everything. Not until the night of, did I find out. And also, there were some of my friends down at the beach. So, not knowing where their heads were at in their relationships — I might be meeting somebody that they might be really interested in.

Were there women you were hoping to see in Paradise — and if so, was Brittany on your list?

No, I didn’t have anybody on my list going down to the beach — because on my list prior, it was Rachel. And we saw how that worked out.

How would you describe your relationship with Brittany on the show so far?

The first night, we talked for hours. Everyone else went to bed, and we were up until 3 or 4 a.m., just talking. Right then and there, I was like, OK, obviously I have something good. We can talk about anything. It’s fun. My head was just thinking that I found something pretty awesome.

Did you learn anything unexpected about each other in that conversation?

Yeah, it’s funny. She was like, ‘So what are you, exactly? What’s your nationality?’ And I’m a mutt, so I got a bunch of different things. But literally, right before the show, my brother did Ancestry.com and found out that we’re partially Filipino, and she’s Filipino! So she’s like, ‘No way, my mom would absolutely love that.’ I was like, ‘Well, I’m not that much.’

And you also had that great date with Shanae. How would you describe that connection?

She was not anything like I thought she was going to be — I remember watching Clayton [Echard]’s season. But she was so nice, and she was cool, and we had a lot of fun. In my head, I just thought to myself, I ventured out, got the chance to meet somebody else, and go on an awesome date. But at the end of the date, I was just thinking I want to see Brittany.