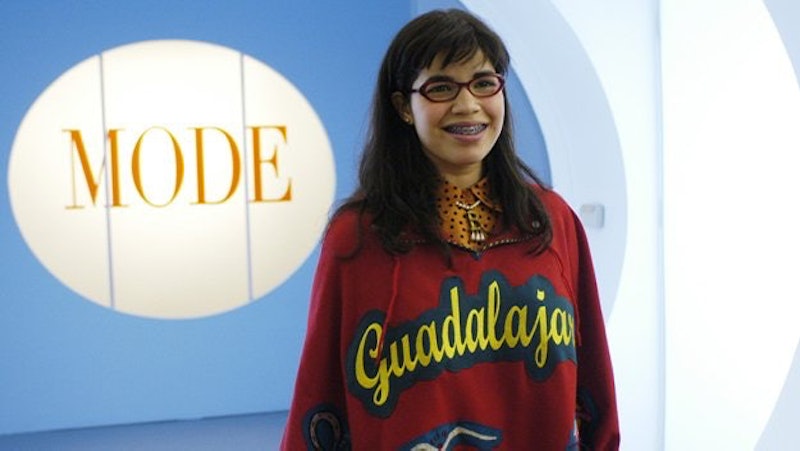 Noughties reboots are in. See the return of Gossip Girl, iCarly, and Sex and the City for proof. And, rumour has it, another classic 2000s comedy will be returning to screens near you in the form of an Ugly Betty reboot – or reunion.

Speaking to TV Tonight, Eric Mabius, who famously played magazine boss Daniel Meade, said “there’s something being discussed,” which is enough to send fans of the America Ferrera-helmed show reeling. “But I’m not at liberty to say,” the actor added. “We had an abrupt ending and I think that we all felt that we didn’t have enough time to finish telling the stories that needed to be told.”

Adapted from a Colombian telenovela by Silvio Horta, the show ran for four seasons between 2006 to 2010. Focusing on Betty Suarez, a young and ambitious Mexican-American woman from Queens who gets a job at a fancy fashion magazine in New York, the show was celebrated for its representation of both Latin-American & LGBTQI characters. The series won two Golden Globes, too: one for best comedy series and one for Ferrera, per Variety.

“I think Ugly Betty was ahead of its time,” continued Mabius, “and I think that it would be more timely right now than ever. I continue to be proud of that, to be part of such talent.”

Vanessa Williams who played baddie Wilhemina Slater on the show, previously spoke to GAYTimes about her idea for a reboot – though she was a little less positive than Mabius. “I don’t know whether it’d be organic,” she said. “America is now mid-30s – where would Betty be now? Initially, when Betty went to Mode and ended up here in London, I was saying to Michael that we should do Mode UK and come here, but we couldn’t get that going…”

Of her own character’s future, Williams imagined a single and fabulous life for Slater: “She’s still not married because she’s way too much to handle. She’d be alone, living in her fabulous penthouse and maybe travelling the world.” Marc ever at her side, though.

If a reunion were in the works, perhaps fans would finally get real answers. Do Daniel and Betty end up together after their Trafalgar Square date? Is Mode UK a thing? Does the fashion title survive without Daniel at the helm? What happened to Wilhelmina? And what is Marc wearing now?

“Hopefully with enough groundswell, they may even bring the show back for a little bit,” said Mabius. Consider our interest seriously piqued.

More like this
Olivia Colman Stars In First-Look Trailer For BBC's 'Great Expectations'
By Sabah Hussain and Sam Ramsden
Everything To Know About The 'Daisy Jones & The Six' TV Series
By Maxine Harrison and Brad Witter
6 'Happy Valley' Easter Eggs You May Have Missed
By Sophie McEvoy
Claire Foy Spoke Out About 'The Crown's Gender Pay Gap
By Sam Ramsden
Get The Very Best Of Bustle/UK
Sign up for Bustle UK's twice-weekly newsletter, featuring the latest must-watch TV, moving personal stories, and expert advice on the hottest viral buys.