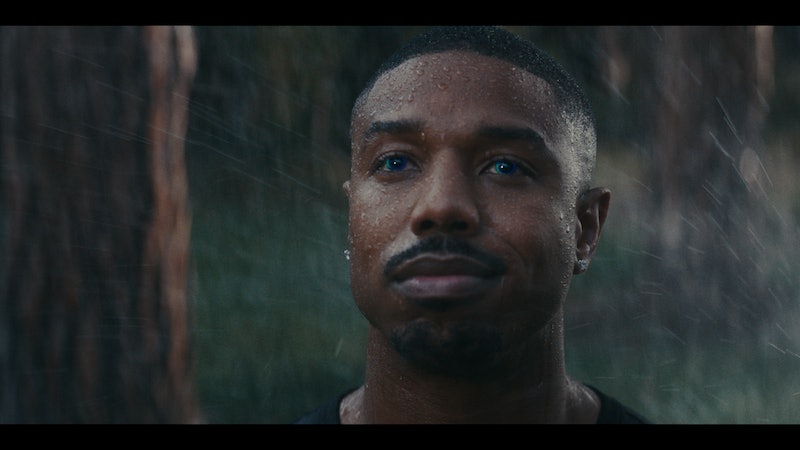 It's not uncommon for people to develop emotional attachments to their fave tech devices. But a new Super Bowl ad for Amazon featuring Michael B. Jordan, unveiled on Feb. 2, takes that concept to a whole new level. For his debut Big Game commercial, “Alexa’s Body,” Jordan becomes the physical manifestation of the AI virtual assistant. As it turns out, his sexy appearance turns everything from cooking to lawn care into an aphrodisiac.

The commercial begins with a customer admiring Alexa's sleek exterior. "I mean, I literally couldn't imagine a more beautiful vessel for Alexa to be inside," she starts, before noticing an ad for Jordan's upcoming action movie, Tom Clancy's Without Remorse, on the side of a bus. The next thing she knows, Jordan is in her kitchen, advising her on ingredients before shifting to her backyard for a sprinkler shower. "Things are getting way too wet around here," her jealous husband slyly remarks at one point. "Alexa's Body" ends with Jordan sitting across from the customer in her bathtub, reading a Bridgerton-like romance novel over candlelight. Who knew the same piece of technology that my relatives screech at during the holidays could be so sensual?

Jordan's role as a sultry Alexa arrives during his reign as People's 2020 Sexiest Man Alive. He was bestowed with the honor last November, a few short months before he went Instagram official with his new girlfriend, Lori Harvey. The pair confirmed their relationship on Jan. 10 with complementary black-and-white posts. According to a People source, Jordan and Harvey had spent "all the major holidays together in November and December" while keeping their romance low-key.

Even Family Feud host Steve Harvey (Lori's stepfather) has signed off on the pairing. "I like this one," he said of Jordan during the Friday, Jan. 22 episode of iHeartRadio's The Steve Harvey Morning Show. "I still got my eye on him. I mean, I like him, but like I say to all of 'em, 'I might like you, I might approve of you, but I got a thumb-size section of my heart filled with nothing but pure hatred for your ass. Just in case I need it.'"

Since going public with their relationship, both Harvey and Jordan have been more openly affectionate on the 'gram. On Jan. 13, Jordan paid tribute to his girlfriend on her birthday with a pair of snowy photos. "10:10 HBD 🐢 #24," he captioned the series. Harvey also voiced her seal of approval for Jordan's Super Bowl ad. After he posted a clip of the commercial on Instagram, she supportively wrote, "Sign me up for that Alexa 😂🤤😍😍😍 congratulations baby!!! 🔥🔥🔥"

In case you want to watch Jordan's objectively good looks on a bigger screen, the ad will play during a minor football event this Sunday. To watch the game (and replay Jordan's commercial a few thousand times), Fire TV users can stream both live on the CBS All Access app or for free on the NFL App or the CBS Sports App by saying, “Alexa, find CBS Sports,” or “Alexa, find the NFL App.” Full disclosure: Michael B. Jordan probably won't magically appear in your living room, but one can dream.