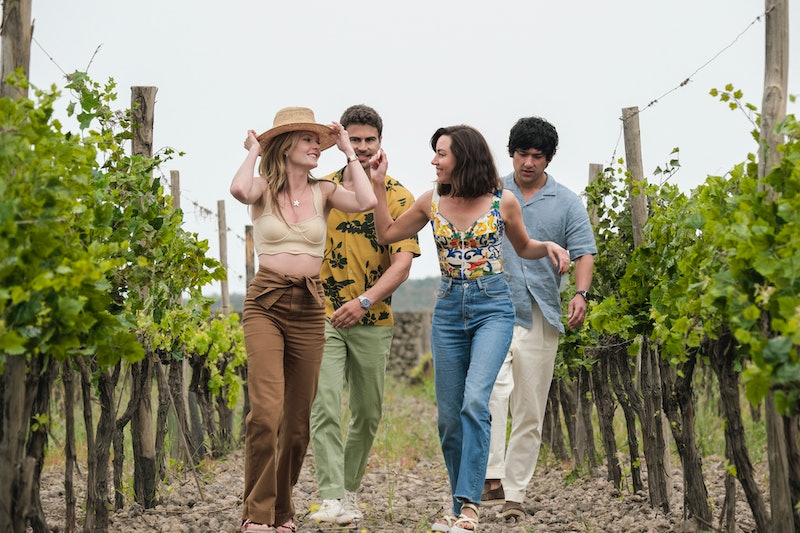 The finale of The White Lotus Season 2 may have already aired, but the Italian party vibes will live on forever. On Dec. 11, ahead of the final episode, Twitter user @girlbosskenroy shared a behind-the-scenes video of the cast dancing and partying together. “god i want to party with the white lotus cast” they wrote with the clip, which amassed almost 300,000 views as of writing. Many beloved cast members, such as Jennifer Coolidge, Haley Lu Richardson, Theo James, and Simona Tabasco are seen dancing, singing karaoke, and enjoying some drinks, presumably in Italy between filming the HBO Max show. “A Far L'amore Cominicia Tu” by Raffaella Carrà plays over the montage, and suddenly we’re back in Taormina, Aperol Spritz in hand without a care in the world.

Twitter users and White Lotus fans alike commented on the video, experiencing major FOMO. “I want to go to there,” one user said. “just ugly dancing and being loud and obnoxious... i want in,” another added. The vibes are immaculate, making us want to dance as much as the opening credits song does.

Another clip emerged online ahead of the finale as well, featuring Coolidge and Este Haim, the latter of whom served as a musical consultant for White Lotus Season 2. Here, they sang and danced to ABBA’s “Mamma Mia,” and Coolidge donned a fur hat. Federico Ferrante, who played White Lotus employee Rocco, can also be seen dancing along. @gibsonoma shared the clip, writing: “This video of Jennifer Coolidge barging in on Este Haim dancing to ‘Mamma Mia’ while on location for #TheWhiteLotus is my new favorite video on the internet.”

Again, Twitter loved the video, calling it “hugely important,” and labeling Coolidge as a “freaking treasure.”

Spoilers ahead for The White Lotus Season 2 finale. These The White Lotus BTS videos are bittersweet following the explosive finale, where fan-favorite character Tanya died, proving the American Cowboy theory correct and the signs ultimately foreshadowing her death. She was the body found in the opening scene. The show’s creator, Mike White, explained in a featurette after the episode why he killed off the beloved half-a-billionaire. “Not that I really wanted to kill Tanya, because I love her as a character, and obviously love Jennifer [Coolidge], but I just felt like ... we could devise our own operatic conclusion to Tanya’s life and her story.”

He added, “It felt like she needed to give her best fight back, and that she, in a way, had some kind of victory over whoever was conspiring to get rid of her ... and that after she successfully does that, then she just dies this derpy death. And it just felt like, that’s so Tanya.”

In the meantime, we’ll be living vicariously through these BTS videos.

More like this
'GoT' Star Emilia Clarke Says She "Just Can't" Watch 'House Of The Dragon'
By Brad Witter
Here’s What Happens To Bill & Frank In 'The Last Of Us' Video Game
By Brad Witter
The Black Lotus Staff Has "Had Enough" In The 'White Lotus' Spoof From 'SNL'
By Brad Witter
Here’s Why Danny Masterson’s Hyde Isn’t In 'That '90s Show'
By Brad Witter
Get Even More From Bustle — Sign Up For The Newsletter
From hair trends to relationship advice, our daily newsletter has everything you need to sound like a person who’s on TikTok, even if you aren’t.