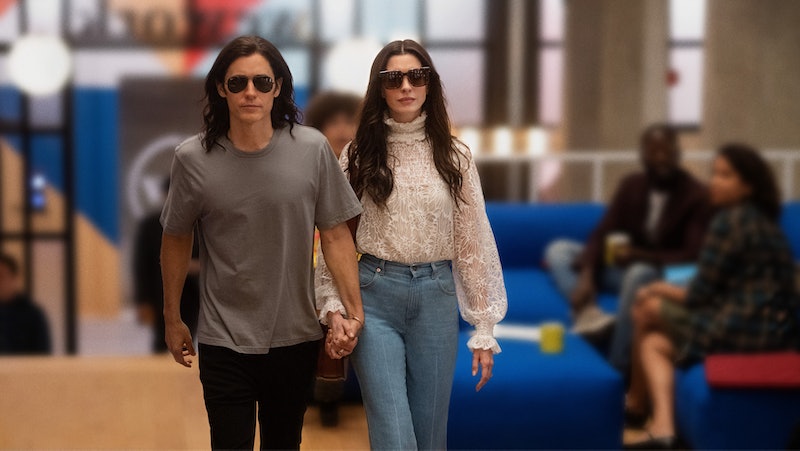 After starring in two of 2020's most-discussed (for better or worse) films, The Witches and Locked Down, Anne Hathaway's next project is a change of pace: a TV role. The actor is set to star alongside Jared Leto in Apple TV+'s WeCrashed, a series about the rise and fall of the shared workspace startup WeWork. Based on Wondery's podcast of the same name, the series marks Hathaway's first time as a series regular on the small screen since her acting debut in Fox's 1999 sitcom Get Real. It will also be the 30 Seconds To Mars performer's first role since portraying Paolo Gucci in House of Gucci — and, brace yourself, he’s doing another accent. Leto and Hathaway portray Adam and Rebekah Neumann, respectively, the husband and wife behind the brand.

You’ve probably been hearing about the series for quite a while. If you’ve been impatiently waiting to watch the Oscar winners in action, you’re in luck: the forthcoming series, seemingly reminiscent of stories like The Social Network and The Big Short, is right around the corner. As announced along with a new teaser, the WeCrashed premiere date is March 18. (According to Deadline, the first three episodes will drop that Friday, with the final five episodes airing weekly after that.)

The teaser sees the couple howl and manifest together while Leto sports yet another physical transformation for his role — but a much subtle one than his Gucci gig, comprised mainly of a darker eye color. Joining Leto and Hathaway will be Kyle Marvin as Miguel McKelvey, WeWork’s co-founder, and America Ferrera as Elishia Kennedy, described by Deadline as “a brilliant young entrepreneur seduced into joining WeWork whose life is turned upside down as a result.” Black Widow’s O-T Fagbenle will also star as Cameron Lautner, “a partner at a powerful investment firm who is tasked with trying to instill discipline at WeWork and prepare it for its upcoming IPO.”

What Happened To WeWork?

With Lee Eisenberg and Drew Crevello serving as the co-writers, executive producers, and co-showrunners, WeCrashed is slated to explore the story of WeWork, a company once valued at almost $50 billion that provides coworking offices. WeWork's plans of going public in late 2019 were shut down as co-founder Neumann resigned from his position amid accusations of inconsistent management practices and questions regarding the company's profitability. Softbank and JPMorgan's roles as investors in WeWork also raised eyebrows, especially considering Softbank once intended to bail out the company, which resulted in a lawsuit.

Another WeWork TV Show Is Coming

Can’t get enough of the messy startup saga? WeCrashed isn't the only television project about WeWork's demise that's currently in development. Chernin Entertainment and Endeavor Content recently announced a forthcoming miniseries about the company and Neumann's exit based on a book that's currently in the works from Wall Street Journal reporters Eliot Brown and Maureen Farrell. The series hasn't finalized a title or secured a network thus far, but You're The Worst's Stephen Falk is on board as creator and showrunner, and Succession's Nicholas Braun is set to portray Neumann.

This article was originally published on Jan. 29, 2021