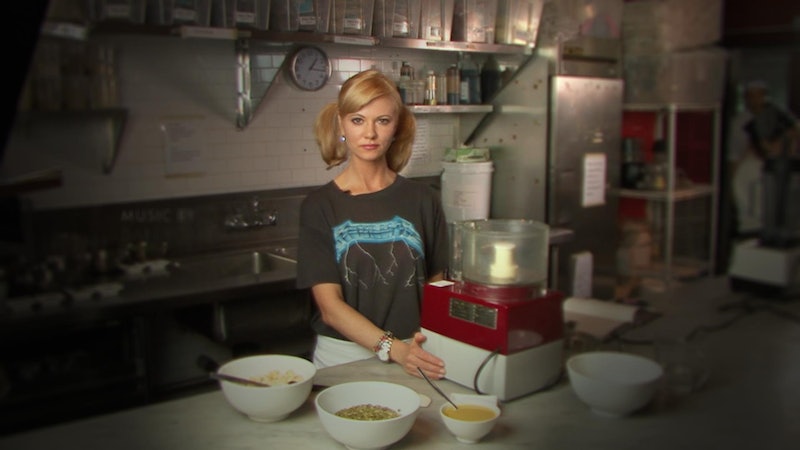 Netflix is the unofficial streaming home for true-crime stories. You can find everything from Tiger King to The Tinder Swindler, and the streaming giant’s latest show might be one of the wildest yet. Bad Vegan: Fame. Fraud. Fugitives. is a four-part docuseries investigating former prominent NYC vegan restauranteur Sarma Melngailis and her scam artist ex-husband, Anthony Strangis, who embezzled millions from her restaurant and their staff. Amid the doc’s popularity, the subject of the series is now speaking out.

The duo met on Twitter in 2011 when Strangis — using the false identity “Shane Fox” — contacted Melngailis and convinced her that he could not only help her build her restaurant empire, but also make her precious pitbull dog Leon immortal. The only stipulation was that she follow his every order. Strangis claimed to be part of a cult-like organization called “The Family,” which would provide her special powers and protection, but only with her cooperation. Melngailis, who was deep in debt when she first met her future husband, was the perfect desperate, vulnerable victim. According to the new docuseries, they stole more than $6 million from her business, staff, family, and friends.

Bad Vegan is comprised of interview footage with Melngailis from 2019 after her release from Rikers Island jail, where she served four months for grand larceny, criminal tax fraud, and a scheme to defraud. But Melngailis claims that the Netflix series didn’t get everything right. On her personal blog and via Instagram, she tells her side of the story, stating that 90% of the money referenced at the end of the docuseries “went to re-open the restaurant and make payments.” Melngailis also found the ending “disturbingly misleading,” as the docuseries suggests that she is still in touch with Strangis, which she refutes.

In an interview with Vanity Fair’s Allen Salkin, who covered the case in 2016, Melngailis openly discusses her dissatisfaction with the onscreen portrayal of her marriage. “The impression in the doc is I intentionally married Anthony so he could transfer me money. That is completely not the case. At some point, Anthony did some of his mindf*ckery and got me to marry him,” she says. She claims she hasn’t seen her ex-husband since they were both dropped off at Rikers. (Strangis has also denied having contact with Melngailis. In a statement to E! News, his lawyer holds, “He's got a job, uses his name, this is behind him, and she's behind him.”)

Still, Melngailis isn’t suggesting the entire docuseries is bad. Her blog post concludes with a reminder that not everything viewers see is as it seems: “There’s a lot Bad Vegan gets right, but it’s hard not to get stuck on the things that aren’t right or leave an inaccurate impression.” She teased another blog post in which she’d “clear up more,” though no further statements have been made.

More like this
The Mysterious Gunther Corporation From 'Gunther’s Millions' Has Dissolved
By Brad Witter
Ashton Kutcher Wants Danny Masterson “To Be Found Innocent” In Rape Retrial
By Jake Viswanath
'The Queen’s Gambit' Season 2 Tweet Wasn’t From Anya Taylor-Joy
By Mary Kate McGrath, Jack Irvin and Grace Wehniainen
'The Crown' Season 6 Has Suspended Filming "Out Of Respect" For The Queen's Death
By Bustle Staff
Get Even More From Bustle — Sign Up For The Newsletter
From hair trends to relationship advice, our daily newsletter has everything you need to sound like a person who’s on TikTok, even if you aren’t.