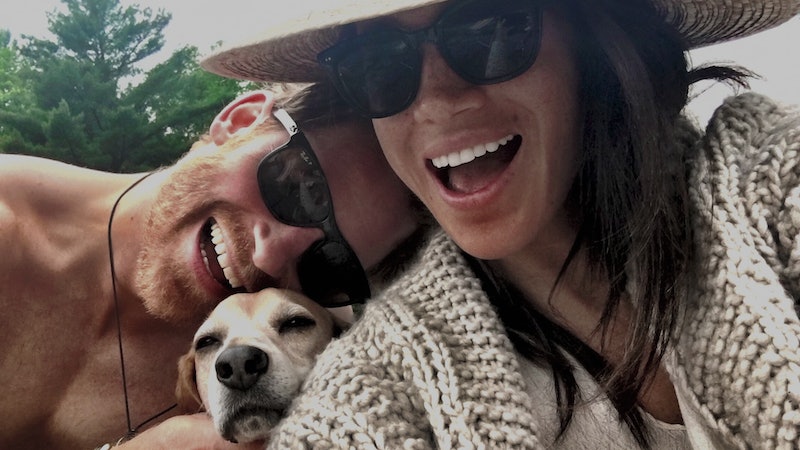 By 2022, it’s no surprise that social media plays an important role in many relationships — whether it’s a case of clever DM sliding or scoping out a potential blind date before meeting IRL. In Prince Harry and Meghan Markle’s new Netflix documentary, Harry & Meghan, the couple revisited the early days of their relationship and revealed that they connected through the power of Instagram. Specifically, a secret finsta account.

During Episode 1 of the documentary, which dropped Dec. 8, Harry explained that a mutual friend had posted a Snapchat video of Meghan, dog filter and all, that he was intrigued by. “I was like, who is that?” the Duke of Sussex explained. He then told that friend he was “dying to meet” Meghan — however, Meghan asked the mutual pal if she could see Harry’s feed first, seemingly acknowledging that Harry kept a private profile.

“That, to me, was the best barometer,” she said, of researching Harry via his finsta, as opposed to simply looking him up on Google. “Let me see what they’re about, in their feed, not what someone else says about them.”

She discovered wildlife photography and other photos from his travels which, apparently, did the trick. The pair got each other’s phone numbers and connected in London soon after. Now, Harry and Meghan reveal a lot during the documentary, but the name of Harry’s finsta account is not among the deets. However, Vanity Fair reports that it might still exist. So, what is it called?

The 2020 biography Finding Freedom revealed that Meghan followed a private, faceless account called @SpikeyMau5 in 2016, per Vanity Fair. “With no face visible in the profile photo, just a mouse-shaped helmet, it would have meant nothing to most people. But it was in fact Harry’s private account,” authors Omid Scobie and Carolyn Durand assert.

The account, an apparent reference to the DJ deadmau5, is actually still up — and still private. According to Vanity Fair, its bio previously read, “Not Prince Harry.” However, today, it simply provides a warning: “If you send me a follow request or a DM you will be blocked.” It seems to have no posts, nor any followers, but it does follow three accounts.

Of course, this is six years after Meghan first vetted Harry’s feed! Perhaps the account’s inactive because Harry and Meghan started their own shared family finsta?

More like this
'The Crown' Season 6 Has Suspended Filming "Out Of Respect" For The Queen's Death
By Bustle Staff
A Royal Lie: Harry Reveals The Truth About Princess Diana’s Ring
By Marina Watts
Prince Harry Incorrectly Recites Christina Aguilera’s “Genie In A Bottle” Lyrics
By Jake Viswanath
Brittany Snow Files For Divorce From Tyler Stanaland After 'Selling The OC' Drama
By Grace Wehniainen and Radhika Menon
Get Even More From Bustle — Sign Up For The Newsletter
From hair trends to relationship advice, our daily newsletter has everything you need to sound like a person who’s on TikTok, even if you aren’t.