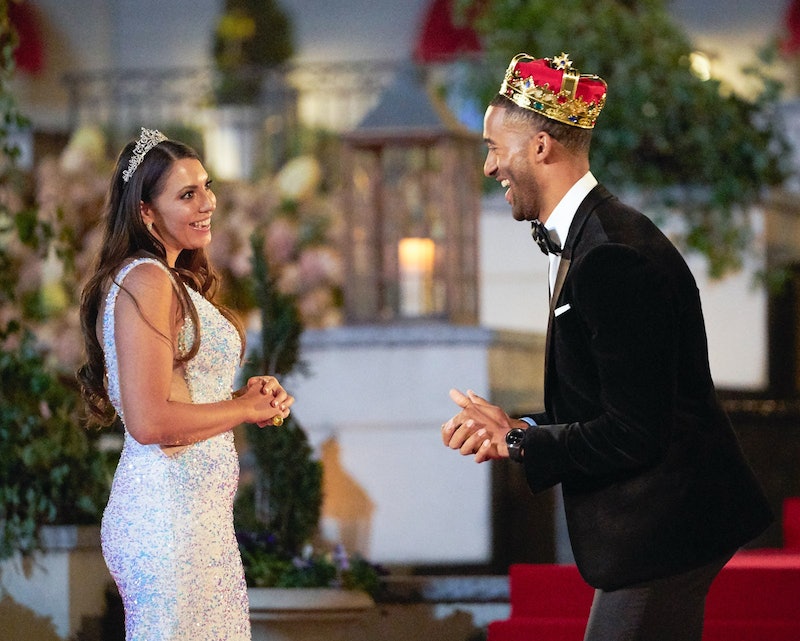 When 27-year-old Victoria Larson entered Matt James' season of The Bachelor on a throne, carried by men, and wearing a crown, the rest of the contestants — as well as Bachelor fans and even alum Demi Burnett — were put off, to say the least. Larson, whose job title is listed as "Queen" on the show, has already butted heads with a few contestants who've labeled her "mean" and a "drama queen." It seems Matt has yet to form a genuine, deep connection with her, but he does seem to enjoy her bold attitude. Still, the Bachelor could grow tired of Victoria's antics soon, bringing her royal spectacle to an end.

Since The Bachelor finished filming at Nemacolin Woodlands Resort back in November, "Queen" Victoria has been busy traveling during a pandemic and running her business. She also became embroiled in a supposed Trump scandal. Here's everything you need to know about what the most controversial contestant is currently up to:

She traveled to Florida

Even though leisure travel is currently not recommended by the CDC due to, oh yeah, the ongoing pandemic, Victoria hopped on a flight to Florida to celebrate Thanksgiving. "Moods when LA goes on lockdown again but then you remember you have a flight to Florida for thanksgiving #thankful," she captioned photos of herself smiling outside.

Aside from being a "Queen," Victoria also owns and operates Vikki Larson Beauty, which offers self-care and beauty products as well as pilates classes, health coaching, and an $800 21-day detox regimen. "Checking all of your dry brush orders with love," Larson wrote on Instagram alongside a photo of her posing with a laptop.

She went to Florida — again

Just after this season premiered on Jan. 4, Victoria flew to Florida yet again. This time, she went to celebrate her birthday, which is arguably non-essential travel. "Happy bday to me!!! The queen has arrived I love all my girls so much," she captioned a photo of herself and nine (unmasked, not socially distanced) friends on Instagram. "PSA we are all covid tested negative & very much aware of this tragic pandemic." Let's hope she doesn't pull a Kim Kardashian and fill a private island with her "closest inner circle" next.

She may have posted and deleted a selfie that featured a Trump flag.

On Jan. 11, Twitter user @imstaceygg posted a screenshot of an Instagram photo allegedly posted by Larson on Aug. 26, 2020. The image in question featured Larson and her dog and contained the caption: "One of us got glam and the other ran through a sprinkler. Happy international dog day to my best friend."

After looking closely at the picture, the user noticed what appeared to be a Donald Trump flag in the background. While only a small portion of the assumed flag is visible, fans thought it reminiscent of a popular Trump design due to the font, visible letters "R" and "U," blue hue, red line, and white star border. "What is dis hunny," wrote @imstaceygg with a screenshot of the Instagram post, which Larson has since deleted from her profile.

It's also possible that the potential flag spotted in Larson's photo is actually a "Trump Lost LOL" emblem designed to mimic the original.