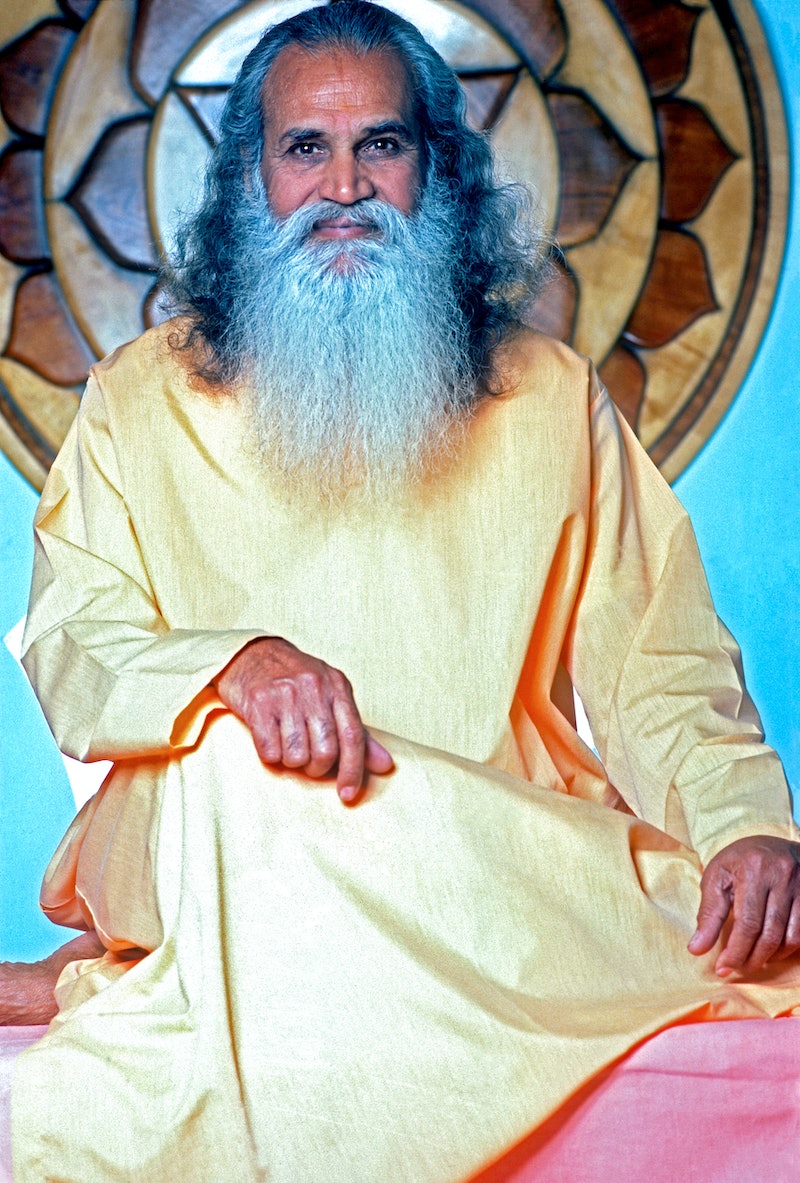 According to Netflix’s new docuseries Tiger King: The Doc Antle Story, private zoo owner Bhagavan “Doc” Antle sees himself as a kind of “guru.” The series alleges that Antle built a cult of personality around himself and abused and manipulated his employees, many of whom were women as young as 14. (Bustle has reached out to Antle for comment about the series but has not received a response.)

Several people interviewed in the show claim that Antle was heavily influenced by the teachings of Swami Satchidananda, an Indian spiritualist who rose to fame during the psychedelic craze in the 1960s and died in 2002. “If there’s somebody [Doc] idolized, it’s Swamiji,” Antle’s former employee and partner Barbara Fisher explains in Episode 1. “The way he talks about him, it’s beyond hero worship.”

As the docuseries explains, Antle was longtime friends with the swami (a term given to Hindu monks), who often liked to show off Antle’s animals at his yoga retreats; Satchidananda even gave Antle, who was born as Kevin Antle, the name of Bhagavan. This is a reflection of how the swami reshaped his own image; per The New York Times, Swami Satchidananda was born as Ramaswamy Gounder in 1914 in Chettipalayam, India. He worked as a welder at his family’s car business and eventually married and had two sons. When his wife died five years later, he threw himself into spiritual studies and went on a quest to find a yoga master. He eventually found the Hindu monk Swami Sivananda, founder of the religious Divine Life Society (DLS) organization who claimed in 2016 that he was 120 years old thanks to clean eating, yoga, and celibacy. Sivananda gave him the monastic name Swami Satchidananda, which means ''existence-knowledge-bliss absolute.''

Satchidananda toured India alongside Sivananda teaching yoga and spiritual practices, and eventually came to America in 1965. Realizing he had amassed a following in America, Satchidananda broke from Divine Life in 1966 to start his own organization, the Integral Yoga Institute in New York. Rumors spread that his yoga and meditation techniques could cure grave illnesses, and more disciples poured in. Soon he was giving lectures at Carnegie Hall and delivering the 1969 opening statements at the Woodstock music festival.

In 1972, Satchidananda founded two Yogaville centers (formally called Satchidananda Ashrams) in California and Connecticut to act as the headquarters for Integral Yoga. Years later, he acquired 750 acres of land in Virginia, and the Connecticut Yogaville relocated there. The new location featured a large central shrine and housed about 150 people, with plans to grow to 1,000 residents. It’s here that Antle attended retreats, put on his magic shows, and absorbed Satchidananda’s teachings. His tigers and his elephant, Bubbles, even led the opening 1986 ceremony of the Virginia location, per The Washington Post.

Tiger King: The Doc Antle Story explores how Antle used Satchidananda’s teachings while building out his zoo, Myrtle Beach Safari. The swami expected his followers to wear certain clothing and only eat certain foods. He preached obedience, selfless service, and living in poverty. Similarly, Antle expects all his employees to view the zoo not just as a workplace, but a lifestyle. According to a 2015 Rolling Stone profile on Antle, the female employees are all expected to be single, childless, and within 20 pounds of their “perfect athletic weight.” They must also abstain from drinking, smoking, and eating meat. In return, they live on site full-time and are given a small stipend.

As The Doc Antle Story with Antle, Satchidananda was eventually accused of sexual misconduct. In 1991, protesters waved placards that read “Stop the Abuse” and “End the Cover Up” outside a Virginia hotel where Satchidananda was making a keynote address. “How can you call yourself a spiritual instructor, when you have molested me and other women?” a former follower shouted from the audience, per The New York Times. Satchidananda denied all claims of misconduct. He was never charged, and he died before allegations could be brought forth in court.

Tiger King: The Doc Antle Story draws a clear thread between the two men, suggesting that Satchidananda saw Yogaville as a space to lure in young, impressionable female followers. “Doc Antle got ideas from Swami Satchidananda,” Sachi Oba, a former Yogaville devotee, says in the show. “He was attracted to the power that he wielded over other people.”