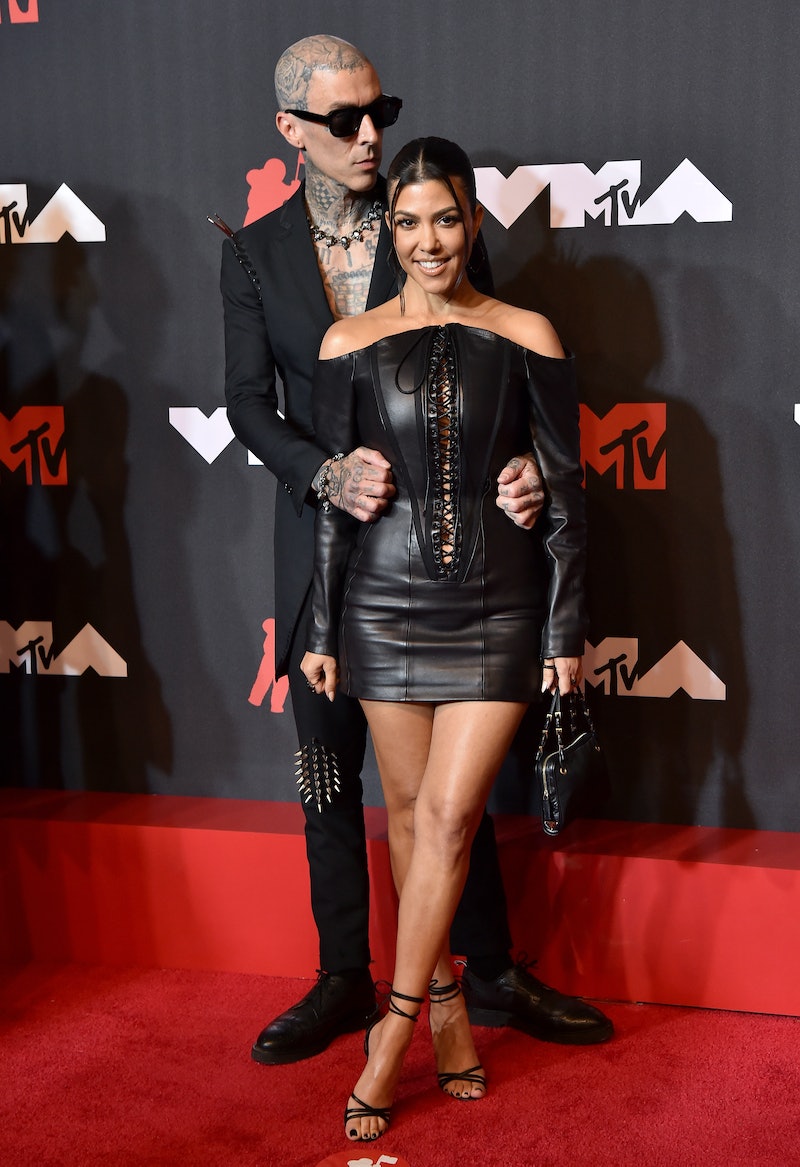 It hasn’t even been a month since Kourtney Kardashian accepted Travis Barker’s proposal, and already, fans want to know when the pair will tie the knot. Fortunately, after the engaged couple attended longtime pal Simon Huck’s wedding to Phil Riportella over the weekend, the Blink-182 drummer dropped a major hint about when he and the reality star will exchange their vows on Instagram.

Barker’s hint at their marriage timeline came in the form of a comment on one of the Poosh founder’s posts. “Going to the chapel @simonhuck@piptherip 🥂,” Kourtney wrote alongside a carousel of photos of her and Barker dressed to the nines at Huck and Riportella’s wedding. “Our turn next,” the drummer commented next to a red rose emoji, hinting that it won’t be long until they say “I do.”

This development should come as no surprise to fans who’ve been following Kourtney and Travis’ whirlwind romance ever since they confirmed they were dating in February. After several months of filling our social media feeds with PDA photos from their various vacations, the rocker reportedly popped the question at the Rosewood Miramar Hotel in Montecito, California, surrounded by a heart made of red and white roses. Kardashian revealed the engagement with a photo of the occasion, accompanied by the caption “forever @travisbarker.”

At the time, a source told E! that Kourtney had no idea about the engagement and was completely shocked when the musician presented her with the engagement ring, which is reportedly worth at least $1 million. “I could see Kourtney smiling from ear to ear and put her hand over her mouth looking surprised,” the insider said. “The family cheered for them and went back into the hotel.” They were joined by their families, including all of Kourtney’s sisters as well as her mom Kris, Corey Gamble, and Tristan Thompson. Barker’s children were also present.

After nearly a month of being engaged, it’s clear that the fiancés are still obsessed with each other. Not only did video surface of Kardashian dancing on Barker’s lap at Huck and Riportella’s wedding over the weekend, but Kourtney also shared a romantic post on Instagram in honor of her man’s 46th birthday. “I f*cking love you more than anything,” she wrote on Nov. 15. “My favorite everything. Happy birthday to you my baby!” Barker responded, “You’re a dream come true, my soul mate my everything I LOVE YOU.”

More like this
Travis Barker's New Tattoo Is Causing Some Awkward Confusion Among Fans
By Stephanie Topacio Long
Kourtney Kardashian's Daughter Penelope Rates Mason’s Sneakers On TikTok
By Alyssa Lapid
Kim Kardashian Gives “Bucket List Dream” Lecture At Harvard
By Alyssa Lapid
North West Will Make Her Acting Debut Alongside Mom Kim Kardashian
By Radhika Menon
Get Even More From Bustle — Sign Up For The Newsletter
From hair trends to relationship advice, our daily newsletter has everything you need to sound like a person who’s on TikTok, even if you aren’t.