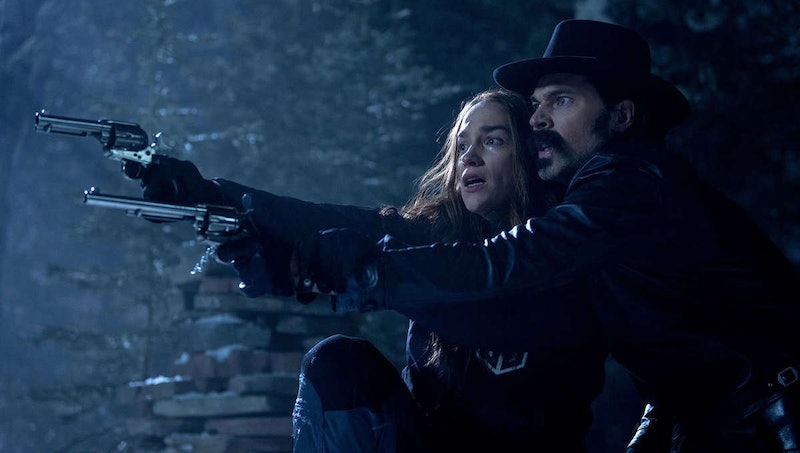 Wynnona Earp fans have been waiting years for Season 4 to make it to screen, and now they're going to have to wait just a little bit longer. The show airs its summer finale on Sunday, Aug. 30, and though it's not yet clear when Wynnona Earp Season 4 will be back, the wait should feel a lot more manageable compared to the lengthy gap between Seasons 3 and 4.

It was at Comic-Con 2018 that Syfy first announced Wynnona Earp's Season 4 renewal, with just one episode of Season 3 having aired at the time. The series was riding high and seemed primed to have a long, successful run on the network. But then something weird happened. The fourth season just... didn't get made. On Feb 21, 2019, series star Melanie Scrofano revealed on Twitter that the season's production had been delayed indefinitely — and no one seemed to know why. An answer came shortly afterward: Deadline reported the next day that IDW Entertainment, which financed and produced the show, had essentially run out of money, making it seem as if Season 4 just wasn't going to happen.

But fans of the series, known as "Earpers," didn't go down without a fight. They launched a huge campaign to save the show, going as far as purchasing a billboard in Times Square. And it worked. Cineflix Studios came in as a new co-producer in July 2019, offering IDW a much-needed cash injection so they could finally get Season 4 made. The fourth season began filming in January 2020 and everything was going well until the coronavirus pandemic struck. By March, production had shut down due to restrictions aimed at curbing the spread of the virus.

But Wynonna Earp is a show that refuses to die. The remainder of Season 4 began filming in Canada in July, making the show one of the first to restart filming during the pandemic, according to USA Today. "You can't kill this show with fire," series creator Emily Andras told the publication. "We’ve just been through so many trials and tribulations to try to get Season 4 done, what's a little pandemic? Honestly."

Syfy has yet to announce a concrete return date, but so long as production doesn't run into any more delays, it shouldn't be long before Wynonna Earp is back onscreen.