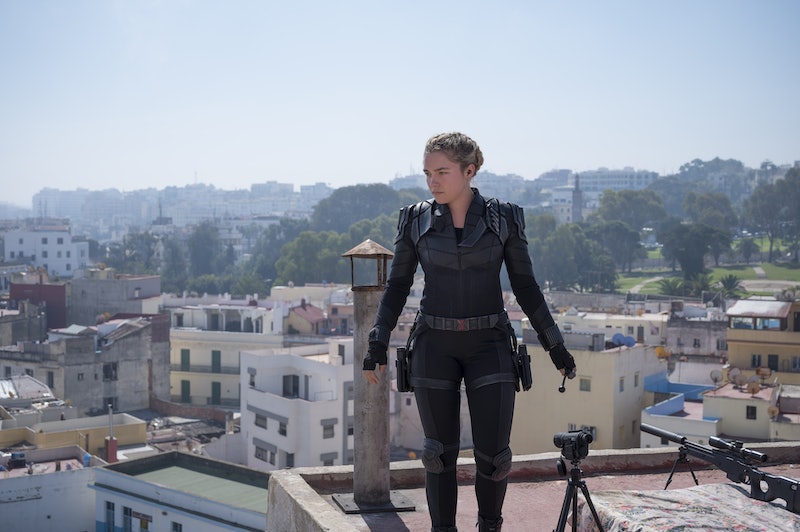 Spoilers ahead for Hawkeye Episode 3. So, where is Yelena on Hawkeye? The new Black Widow’s involvement in the show has been highly anticipated since her debut in the Marvel Cinematic Universe this July. But halfway through the series, she’s still MIA. Luckily, Florence Pugh’s co-stars have displayed varying levels of helpfulness in teasing her involvement.

For starters, Clint himself. If there’s one thing Jeremy Renner’s not going to do, it’s pull a Tom Holland spoiler-wise — that is, as far as he’s concerned, Yelena is just a character who “sounds familiar” from some movie he watched with his niece. “She’s like, ‘Ooh, Uncle Jeremy, what did you do?’ I said, ‘I didn’t do anything darling,’” he told Jimmy Fallon this November, referencing the Black Widow post-credits scene that ID’d Clint Barton as Yelena’s next target.

Just like Clint and Kate, though, Renner and Hailee Steinfeld have very different approaches to life, including how to handle potential spoilers. A week before Renner’s Jimmy Fallon interview, Steinfeld happily gushed about Pugh, telling Cosmopolitan the women instantly clicked instantly and “[had] a wonderful time” filming.

“We had a moment together where we were shooting and something went wrong,” she said. “There was no recovering from it. I started laughing so hard that somebody thought I was crying ... Mind you, we were in a scene that was in no way, shape, or form meant to be at all funny.”

Plus, Hawkeye head writer Jonathan Igla (who’s an archer himself) told Variety that Yelena’s involvement in the series was planned from the start. In fact, the Black Widow post-credits scene was engineered specifically for Hawkeye, he explained. “That scene came from Marvel, but it came in response to [us] begging for and making a good case for why Yelena had a place in our story.” Pugh herself hasn’t commented much on the show but did praise Jenner and Steinfeld in an Instagram post this July. “I now want a bow and arrow,” she wrote. “Muchos love to @haileesteinfeld and @jeremyrenner, can’t wait to see you there.”

So, it’s clear that Yelena will show up on Hawkeye. As for when, well, that remains a mystery. From a story perspective, the show’s kept Clint and Kate busy with plenty of enemies — the Tracksuit Mafia, Echo, sword-obsessed Jack Duquesne (the pair’s most pressing threat after that Episode 3 cliffhanger). However, Clint’s also been grappling with Natasha’s memory throughout the show, like at Rogers: The Musical, so it would make sense to introduce a physical embodiment of that grief via a (likely) vengeful Yelena. The last time we saw her, the new Black Widow’s apparent handler, Valentina, was encouraging her “to take a shot at the man responsible for [her] sister’s death.” And while viewers know Clint didn’t murder Nat, Yelena might not have the whole scoop.

Fortunately, Steinfeld’s anecdote seems to suggest they were filming something pretty serious — i.e., not the stuff of a brief, blink-and-you-miss-it cameo. Here’s hoping she and Clint can provide each other with some much-needed closure.

In the meantime, there are even bigger questions at hand — like, as Twitter user SPDRVRS wonders, when will MCU pets Lucky and Fanny meet?!