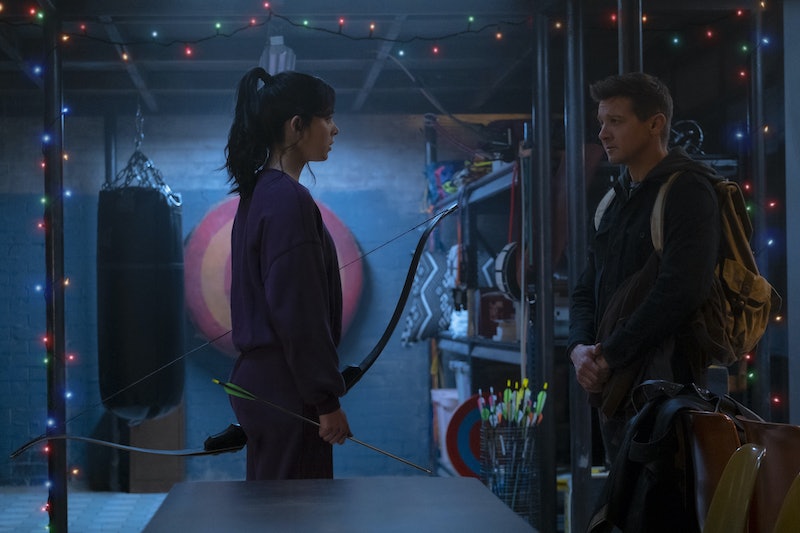 Spoilers ahead for Hawkeye. Phase 4 of the Marvel Cinematic Universe has already delivered a delightfully wide variety of stories in 2021 alone — from Emmy-nominated emotional crises to undead Avengers, Multiversal mayhem, and brand-new heroes to love (hi, Shang-Chi and Cap!). Now, a Die Hard-esque Christmas adventure has entered the chat with Hawkeye, and the new series already promises major holiday comfort viewing vibes. Plus, it’s finally a chance for viewers to reacquaint themselves with the day-one Avenger, who’s had somewhat sparse screen time over his decade in the MCU. Seriously, a 2019 post-Endgame Reuters analysis found that Clint Barton clocked only 52 minutes of coverage in his long tenure with the team.

As early as the first trailer for Hawkeye, the show’s been expanding what we know (or thought we knew) about the archer — like his comics backstory as a hard-of-hearing character, his partnership with Kate Bishop, and his furry friend Lucky, aka Pizza Dog. And yes, there are plenty of nods to the comics and other MCU movies to theorize about. Here are all of the Marvel Easter eggs in Hawkeye so far, from the trailer to the new episodes now streaming.

This post will be updated as new episodes of Hawkeye premiere on Disney+ every Wednesday.

Don’t have Disney+ yet? Sign up to stream everything Marvel.

More like this
The 'Andor' Timeline, Explained
By Gretchen Smail
Nicola Coughlan Shared A Lady Whistledown Excerpt From ‘Bridgerton’ Season 3
By Grace Wehniainen, Alyssa Lapid and Sam Ramsden
Everything You Need To Know About ‘Black Panther: Wakanda Forever’
By Bustle Editors
The 50 Most Powerful Characters In The Marvel Universe, Ranked
By Johnny Brayson and Nola Pfau
Get Even More From Bustle — Sign Up For The Newsletter

This article was originally published on Sep. 14, 2021