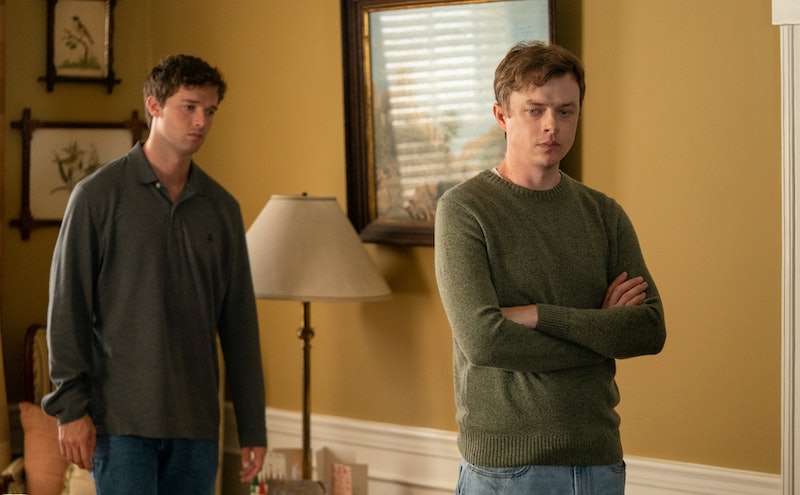 HBO Max’s The Staircase dramatizes the tragic 2001 death of Kathleen Peterson, who was found lying in a pool of blood at the bottom of her staircase in her Durham, North Carolina, home by her husband, novelist Michael Peterson. He was immediately accused of murder and put on trial, and the series explores how, with the exception of one stepdaughter, Peterson’s children all maintained that their father was innocent. This was especially true for his sons from a prior marriage, Clayton (Dane DeHaan) and Todd (Patrick Schwarzenegger).

Peterson claimed that Kathleen fell after mixing alcohol with Valium, while authorities alleged he beat her to death, per NBC News. Peterson’s theory was backed up by Todd, according to Written in Blood: A True Story of Murder and A Deadly 16-Year Old Secret That Tore a Family Apart author Diane Fanning. However, Peterson was convicted of first-degree murder in October 2003, after numerous theories about owls and blood spatter were explored. Then in a twist, his conviction was vacated in 2011 after a judge found that the blood splatter analyst gave misleading testimony at his trial and in numerous other cases.

One particular sticking point for Peterson’s defense team was the sloppy work of the investigators; as noted during the trial, police allowed Todd to walk into the crime scene moments after the paramedics arrived just because he asked if he could grab a soda. “The police say ‘Sure.’ And here goes Todd, walking around the kitchen with blood on his hands,” Peterson’s attorney David Rudolf said during the trial, per NBC News. He later added that “the truth of the matter is that [the crime scene] was not preserved at all for about an hour,” throwing any evidence against Peterson into question.

So a judge granted Peterson the opportunity for a new trial. He accepted an Alford Plea deal for voluntary manslaughter, meaning he did not admit to the crime but acknowledged that the prosecution’s evidence would likely lead a judge or jury to convict him. He was released from prison in February 2017. Peterson later told told WRAL-TV that he “didn’t see [his release] as victory at all,” but one of his sons had advised him to take the plea deal. “You’ll never win,” he said his son told him. “Pick up your chips and go home.”

Leading up to Peterson’s release, Clay told reporters that he “certainly would like an outcome where justice would be served,” and affirmed that he and his siblings believed Peterson was innocent, per The News & Observer. They repeated this stance in The Staircase, a 2004 documentary directed by French filmmaker Jean-Xavier de Lestrade that was added to Netflix in 2018 with new footage.

Clay had his own trouble with the law in the early 1990s. Years before Kathleen’s death, he was sentenced to four years in federal prison for attempting to bomb Duke University in 1994, while he was a freshman there. Clay claimed he cut the bomb’s fuse so it wouldn’t actually explode, per Greensboro.com. He has two children and lives in Baltimore, Maryland, as he told The News & Observer in 2016.

His brother Todd lives in Tennessee, according to another article by the Raleigh-based newspaper. Not much is known about his personal life, but he often uses his Instagram to share his “face lift updates,” conspiracy theories, and conservative views. In his bio, he writes that he’s the “president and founder of America Industries,” which seems to be a website focused on buying up various website domains in order to control the “internet’s infrastructure,” per the site’s description. For example, he claims that under one domain, he’ll create “the world’s leading online university” where “tuition will be capped at $10 a month for citizens from most countries of the world.” For another domain, he claims that he was building a worldwide “Jesus Network” that “will have a presence in over 100 countries.” And on a May 5 Instagram post, he ranted about the Black Lives Matter movement and the “evil Democrats.”

The Peterson family appears to have remained close, aside from Kathleen’s daughter Caitlin Atwater, who had a different view on Peterson’s role in her mother’s death.