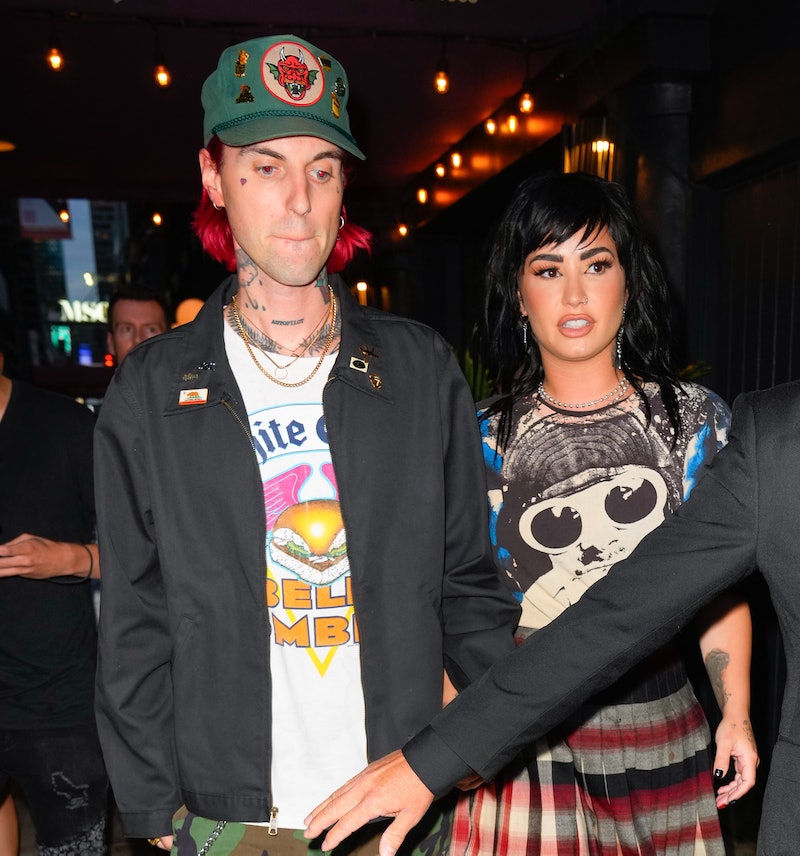 Demi Lovato’s new album, HOLY FVCK, will include some reflective moments about her past relationships — with fans speculating that “29” is about the age gap between Lovato and ex Wilmer Valderrama — but now she seems to be looking ahead toward someone new. Two days before the Aug. 19 release of HOLY FVCK, Lovato and and fellow musician Jutes (sometimes stylized as Jute$) were photographed on a night out in New York City together. Jutes (aka Jordan Lutes) recently collaborated with Lovato on HOLY FVCK single “Substance.”

On Aug. 17, People reported Lovato and Jute$ are a couple, just a week after a source told the magazine that Lovato was in a “happy and healthy relationship” with a then-unnamed musician. Lovato and Jutes also seemed to confirm their coupling on Instagram after Jutes posted a video of Lovato performing “Substance” on The Tonight Show, writing that she had the “best voice in the game, by a lot” and that she is “f*cking hot.” Lovato returned the praise in a comment. “YOU ARE 😍😍 thank you so much baby!! 🥰🥰,” she wrote, seemingly confirming their relationship.

In another Instagram post, Jutes thanked Lovato for the chance to collab on the song. The lyrics allude to Lovato’s journey with sobriety: “Am I the only one looking for substance? / Got high, it only left me lonely and loveless.”

“When i got asked to pull up and write for this session i remember thinking wtf am i supposed to do in a demi lovato session? only to show up and realize she was making one of the hardest rock projects i’ve ever heard,” Jutes wrote in the July 15 post.

If you haven’t heard Jutes’ music before, you may be wondering: Who is Lovato’s boyfriend, besides being her musical collaborator? For starters, he’s on his own sobriety journey. In July, he celebrated 100 days sober. “I’ve never felt better mentally and emotionally,” he wrote at the time.

“Alcohol was my last remaining vice i used to deal w my anxiety and mental sh*t,” he wrote in another post. “Took me a minute to get here but doing my best to face sh*t in a less harmful way these days.”

As far as music goes, Jutes isn’t just lending his songwriting talents to Lovato’s latest project — he has one coming out this summer. On Aug. 4, the musician dropped the single “Hollywood Hillbilly” off his new album, whose title he invited fans to guess.

On his creative process, Jutes takes a largely independent approach, making music and accompanying videos with his friends, he explained in one post. “I do as much as i can myself and the rest is just left to the universe bringing me good luck and rly special fans who support tf outta me.”

According to the musician’s Spotify, he already has one album out (2021’s Careful What You Wish For) as well as a slew of singles. Music blog Banger of the Day describes his style as “punk-rock with modern trap elements.”

More like this
What Demi Lovato Really Thinks About Child Stardom, Depression, & Sobriety
By Radhika Menon
Demi Lovato Might Stop Touring Forever Due To Being "So F*cking Sick"
By Jake Viswanath
Everything To Know About Taylor Swift’s 10th Studio Album, 'Midnights'
By Grace Wehniainen and Jake Viswanath
Twitter Is Freaking Out Over Rihanna’s 2023 Super Bowl Halftime Show Announcement
By Stephanie Topacio Long
Get Even More From Bustle — Sign Up For The Newsletter