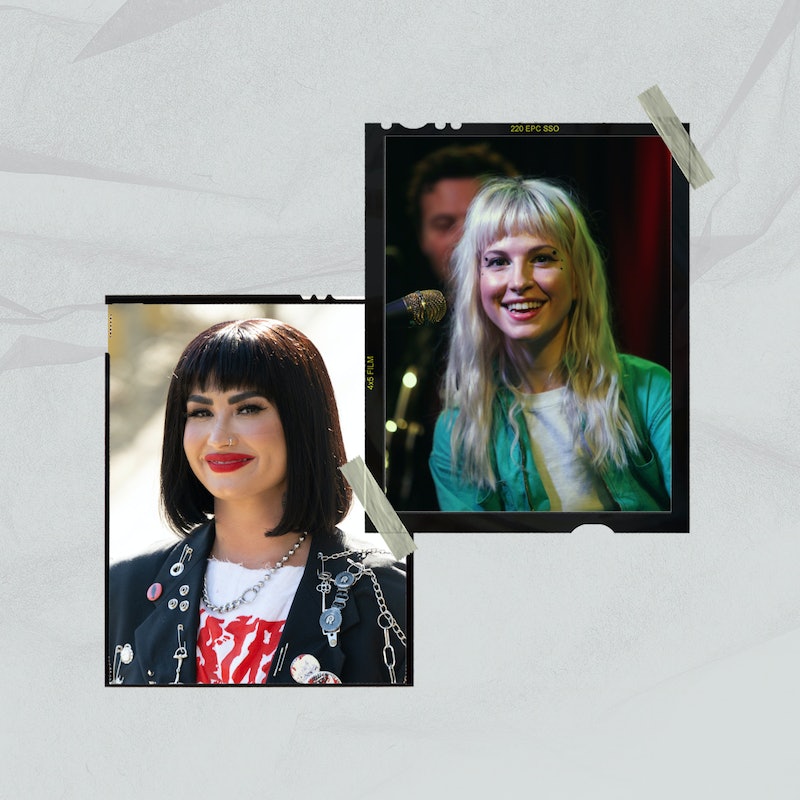 With her new album, Demi Lovato is getting back to the old days — to her debut Don’t Forget rock vibe, that is (bangs and all!). When asked by Rolling Stone if HOLY FVCK would be a return to Lovato’s “emo” side, she happily confirmed. “That, but better ... It’s a new era reminiscent of my first era,” she said.

In addition to revisiting her teenage years sonically, Lovato is also reflecting on the people who impacted her adolescence. There’s “29,” the new single that fans speculate is about Lovato’s ex, Wilmer Valderrama — “Finally 29 / Funny, just like you were at the time,” Lovato sings, seemingly referencing the age Valderrama was when they met (they started dating after Lovato turned 18, she revealed in Simply Complicated).

The Grammy-nominated musician is opening up about another person who was influential to her formative years, albeit for a very different reason, though. In an Aug. 17 interview with Apple Music, Lovato cited Paramore as musical inspiration at the time, and recalled meeting Hayley Williams at 15. Though the “29” singer said she didn’t “know [Williams] well enough” to receive personal support during her recovery, she felt that the Paramore co-founder was likely “pulling” for her to succeed.

As Apple Music’s Zane Lowe pointed out, Williams once turned down a collab with Lil Uzi Vert because she didn’t “want to be that famous” — and teaming up with a high-profile artist like Lovato definitely isn’t a casual thing, either, so it seems safe to say that a collaboration between the musicians may not happen anytime soon. But still, how amazing would that be?

In the meantime, Lovato seems to be happy working with another beloved rock musician: herself, that is. “When I started my first two albums, I feel like my instincts were on track, and I was doing the music that I loved listening to. And then I strayed away from it,” she said, explaining that she pivoted toward pop to crank out more “radio songs.”

“I would get on stage, and I'd be in these leotards and these stiletto shoes that I was miserable in,” she continued (let Lovato wear Converse with her dress, people!!). “And I danced. I did choreography and stuff like that, and I just wasn’t happy. And so I think that that led to me completely losing myself to find myself again, and I’ve started to find myself over time. And it’s funny that when you just go back to who you were in the beginning, as a 15 year old, my instincts were correct. And I just got to stick to those but harder.”

More like this
What Demi Lovato Really Thinks About Child Stardom, Depression, & Sobriety
By Radhika Menon
Everything To Know About Taylor Swift’s 10th Studio Album, 'Midnights'
By Grace Wehniainen and Jake Viswanath
Lizzo Twerks While Playing James Madison's 200-Year-Old Crystal Flute Onstage
By Radhika Menon
Twitter Is Freaking Out Over Rihanna’s 2023 Super Bowl Halftime Show Announcement
By Stephanie Topacio Long
Get Even More From Bustle — Sign Up For The Newsletter