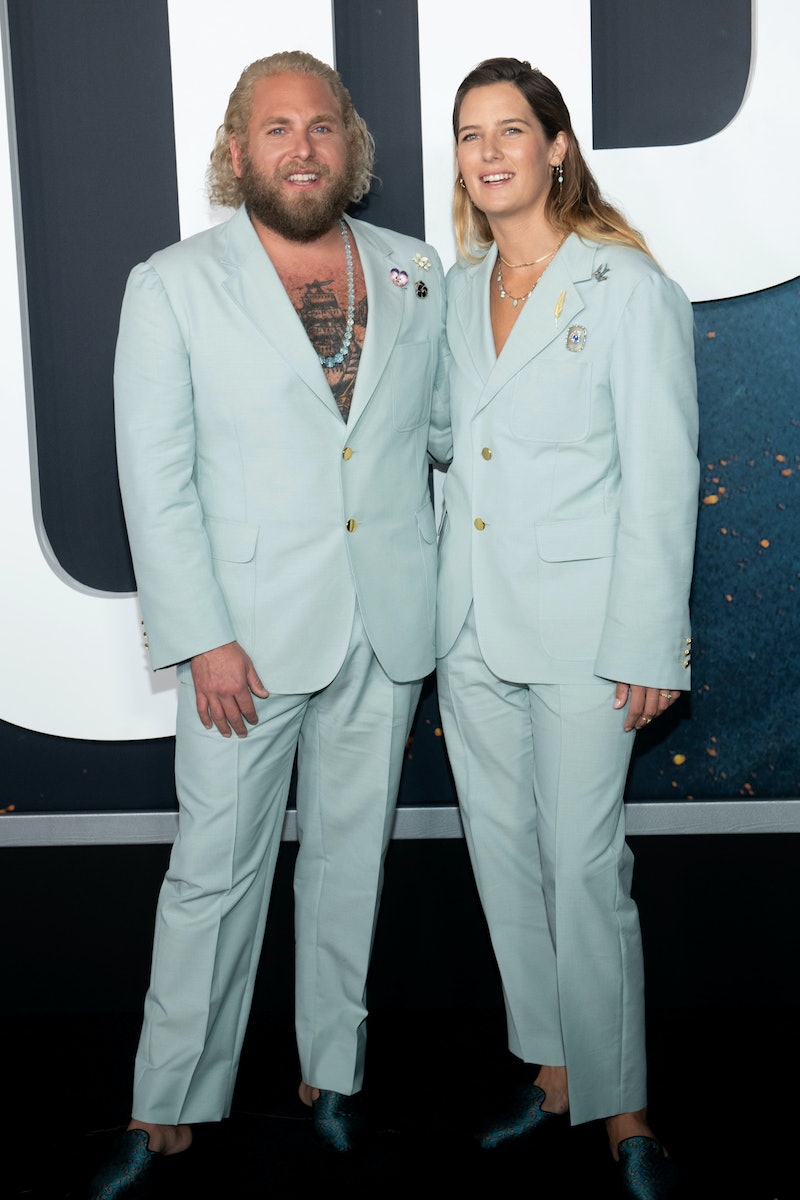 At the premiere of Jonah Hill’s Netflix movie Don’t Look Up in December, Hill and his girlfriend Sarah Brady walked the red carpet in matching Gucci suits. Despite the film featuring megastars like Jennifer Lawrence, Leonardo DiCaprio, Ariana Grande, Timothée Chalamet, Cate Blanchett, and Meryl Streep, Hill and Brady’s dual fashion moment was the real star of the event. The actor posted their baby blue get-ups on Instagram, writing a caption directed to Brady, “Thank you for being the most supportive and best human. I love you.”

While the couple had gone public on Instagram prior to the premiere, Hill and Brady’s red carpet statement made it clear just how serious they were. In fact, some fans went as far as to speculate they were engaged after Instagram gossip account Deuxmoi posted an anonymous tip hinting that an A-list star was going to propose to his girlfriend in Hawaii, which just so happened to be where Hill and Brady were recently on vacation this February.

On Feb. 16, Hill denied the rumors in an Instagram post in the most Jonah Hill way. “The rumors are not true,” he wrote, before landing the punchline. “I’m engaged. But not to my girlfriend, I am engaged to your mom. I know this is shocking but please respect our privacy at this time.” He even tagged the post’s location as “Your Mom’s House” for emphasis. In his caption, he sent a very clear message to the press: “Media stop writing fake stuff it’s corny.”

After their red carpet debut, fans began to wonder who Brady is. In her Instagram bio, Brady describes herself as a “surfer” and “future lawyer.” According to Brady’s website, the 25-year-old student graduated from U.C. San Diego in 2021 with a bachelor’s degree in anthropology of climate change and human solutions. She plans to start law school in the fall of 2022 with the goal of pursuing a career in environmental policy. Brady is also interested in photography and activism. She has worked as an ambassador for the Changing Tides Foundation and environmental research associate and community organizer for Committee to Bridge the Gap.

It’s hard to pinpoint the exact date Hill and Brady started dating, but the couple became Instagram official on Sept. 9, when the Oscar-nominated actor posted a selfie from a dinner date with his new flame. “grateful for you @sarahhbrady,” he wrote, with some lovey-dovey emojis added in for good measure. Prior to Brady, Hill split from former fiancée Gianna Santos in October 2020, just over a year after getting engaged. He kept his romance with Santos very private, rarely being photographed in public, but with Brady, things appear to be different so far.

Since going public, the pair have not been shy about their love on social media. Brady often posts candid selfies of them, sometimes with a picturesque ocean view. “I am so grateful for you every day,” she wrote to Hill in a Thanksgiving Instagram post. “Thank you for making me laugh so hard I snort... Thank you for your kindness, patience, and support. Thank you for challenging me to be the best version myself. Thank you for being my partner & teammate, and for your loving devotion to growing and evolving together.”

Hill has returned the favor, albeit in more humorous ways, like posting their matching Despicable Me-inspired Halloween costumes (there seems to be a trend here).

The Don’t Look Up premiere marked the couple’s red carpet debut, and Brady was just as excited to be by his side as she was for their matching outfits.

“Congrats jojo!!” she wrote on Instagram, posting photos from the red carpet. “Not surprised you’ve helped create another amazing film for the world. I love you SO MUCH and was honored to be your date.” She also gave a shoutout to their stylist Ezra Woods for putting their headline-making looks together. “HUGE thank you to @ezrawoodsofficial for styling us so beautifully,” she said “I felt like a queen last night.”