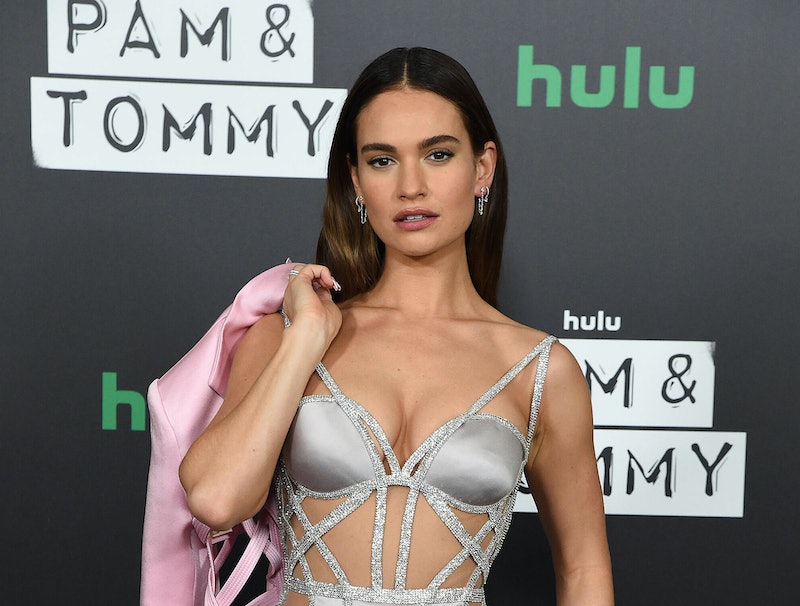 Lily James is about to tell the story of one of the world’s most notorious celebrity love stories on Hulu’s series Pam & Tommy, in which she stars as Pamela Anderson, opposite Sebastian Stan as Mötley Crüe drummer Tommy Lee. While her relationship history may not be as chaotic as the Baywatch star she’s portraying, James’ dating life is of major interest now more than ever. James is pretty private about the details of her love life, never indulging the masses with confirmations of her relationships. Still, the Mamma Mia: Here We Go Again star has been linked to everyone from a Marvel superhero to a faux member of the British royal family.

As of January 2022, James has seemingly been dating Queens of The Stone Age bassist Michael Shuman for the past year. The pair were first linked in February 2021 when the Daily Mail spotted her kissing the musician in Suffolk, England. In the subsequent months, they were seen looking couple-y in Los Angeles on several occasions, with their most recent outing being at the UNICEF Blue Moon Gala in London on Dec. 9.

As per usual with James, neither she nor Shuman have yet to confirm their relationship in any official capacity, but fans think James may have just gone Instagram-official with Shuman in a very subtle way. On Feb. 19, she posted a slideshow of photos from what seems to be a recent trip, one of which shows the back of a man’s head whose hair just happens to look like Shuman. “Postcards from the edge,” she captioned her Instagram post. However, James did not tag her rumored boyfriend in the post, keeping her relationship status as mysterious as ever.

Before dating Shuman, James was linked to actors on both the big and small screen. In October 2020, James was seen getting cozy with Dominic West in Rome, but West, a married man, attempted to squash the dating rumors when he and his landscape designer wife Catherine FitzGerald posed for photos outside of their home, holding up a sheet of paper that read, “Our marriage is strong and we’re very much still together. Thank you.” In May 2021, James declined to give her side of the story to The Guardian:. “Ach, I’m not really willing to talk about that,” she said. “There is a lot to say, but not now, I’m afraid.”

Prior to the situation with West, James had been linked to The Crown actor Matt Smith. James and Smith met in 2014 while filming Pride and Prejudice and Zombies, and romance rumors emerged after the two were spotted at the Cannes Film Festival together that same year. The duo then made a number of red carpet appearances together, such as the 2015 red carpet premiere of James’ film Cinderella.

In 2018, James offered rare insights into her relationship with Smith in an interview with Marie Claire UK, opening up about some of the challenges the two face with their nonstop work schedules. “You have to trust that things won’t go away if you stop for a bit. I haven’t really stopped, and I don’t think that’s a feasible way to work,” James said. “For me, eventually, that’s not the lifestyle I want.” She added, “That’s not only with regards to my relationship with Matt, but with my friends and family. There’s so much you miss. That’s why I know I can’t keep working at this intensity. I finish a job; Matt starts one.” The two were presumed to be engaged after James was spotted with a ring on that finger, but by December 2019, breakup rumors began to spread. They were spotted together in March of 2020, briefly fueling speculation of a reunion.

Fast forward to July 2020, though, and James sparked romance rumors again — this time with Captain America actor Chris Evans after the two were spotted out together in London. In an interview with Harper’s Bazaar in September, James wouldn’t confirm nor deny her relationship with Evans, but offered some sage advice that she would give her younger self: “Don’t be obsessed by boys! Hang out with your girl mates,” she said. “And don’t take everything so seriously — be kind to yourself."

More like this
Tanya Burr Is Expecting A Baby With Her Mystery Partner
By Maxine Harrison
Britney Spears Just Recreated One Of Her Iconic Record Covers
By Frances Stewart
James Nesbitt Won’t Join 'Strictly' For A Very Relatable Reason
By Sophie McEvoy
At 28, Emma Thompson Was Already A Star — But Unhappy In Love, Actually
By Olivia-Anne Cleary
Get Even More From Bustle — Sign Up For The Newsletter