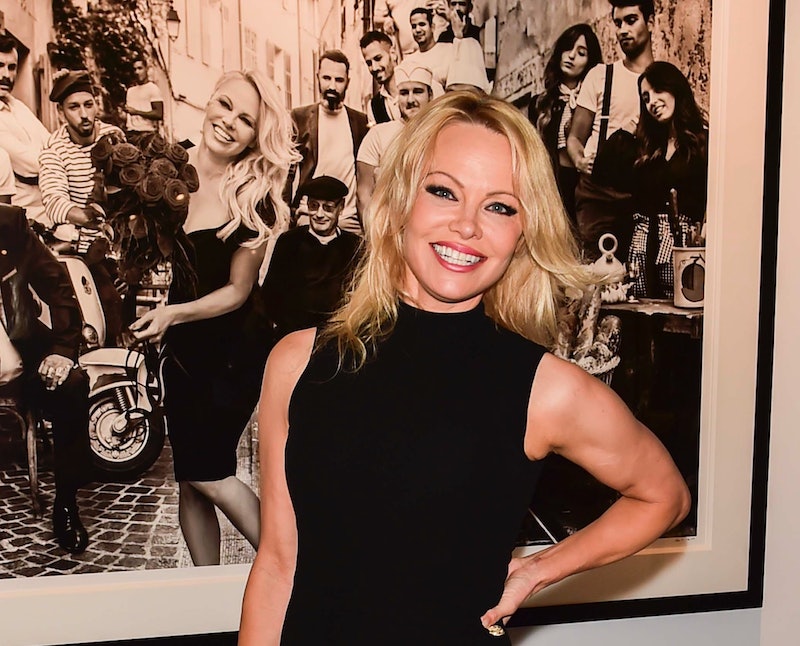 No other celebrity’s dating history compares to the love life of Pamela Anderson. The Baywatch star’s first marriage to Mötley Crüe drummer Tommy Lee was so chaotic and riveting that their love story is being told all over again on Hulu’s new show Pam and Tommy. The limited series, which premieres on Feb. 2, follows Anderson (Lily James) and Lee (Sebastian Stan) as they fall in love, get married on a whim, and become the victims of robbery when a stolen intimate video gets sold for profit, launching a saga that kick-started a whole industry for celebrity sextapes. Their relationship provided enough tales for a lifetime, but for Anderson, it was just the beginning.

Now, Anderson has been married six times and counting, from her infamous first husband in the ’90s to her current husband Dan Hayhurst, who she wed on Christmas Eve in 2020 but just filed for divorce on Jan. 20, 2022. In between, Anderson has been engaged a couple times and tied the knot with controversial figures like Kid Rock and the man from Paris Hilton’s sextape — twice. Some may shame her dating history, but it’s truly a testament to how Anderson won’t stay in a situation that doesn’t suit her. She continues to believe in love no matter what. “Love is the most important thing in the world,” she told W Magazine in 2017. “Everything else is meaningless, really.”

Anderson’s first and most famous marriage began when she met Lee on New Year’s Eve in 1994. A few weeks later, the duo went on a first date: a trip to Cancun. Four days into their romantic getaway, they got married, trading in wedding rings for tattoos of each other’s names on their ring finger. After returning from Mexico, Anderson moved into Lee’s home, where a fired electrician stole a private tape of the newlyweds and sold it for profit.

The stress of the stolen recording put an immediate strain on their marriage, but they soldiered on, even welcoming two sons together. The couple welcomed Brandon Thomas Lee, a future The Hills: New Beginnings star, in 1996, and Dylan Jagger Lee, who was born 18 months later. However, after an alleged physical altercation at their home that resulted in Lee’s arrest, Anderson filed for divorce in 1998.

Two years after her public split from Lee, Anderson fell in love with Swedish model Schenkenberg after he reportedly rescued a bird from a toilet in Monaco (Anderson is a noted animal activist). The two dated for more than a year before calling it quits. They ended their relationship on friendly terms.

Anderson started dating Kid Rock in April 2001 after breaking things off with Schenkenberg. A year later, the controversial singer proposed to Anderson in a desert outside of Las Vegas, which feels fitting for the rocker. However, after another year of dating, the couple broke off their engagement. “The word that best describes me now is ‘free’,” she told PEOPLE at the time. “That’s all I will say. I’m a mom, and that’s where my life is at.”

Three years after going their separate ways, Anderson reunited with Kid Rock in 2006 and went through with the wedding this time. The couple got married on a yacht in Saint-Tropez, France, in July 2006, amid rumors that their nuptials were fueled by Anderson getting pregnant with their child. That November, Anderson announced that she suffered a miscarriage (which Kid Rock claims she lied about), and she filed for divorce from him just days later. However, other reports said that Kid Rock flipped out about Anderson’s appearance in the film Borat after a screening at Universal Studios executive Ron Meyer’s house, which eventually led to their divorce.

In 2019, Borat star Sacha Baren Cohen corroborated reports that Anderson’s portrayal in the film caused the divorce. In an interview with USA Today, Cohen recalled texting his co-star to what Kid Rock thought of the film. Anderson texted back, “He’s getting divorced,” citing “the movie” as the reason. “And I thought it was a joke, but then a few weeks later they got divorced and they put as a reason for divorce, ‘Borat’,” Cohen said.

A year after divorcing Kid Rock, Anderson applied for a marriage license with Rick Salomon, better known as the man from Paris Hilton’s sextape. In October 2007, Anderson followed through and married Salomon, who PEOPLE described as her “longtime pal.” The ceremony took place at the Mirage Hotel in between two of Anderson’s magic shows at Planet Hollywood during an hour-and-a-half break. Her magician partner Hans Klok attended the wedding, as did Spider-Man actor Tobey Maguire. However, just two months after the wedding, Anderson and Salomon separated. In February 2008, Anderson had to go as far as to request an annulment for the marriage, citing fraud, which was granted by the next month.

In 2008, Lee told Rolling Stone that he and Anderson were giving their relationship another try — or as the rocker called it, their “801st try” — more than a decade after they divorced in an attempt to reunite their family. “Pamela and the kids have moved in with me,” he said at the time. “It’s awesome, man. It’s definitely working. You can tell on the kids’ faces — they’re happy when we’re together.” However, their reunion was short-lived, as the duo called it quits for good romantically in 2010.

In October 2013, Anderson revealed during an interview on The Ellen DeGeneres Show that she had remained “friends with benefits” with Salomon since their annulment, but it grew into something bigger. In January 2014, she announced that she had secretly re-married Salomon, showing off her wedding ring on the red carpet of Sean Penn’s Help Haiti Gala. “We're very happy,” she told E! News. “Our families are very happy and that's all that matters.”

Just six months later, déjà vu struck when Anderson filed for divorce from the film producer in July 2014. However, she asked the judge to dismiss her request the next month, saying they had reconciled their differences. Finally, she filed again and divorced him for good in February 2015.

In 2017, Anderson started dating French soccer player Adil Rami. The pair were together for nearly two years before ending their relationship in June 2019 in an ugly split, with Anderson accusing Rami of cheating in an Instagram post. “The last (more than) 2 years of my life have been a big lie,” she wrote. “I’m devastated to find out in the last few days. That he was living a double life. He used to joke about other players who had girlfriends down the street in apartments close to their wives. He called those men monsters ... He lied to all. How is it possible to control 2 women’s hearts and minds like this ... He is the monster.”

Rami denied the allegations in his own Instagram post, saying he “deeply respects” Anderson, who responded to his denial with a lengthy blog post that included more alleged proof of his infidelity, some of which involved Rami’s ex Sidonie Biémont. Anderson called his statement a “carefully worded response ... written either by his sister, lawyer or team at futball club for damage control.”

The honor of Anderson’s quickest marriage goes to her fourth husband Jon Peters, who she married in January 2020 after dating him briefly 30 years prior in 1989. “There are beautiful girls everywhere, I could have my pick, but — for 35 years — I’ve only wanted Pamela,” Peters told The Hollywood Reporter after their intimate Malibu ceremony. “She makes me wild — in a good way. She inspires me. I protect her and treat her the way she deserves to be treated.”

However, the couple broke off their relationship just 12 days after tying the knot, deciding not to finalize their marriage license. “I have been moved by the warm reception to Jon and my union,” Anderson said in a statement to THR. “We would be very grateful for your support as we take some time apart to reevaluate what we want from life and from one another. Life is a journey and love is a process. With that universal truth in mind, we have mutually decided to put off the formalization of our marriage certificate and put our faith in the process. Thank you for respecting our privacy.”

Anderson caught fans by surprise in January 2021 by announcing that she married her bodyguard Dan Hayhurst in an intimate Christmas Eve ceremony. “'I’m exactly where I need to be — in the arms of a man who truly loves me,” she told DailyMailTV. The couple tied the knot at Anderson’s Vancouver Island home, where her own parents also wed. “I was married on the property I bought from my grandparents 25 years ago, this is where my parents were married and they are still together,” she said. “I feel like I've come full circle.”

Anderson filed for divorce from Hayhurst on Jan. 20 after a year of marriage, with a source telling Rolling Stone that their relationship was a “pandemic whirlwind” that petered out. “Pamela loves as authentically as she lives,” the source said.