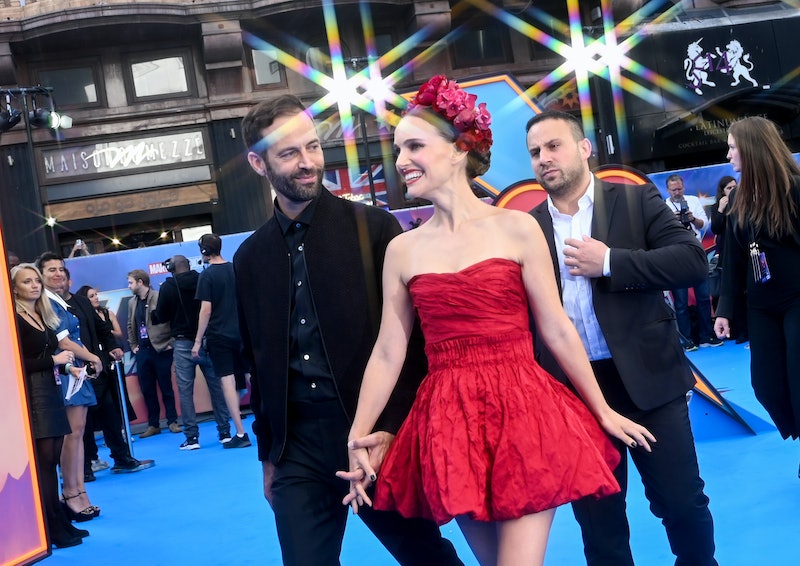 Thor may be an intergalactic heartthrob who wields the mighty Mjolnir but everyone in the Marvel Cinematic Universe knows that the Asgardian god only has eyes for Jane Foster. Though they’d broken up several films ago, aka pre-Thanos, Thor never quite moved on from the astrophysicist, which makes for some awkward run-ins in Thor: Love and Thunder, in which the exes work together. While the fate of Chris Hemsworth and Natalie Portman’s characters’ onscreen relationship is up in the air, Portman’s romantic department in real life is as stable as ever. She’s been married for 10 years to ballet dancer and choreographer Benjamin Millepied.

The two met in 2009 on the set of Portman’s Oscar-winning turn in the psychological thriller Black Swan. They began dating shortly after. A year later in 2010, the couple announced that they were engaged and expecting. In her Oscars’ acceptance speech for Best Actress, Portman, who was pregnant at the time, made a sweet shoutout to her then-fiancé. “To my beautiful love, Benjamin Millepied, who choreographed the film and has now given me my most important role of my life,” she said. Portman and Millepied welcomed their first child, Aleph, in June 2011, and tied the knot in August 2012 in a secret wedding in Big Sur, California.

The super-private Portman rarely talks about her relationships, but she did tell InStyle in February 2011 all about what she looked for in a perfect match, when she was already dating Millepied. “I look for all the same things I would in a friend. Obviously, you need the sexual attraction, too, so it’s like your best friend who you are also really attracted to.”

As to their meet-cute, Portman finally talked about their “instant” connection when she was a guest on Today. “I met my husband on [Black Swan], so I think I was in, like, dreamland. So it was pretty … it seemed pretty fun the whole time,” she told host Hoda Kotb. “It was beautiful, but I don’t know about instant [connection]. It was, like, I really got to know him and then that is when it seemed, ‘Oh, right, this is the person.’”

Aside from being the right person, Millepied has also been the right collaborator, especially for Portman’s projects that involved dance, like the 2018 film Vox Lux. Speaking about Millepied’s choreography, Portman told PEOPLE about her “talented” husband. “It was fun to get to watch him create because I don’t often watch him in the studio. Just to see the ease and the expertise that he has, and of course with different kinds of dance too, was really, really stunning,” she said, adding that it “was really fun because I think he knows me so well, and what my strengths and weaknesses are in dancing.”

The couple welcomed their second child, Amalia, in 2017, and these days, Portman said it’s her kids she tries to impress the most. “I feel like it’s the phase of my career where I’m really trying to just impress my kids,” she told Variety. “My 5-year-old and my 10-year-old were so enthralled by this process, getting to visit the set and see me dressed up in a cape. It made it really cool. You know, it’s very rare that my kids are like, ‘Please go to work!’ Usually, it’s quite the opposite.”

Though her family unit is strong, don’t expect to find personal posts on the Star Wars actor’s social media accounts. Per PEOPLE, Portman shared a rare wedding throwback photo on Instagram on the couple’s eighth anniversary in 2020. “Still my favorite dance partner. #8years,” the actor wrote on the since-deleted post. Though both Portman and Millepied have scrubbed their social media platforms of each other, it’s no cause for alarm. The two seem to be doing just fine and even attended the premiere of Thor: Love and Thunder together last July 5, 2022.

More like this
Selena Gomez Confirms She's Single Amid Drew Taggart Dating Rumors
By Martha Sorren, Jake Viswanath and Jack Irvin
Jennifer Lopez Calls Moving In With Ben Affleck's Family An “Emotional Transition”
By Alyssa Lapid
Who Is Pete Davidson Dating? He & Chase Sui Wonders Got Caught Kissing
By Jake Viswanath
John Corbett's Wife Bo Derek Once Revealed If She's Team Aidan Or Team Big
By Alyssa Lapid
Get Even More From Bustle — Sign Up For The Newsletter
From hair trends to relationship advice, our daily newsletter has everything you need to sound like a person who’s on TikTok, even if you aren’t.