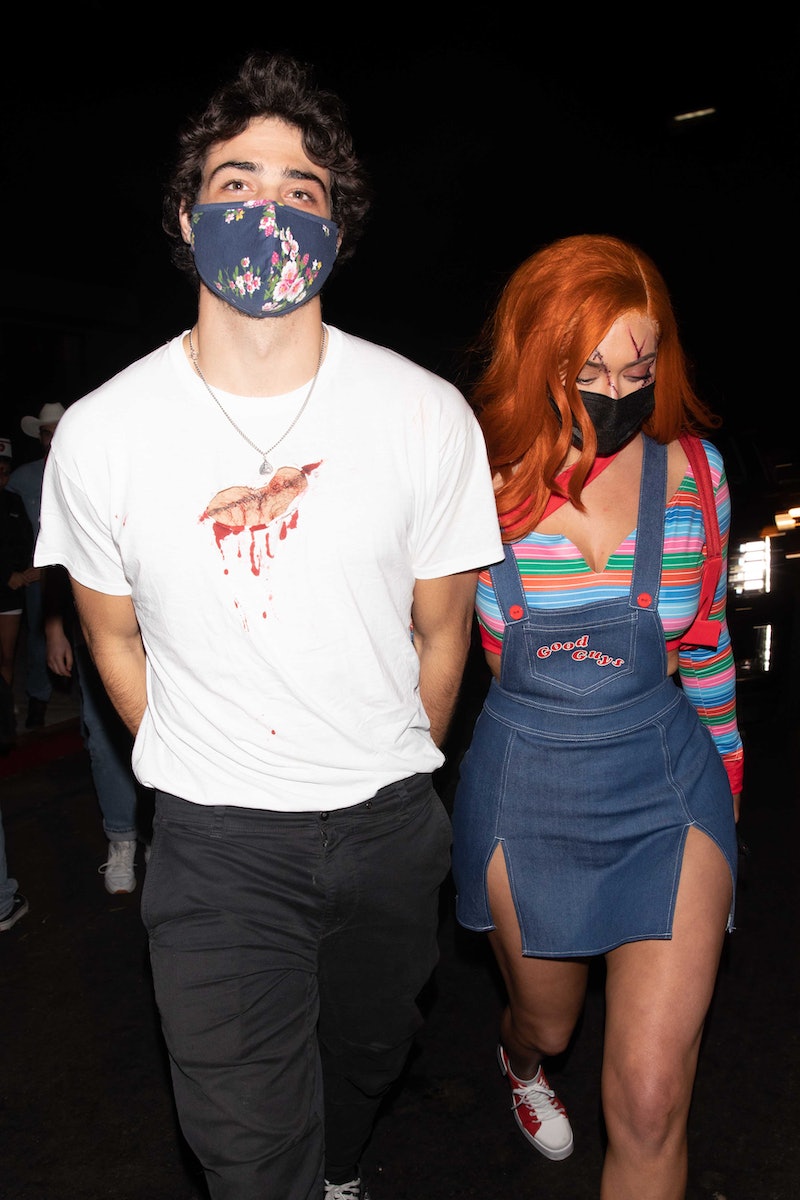 As Netflix's To All the Boys: Always and Forever wraps up Jenny Han's romantic coming-of-age story about Lara Jean and Peter Kavinsky, it's only natural to wonder whether one of the series' breakout stars, Noah Centineo, is single or taken. Hate to break it to the die-hard fans who are holding out hope Centineo would do the jeans pocket spin with them, but it seems Centineo is dating Kylie Jenner's best friend Stassie Karanikolaou.

Rumors of Centineo, 24, and Karanikolaou, 24, dating began in June 2020 when Stassie fans noticed her and Centineo exchanging flirty messages on Instagram. "Give my damn jacket back woman. PLEASE," Centineo wrote to Karanikolaou in her comments after posting a fiery picture of herself wearing an oversized black and red sports jacket and white T-shirt. Karanikolaou then playfully responded, "What are u talking about it's my jacket."

Later that year, both were spotted in public spending time with one another for Halloween, as a source from E! News stated they were "officially dating." (The two young Hollywood mainstays still haven't confirmed the news themselves.) The source continued, "It started as them getting together as friends to film a project, but they ended up connecting and having chemistry." The insider also told E! that not only are Centineo and Karanikolaou "super into each other," but Jenner herself also gives the relationship her BFF stamp of approval.

"It's an easy relationship, and all of her friends love him," the source explained. "Kylie thinks they are cute together. They both love going on dates, going out to restaurants, but also love hanging out at either of their houses just chilling, laughing, and having fun."

Before Centineo and Karanikolaou reportedly found love in a global health crisis, he dated model Alexis Ren for a little over a year. He's also been linked to Emily in Paris star Lily Collins and former Disney child actress Kelli Berglund.

More like this
Here’s Everything Coming To & Leaving Netflix In February
By Jake Viswanath
Selena Gomez Confirms She's Single Amid Drew Taggart Dating Rumors
By Martha Sorren, Jake Viswanath and Jack Irvin
Pamela Anderson’s Dating & Marriage History Could Be Its Own TV Series
By Jake Viswanath
Love Is Blind’s Natalie Claims Shayne Signed Up For 'Perfect Match' While They Were “Still Together”
By Brad Witter
Get Even More From Bustle — Sign Up For The Newsletter
From hair trends to relationship advice, our daily newsletter has everything you need to sound like a person who’s on TikTok, even if you aren’t.