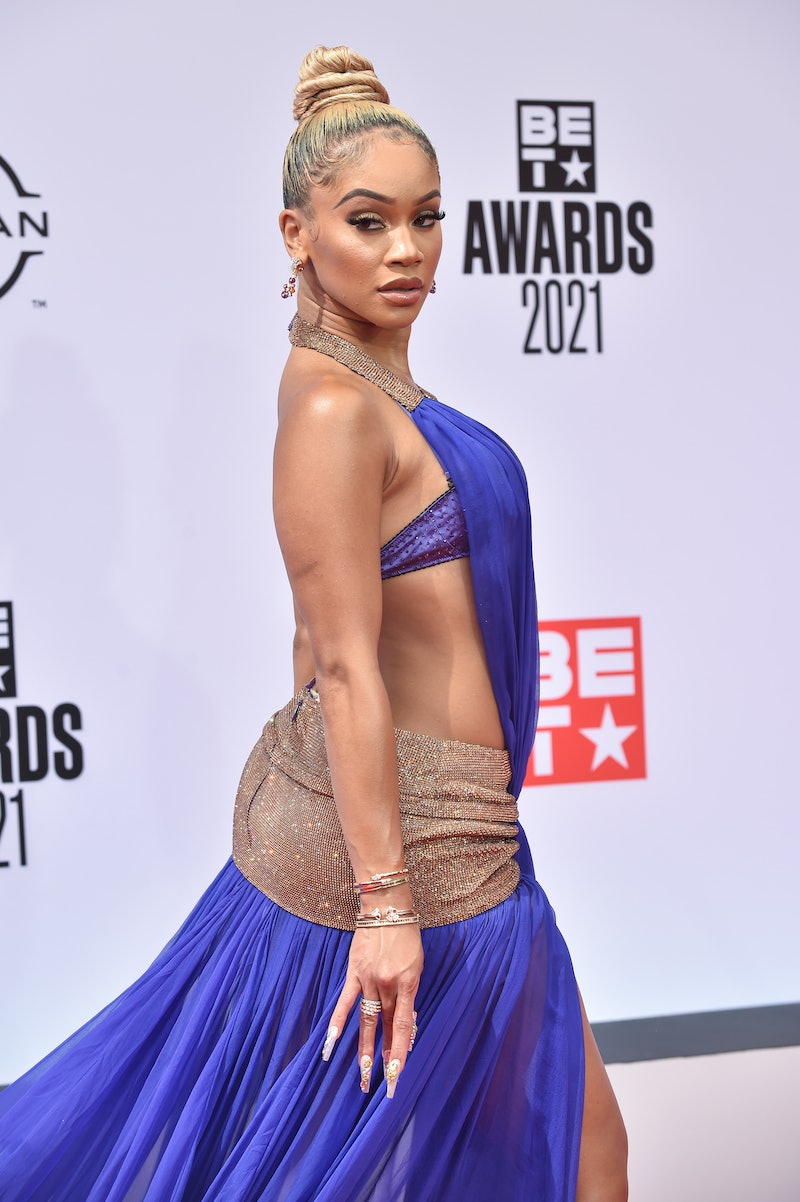 The MTV Video Music Awards are fast approaching and so are some sure-to-be-iconic red carpet looks. One artist who always serves on the red carpet fashion front is Saweetie. From asymmetrical long gowns to strategically-draped frocks, the “ICY GRL” rapper’s appearances are a testament to her style.

The grown-ish actor also gets photographed (or interviewed, for that matter) on the red carpet with a plus-one, and who stands beside her is usually noteworthy. With two nominations at the upcoming Sept. 12 VMAs, including the coveted Best New Artist prize, many await what the “Best Friend” singer will be wearing — and who she’ll be wearing it beside. Here’s everything to know about Saweetie’s recent dating history, including whether or not she recently reunited with an ex and what her plus-one plans for the red carpet might be.

The rapper was most recently linked to fellow rapper Jack Harlow after a red carpet run-in at the BET Awards last June. During a pre-show interview with The Shade Room, Harlow can be seen going up to Saweetie and introducing himself to her. The IRL meet-cute — complete with a sustained handshake — sent fans into a frenzy. However, in an interview immediately after, Harlow denied trying to shoot his shot and said there was “a friend vibe.”

A month prior, Saweetie was swept in the rumor mill with gossip about her being paid $100,000 via Cashapp by NBA player James Harden to agree to a date. Migos member Offset made the rumor stickier when he liked a tweet about the two. Saweetie didn’t respond to the allegations, but Harden vehemently denied them on his social media, posting, “PEOPLE REALLY JUST ON HERE MAKING SHIT UP FOR CLOUT. I REALLY STAY OUT THE WAY. CASHAPP 100K? BEAT IT.”

For two years, the “My Type” singer dated Quavo, one-third of rap group Migos. As per Quavo’s revelations to GQ, their romance began with him sliding into Saweetie’s DMs with a snowflake emoji, referencing her 2017 hit.

After years of public appearances, the pair called it quits with their breakup playing out on Twitter. Saweetie announced her new relationship status on Mar. 19, saying, “I’m single. I’ve endured too much betrayal and hurt behind the scenes for a false narrative to be circulating that degrades my character.” She added, “Presents don’t band aid scars and the love isn’t real when the intimacy is given to other women,” sparking rumors that the Migos rapper cheated.

Quavo defended himself in a series of tweets. “I had love for you and disappointed you did all that,” he wrote. “You are not the woman I thought you were. I wish you nothing but the best.” She replied, “Take care.”

When rumors of a reunion between the two sparked in August, Twitter was rattled. One user posted, “If quavo get bacc wid saweetie im calling my favorite ex.” Others speculated it was Harlow who prompted the alleged reconciliation.

On Friday, Aug. 26, Saweetie quickly quelled the rumors on Twitter, calling an article referencing them “quietly spending time together” a “pinnochio ass article.” She also redirected attention back to her well-received McDonald’s collab, the Saweetie Meal.

If Saweetie is dating anyone, it’s certainly on the down-low.

More like this
Everything To Know About Taylor Swift’s 10th Studio Album, 'Midnights'
By Grace Wehniainen and Jake Viswanath
Who Is Nick Cannon Dating & How Many Kids Does He Have?
By Jordyn Tilchen and Radhika Menon
Dan Levy Appears In The Latest Teaser For The Weeknd's HBO Series, 'The Idol'
By Jake Viswanath
How Ghosts Inspired Kesha’s New Music
By Jake Viswanath
Get Even More From Bustle — Sign Up For The Newsletter