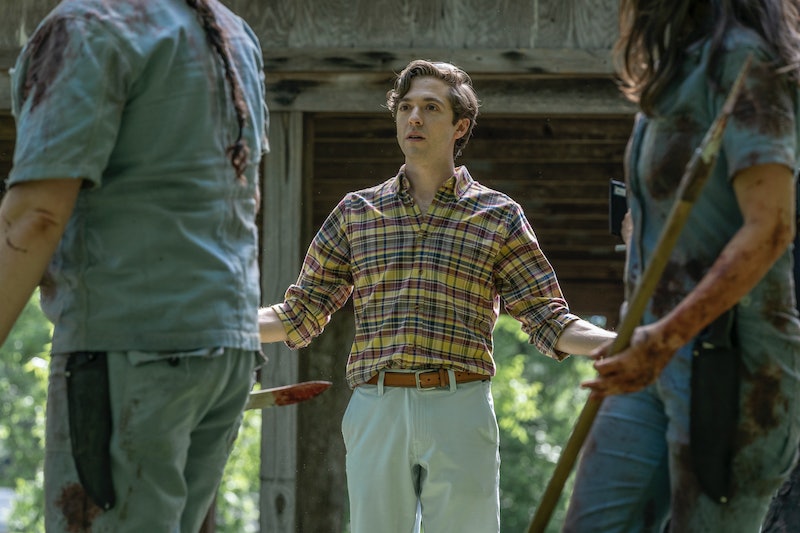 Spoilers ahead for The Walking Dead Season 11, Episode 7 and comics. Eugene and his friends’ first few days at the Commonwealth aren’t really going great. First, Eugene tampered with the community’s radio. Then, while doing time clearing walkers with Stephanie (who isn’t really Stephanie), he added another offense to his list: insulting the governor’s son and punching him in the face. While it was certainly satisfying to see Eugene stand up for himself, Sebastian was probably the worst possible person he could test his bravado on.

Sebastian is the kind of guy who unironically addresses someone as a plebeian, which says everything you need to know about him. Though he isn’t in charge of the Commonwealth himself, he is the very privileged son of its leader — which gives him clout around the community and security detail from Mercer. Sebastian’s outburst at the orange-suited soldier is also one of the earliest signs of tension between Mercer and the Commonwealth’s rigid class system.

Sebastian is far from the first jerk son of a political leader we’ve met on The Walking Dead. Remember Deanna’s son, Spencer, from Alexandria? He and Sebastian have another thing in common: a hatred for Rick Grimes. While Spencer was killed by Negan before he had a chance to act on his resentment, Sebastian was more successful in the Walking Dead comics — in fact, he ultimately killed Rick in the series’ penultimate issue. Sebastian shot Rick after he gave a rousing speech that endeared the Commonwealth to him, threatening to wrest away authority (and that cushy lifestyle) from the Miltons. As The Walking Dead creator Robert Kirkman explained in that issue, Sebastian was fated to be “the one who kills Rick Grimes” even before he made his debut in the comics, per CBR. Given that Sebastian was written to play such an important role, it follows that his onscreen iteration will be just as dangerous.

Now that The Walking Dead’s biggest, brattiest final boss has been introduced, you might be worried about one key question: who will die instead of Rick, who was mysteriously whisked away on a helicopter in Season 9 and hasn’t been seen since? At this point, anyone is a possibility — though of course, Eugene’s odds are looking particularly scary after that rocky introduction in Episode 7. As Lance Hornsby told Eugene, “the price just got higher” for his group’s freedom and safety. So, getting on Sebastian’s bad side is a mistake Eugene and co. could be paying for until the very end.

After all, Sebastian’s beef with Rick in the comics was never really about Rick, but about preventing outsiders from shaking up the status quo — which our group of survivors is pretty good at by now.