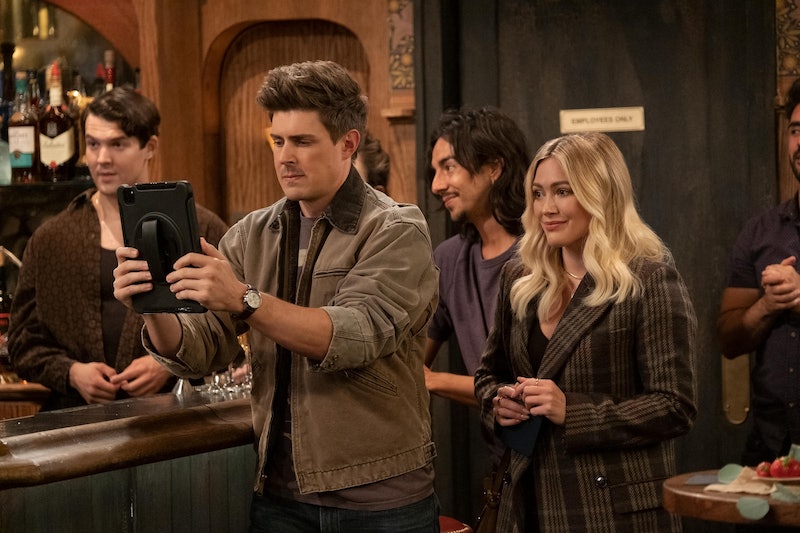 Seven years after How I Met Your Mother finally revealed how Ted Mosby (Josh Radnor) met the mother of his children — and, controversially, how he reunited with his true love Robin (Cobie Smulders) — Hulu is flipping the script. How I Met Your Father, set to premiere on Feb. 18, will follow a woman named Sophie as she recounts to her son how she met his father.

The series is largely separate from the HIMYM universe and introduces a new set of characters. As future Sophie (played by Sex and the City’s Kim Cattrall) regales her son with her love story in 2050, the show flashes back to 2020 Sophie (Hilary Duff), who’s still single and dating in New York City. Rounding out the cast is Sophie’s close-knit group of friends: Francia Raísa (grown-ish) as her roommate Valentina; Chris Lowell as Jesse, an aspiring musician and part-time Uber driver; Tien Tran as Jesse’s adopted sister Ellen; Suraj Sharma as Jesse’s roommate and best friend Sid; and Tom Ainsley as Charlie, Valentina’s boyfriend.

Aside from Duff and Cattrall, Lowell, 37, is one of the most recognizable faces in the cast. Fans will remember him as Veronica Mars’ Stosh "Piz" Piznarski, the sweetheart college radio host Veronica (Kristen Bell) eventually begins dating in Season 3, or from Grey’s Anatomy spinoff Private Practice, on which he played William “Dell” Parker, the receptionist at the health and wellness group where Addison (Kate Walsh) works. More recently, Lowell played Al Monroe — one of the “nice guys” from Emerald Fennell’s Oscar-winning 2020 film Promising Young Woman — and starred in Netflix’s GLOW as the hapless Bash Howard, an immature millionaire who clumsily financed the Gorgeous Ladies of Wrestling team. Seeing him back onscreen will be especially comforting for fans of the wrestling comedy: though Season 4 was already in production, Netflix opted to cancel the show in late 2020, much to the disappointment of viewers.

Offscreen, Lowell and his longtime girlfriend Kerry Bishé (Halt and Catch Fire, Argo) are parents to one daughter. He made the announcement on Instagram in July 2021, revealing they’d welcomed a healthy baby girl six months prior. Lowell has shared many pictures from Bishé during her pregnancy on his Instagram page, where he frequently posts artsy black and white pictures. Outside of his acting career, he’s also a photographer, and has a website featuring his portfolio.

Lowell’s How I Met Your Father character is described as intelligent and edgy with an overall cynicism about love. In the trailer, we learn that he’s having a rough time after going through a breakup with a character named Meredith. We also see some longing glances between him and Sophie, as well as a scene on a subway car in which the two discuss how “today is the first chapter in [their] next great love story.” Could that love story be theirs? Jesse is the male lead opposite Duff as Sophie, which may mean they’ll have a similar dynamic to Ted and Robin’s will they, won’t they relationship in HIMYM. However, given the reception to the ending of HIMYM, the sequel may opt not to have them end up together or take a much different approach to how they wind up there.

More like this
Conversations With Friends' Endometriosis Scenes Are As Brutal As It Gets
By Ivana Rihter
Where Is Allan Gore Now? The ‘Candy’ Subject Moved On Shortly After Betty’s Death
By Gretchen Smail
The True Story Of Candy Montgomery From Hulu’s True Crime Series
By Radhika Menon
Betty Gore’s Daughter Honored Her After She Became A Mother Herself
By Brad Witter
Get Even More From Bustle — Sign Up For The Newsletter