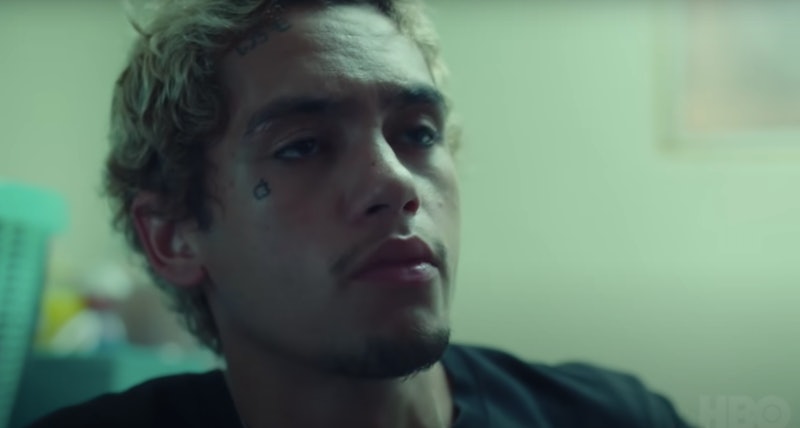 After a two year wait, HBO will reunite fans with the tortured teens of Euphoria on Jan. 9. Season 2 picks up in the continued aftermath of Jules’ decision to leave town without Rue and Rue’s subsequent relapse, which we got a glimpse of in the show’s two special bridge episodes last year. Potentially complicating the fractured state of their relationship is Dominic Fike, who plays a new friend of Rue’s named Elliot. Fike has remained tight-lipped about his character, telling Variety only that he’s a “homie” who hangs out with Rue and Jules. However, he did shed a little insight on the dynamic behind the scenes, calling co-stars Zendaya (Rue) and Hunter Schafer (Jules) the “nicest people ever.”

“They’re both really funny. We were doing a scene the other day and had to keep redoing it because we just couldn’t stop laughing,” Fike said. He also mentioned that he and his character have a lot of similarities. “He’s exactly like me. It’s sh*t I would say and sh*t I would do. I don’t have to do much acting.”

There’s one key difference, though: While he calls his character a “degenerate,” Fike is now sober, which he told Variety has put him in a much better headspace to create.

Read on to learn more about Euphoria’s newest addition to the cast.

Who Is Dominic Fike?

A 25-year-old rapper and musician from Naples, Florida, Fike first broke big in 2018 with his debut single “3 Nights.” He later collaborated with Halsey and Brockhampton, releasing his debut album, What Could Possibly Go Wrong, in July 2020. He’s since worked with the likes of Justin Bieber, St. Vincent, Anderson. Paak, and Paul McCartney.

He’s currently working on his sophomore album, which he hopes will be different from his first record. “I felt like I had too many producers in the room and too many people telling me what was right and what was wrong,” Fike told Variety. “Now it’s just my mind, similar to how I made [my 2018 EP] Don’t Forget About Me, Demos. There were no other people in the room to tell me anything, and I’m not sending this music to other people to give me f*cking opinions on it.”

Fike is currently dating actor Diana Silvers (Booksmart, Ma). In a 2021 interview with GQ, the couple explained that they met after Fike slid into Silvers’ DMs. “Dom sent me a demo on Instagram called ‘Peanut Butter Bagel.’ I responded, ‘I’ve never had a peanut butter bagel, but the song is very good,’” Silvers explained. She said that she wasn’t overly familiar with Fike’s music before they started talking, but Fike mentioned he’d loved Silver in Space Force (2020), then invited her to come to a show. “I immediately responded, ‘See you in three years,’” she said. Silvers asked Fike to go on a walk the next day. “The rest is history,” he told GQ. “We're in a full-blown relationship. On our first date, we talked about Paul McCartney, and I hadn't talked about Paul in so long or The Beatles. It kind of manifested the Paul [collaboration].”