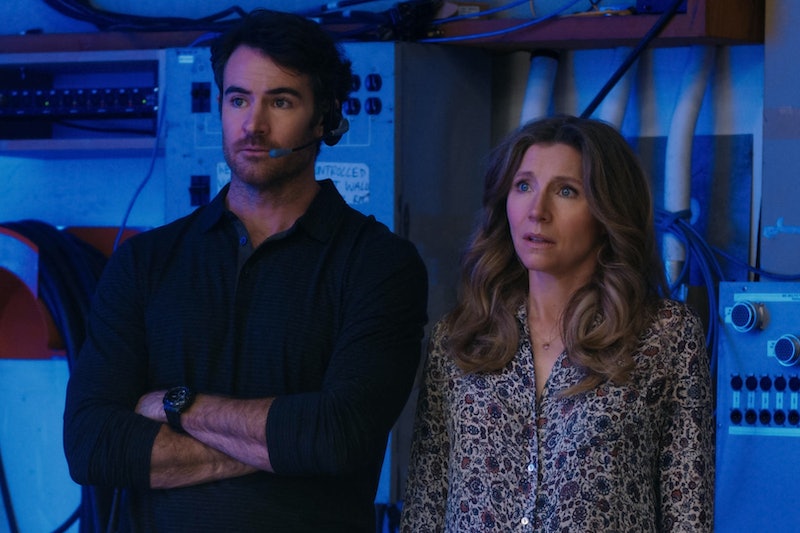 Firefly Lane, Netflix's new series about two best friends and their decades-long relationship, stars several familiar faces from the TV landscape — including Katherine Heigl of Grey's Anatomy fame as Tully and Scrubs' Sarah Chalke as Kate. But you may be wondering where you've seen the show's male lead and apparent point in its love triangle, Johnny Ryan, before. His name is Ben Lawson, and this isn't his first time in a Netflix original series.

During his latest turn as Johnny on Firefly Lane, Lawson seems to be assuming a charming role. In the trailer, he first appears in slow-mo, smiling, and is Kate's apparent work crush. Tully asks, "How long have you been wanting to do the deed with the man who signs your paycheck?" The trailer then shows flashes of Johnny at a wedding, work celebration, and even barside with Tully where they kiss, ostensibly to Kate's dismay.

It's difficult to tell how this decades-long story will turn out, but the author of the original Firefly Lane novel, Kristin Hannah, hinted it'll be a dramatic story. On her website, she wrote that the women "think they’ve survived it all until a single act of betrayal tears them apart…and puts their courage and friendship to the ultimate test."

Years before Lawson landed this prominent Netflix role, he picked up his first major credit on a popular Australian soap titled Neighbours from 2006 to 2008. During his turn as Frazer Yeats, he was nominated for a Logie Award (an Australian TV honor). It was on Neighbours that Lawson first learned what it really took to be an actor, gaining valuable insights on camera technique and surviving being shown up by his 13-year-old costar, he admitted to the Sydney Morning Herald. "After that, I felt so much more confident about going across to LA to take a swing," he said in the 2018 interview.

The show also served as a launchpad for the Hemsworth brothers and fellow Aussie actor Margot Robbie. Incidentally, Lawson and his brother Josh played Lachlan and James Murdoch, respectively, in 2019's Bombshell, for which Robbie earned a Best Supporting Actress nomination at the Academy Awards. In addition to Neighbours and Bombshell, Lawson has built an impressive resumé of movie and TV roles.

Lawson played Liberty High School baseball coach Rick Wlodimierz on 13 Reasons Why. As coach and creator of the notorious athletes' clubhouse, Rick promoted team unity to a fault and often overlooked the boys' worst behavior. More recently, and much more lightheartedly, Lawson had a memorable role on The Good Place as Larry Hemsworth, the fourth, fictional brother of Chris, Liam, and Luke Hemsworth. Naturally, only a man with such beloved, beautiful brothers could feel inferior for being a "dumb old pediatric surgeon who barely has an eight-pack."

The actor also played Damian Rennett on Designated Survivor and appeared in Modern Family and No Strings Attached (2011). You might have also seen Lawson on the Netflix anthology series, Dolly Parton's Heartstrings, featuring Hallmark-esque stories based on the famous singer's songs.

Following Firefly Lane, which premieres Feb. 3 on Netflix, Lawson will appear in Everything I Ever Wanted to Tell My Daughter About Men. According to the film's website, the work is composed of vignettes directed by 21 women and is a cautionary tale of all the men one woman has ever been with in the hopes her daughter doesn't make the same mistakes she did.

More like this
Here’s Everything Coming To & Leaving Netflix In October
By Jake Viswanath
Caleb McLaughlin Details Racism From 'Stranger Things' Fans
By Radhika Menon
The ‘Emily In Paris’ Season 3 Release Date Is Here, Plus The First Footage
By Bustle Staff
The 'Reasonable Doubt' Cast Includes A 'Save The Last Dance' Reunion
By Grace Wehniainen
Get Even More From Bustle — Sign Up For The Newsletter