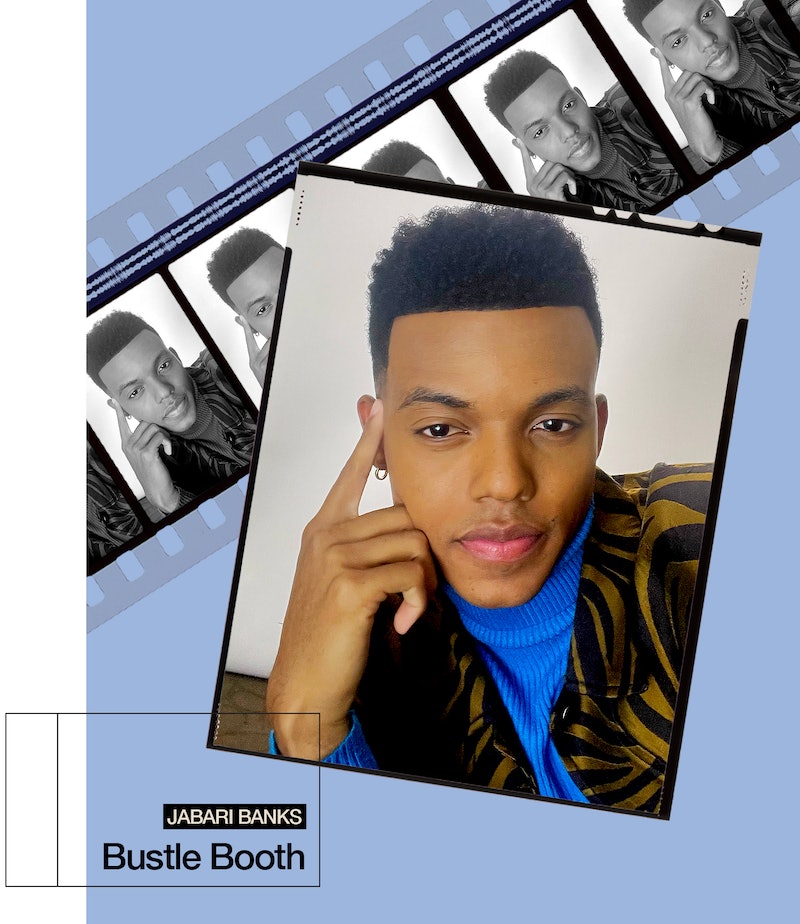 Starring in your first television show is a daunting prospect for any actor. Playing a character as iconic as the title role in a reboot of The Fresh Prince of Bel-Air? Petrifying. So when it came to playing Will in Peacock’s Bel-Air, a dramatic reimagining of the original ‘90s sitcom, Jabari Banks channeled some simple advice he received from original star Will Smith: be yourself. “The shoes I’m filling are pretty big, and it’s easy to slip into trying to be like [Smith],” the 23-year-old tells Bustle. “[But] he was so unapologetically himself, and that’s how I [wanted to approach the role].”

Stepping into Will’s shoes wasn’t a big leap for Banks, who, like his character, grew up in West Philadelphia playing basketball. He spent his childhood watching his parents’ DVDs of Fresh Prince; when Bel-Air started casting, his dad sent him an article about it and noted how perfect he would be for the role. When Banks’ agent presented him with an opportunity to audition two months later, he felt like he’d manifested it. The show’s team wasn’t necessarily looking for someone from Philly, but growing up in the same hometown as Will certainly helped inform Banks’ portrayal. “I know the culture, and I know the streets,” he says.

Following the same premise as the original, Bel-Air centers around Will after he gets caught up in a fight that escalates to his arrest. Afterward, his mom sends him to live with his wealthy aunt and uncle in Los Angeles’ Bel-Air neighborhood. Being thrown into a world of mega-mansions and charity auctions is a culture shock for Will, but one that pushes him to expand his perspective about what it means to be successful and Black. “When you think about being Black and successful sometimes, you can go the route of, ‘Oh, they lost touch with who they are and their Blackness,’” Banks says. “[But] we made sure that we touched on the fact that Will isn’t coming to Bel-Air to teach the Banks family how to be Black again. They know who they are. They know about their Blackness.”

In exploring the intersection between race and wealth, Peacock’s version of the story strikes a darker and more serious tone than the ‘90s comedy. But Banks is confident that the reboot will appeal to both new and OG fans alike. “These are all of the characters that we know and love, and this is a version of them that’s much deeper, and we go into the inner workings of their life,” he says. “There’s going to be a lot of callbacks to the original, a lot of Easter eggs.”

Get to know more about Banks in his Bustle Booth questionnaire below.

Caramel Frappuccino, no whipped cream, and lots of espresso in it because they call me in at 4:30 a.m.

“Mama said life is like a box of chocolates” from Forrest Gump.

I really loved The Boondocks.

I love The Harder They Fall — great movie, cinematic masterpiece in my opinion. Jonathan Majors, he’s amazing. I also loved him in Lovecraft Country.

It would be fun to be on this new show, My Mom, Your Dad. These kids set their parents up with different dates, and it gets cringey and awkward because you’re seeing your parents date again. I have a single mom, and that’d be weird for me, but I think it’d be funny.

“I Will Always Love You” by Whitney Houston. I’ll tear that up.

Morgan Cooper, the creator [of Bel-Air]. He leads with gratitude, and we always talk about the difference between paying it forward and giving back, and what that looks like for me. I just hope to do the same for someone and pay it forward.

That I gave it everything I have and I never gave up.