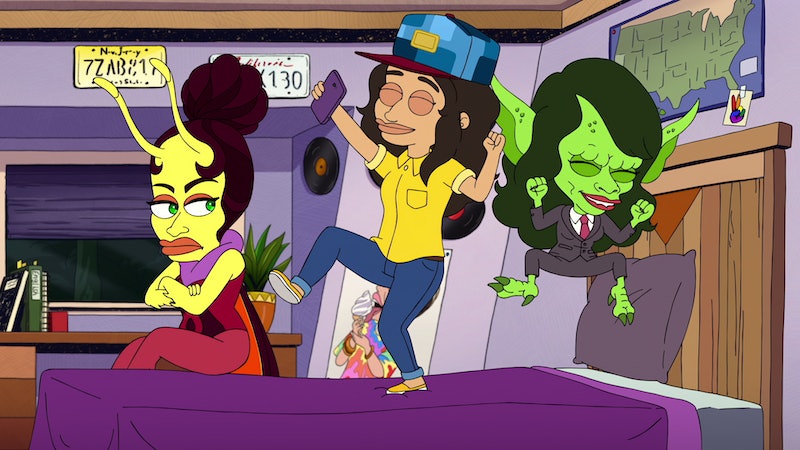 The world of Big Mouth is expanding. March 18 marks the premiere of Human Resources, a spinoff following the hormone monsters from the original Netflix animated comedy. In addition to Big Mouth characters like Connie the Hormone Monstress (Maya Rudolph), the Shame Wizard (David Thewlis), and the newly introduced Lovebugs (Brandon Kyle Goodman, Keke Palmer, Pamela Adlon), the show also introduces new creatures. Among them is Petra the Ambition Gremlin, voiced by Rosie Perez.

“It’s so funny. One of our writers, Mitra Jouhari, just randomly texted me Rosie’s name. And I was like, ‘Yes, that’s who it is.’ It’s the only voice we can imagine now. She’s perfect,” Human Resources co-creator Kelly Galuska said of casting Perez in Netflix press materials.

Perez is an industry veteran who broke out in the early ‘90s following roles in Do the Right Thing (1989) and White Men Can't Jump (1992). She’s been a mainstay in the business ever since, appearing in films such as 2001’s Riding In Cars With Boys, 2008’s Pineapple Express, and 2010’s The Other Guys, as well as shows like Nurse Jackie, Search Party, and The Flight Attendant. She’s also found her way into franchise work, appearing in the 2020 DC comics movie Birds of Prey as one of the titular “birds,” Renee Montoya.

Outside of her live action roles, Perez has contributed voice work to several titles over the years. Some of her most notable parts include Choni in The Cleveland Show, Click in Go, Diego! Go! and Chel in the 2001 Dreamworks animated adventure film The Road To El Dorado. As Petra in Human Resources, Perez embodies a green, pointy-eared gremlin who — as the name suggests — represents humans’ ambitions. She’s described as a competitive and driven creature who isn’t afraid to tell it like it is. She cares about getting ahead above all else — sometimes to a fault, as she believes success and accomplishment are more important than her clients’ emotional needs.

While Petra isn’t featured much in the Human Resources trailer, you do get a sense of her no-nonsense approach. There are quick sequences of Petra kicking in doors, as well as a brief exchange during which Rochelle, a Lovebug voiced by Keke Palmer (Nope, Hustlers) nervously asks “What just happened?” To which Petra replies “You f*cked everything up that’s what just happened.” In fact, the trailer includes several scenes between Petra and Rochelle as they butt heads working for the same client. Hopefully they can find a better balance by season’s end.