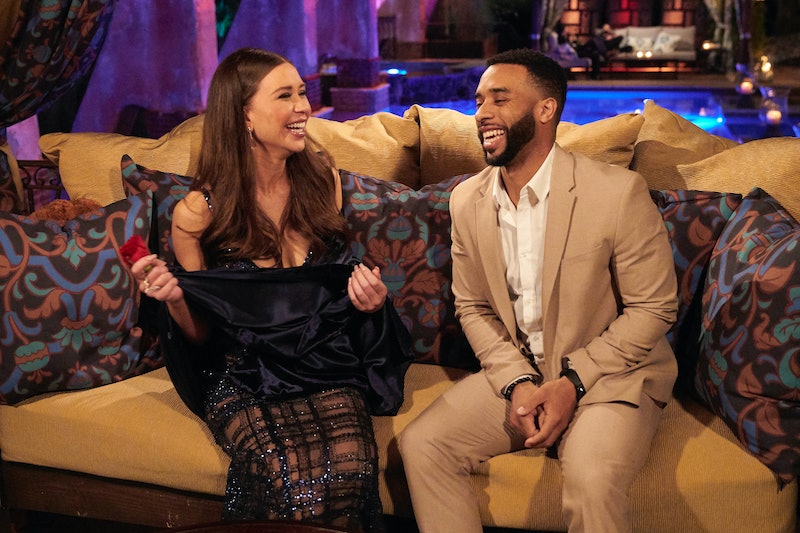 As Bachelor Nation knows, there is a fairly long track record of first impression rose winners ending up on one knee. For instance, six of the last nine first impression rose winners ended up getting engaged on The Bachelorette. However, as it stands this season, Gabby Windey is bucking that trend. Despite entering the season as one of the frontrunners, Mario Vassall was sent home during Week 5’s rose ceremony. While Gabby awarded Mario the first impression rose, their relationship quickly dwindled, especially considering she never asked him on a solo date. Mario’s chances got slimmer once Logan Palmer got cold feet about pursuing Rachel and wanted to start exploring a relationship with Gabby.

The easiest way to explain what led to Mario’s demise is to travel all the way back to Episode 3. In that episode, Gabby and Rachel joined forces to change the rose ceremony process for the rest of the season. The episode climaxed with the men having to choose which woman they were going to commit to for the remainder of the show, which meant that there would be no going back once they had decided. Obviously, it led to some awkward rejections, but it helped Rachel and Gabby narrow down their suitors.

Mario was firmly in Gabby’s group and made it through Week 4’s tense rose ceremony. But once Week 5 came around and Logan shocked Team Gabby with his arrival, Mario and the others were instantly worried about what this new wild card would mean for their chances moving forward. Because Logan joined Gabby’s team, it meant that the bachelorette had to say goodbye to not one, but two contestants.

Earlier in the episode, Rachel and Gabby met to discuss Logan's flip-flop maneuver and clear the air about his choice to switch teams. The two danced around the conversation, ultimately avoiding a conclusive stance on Logan. “I think Gabby is interested in Logan,” Rachel said after their conversation, adding that she doesn’t believe Logan is trustworthy. She also mentioned that she hopes he’s sent home. However, beyond the Logan debacle, it means that Gabby had fewer roses at her disposal.

When it finally came time for the rose ceremony, Logan acknowledged the unpopularity of his decision but made it clear that he was following his heart. The men of Gabby’s group weren’t all that elated to have another man in their midst. Moments before the ceremony, Mario said, “I think my chances of getting a rose from Gabby are actually pretty low.” Despite his dwindling confidence, he did manage to use his time during the cocktail party to speak with Gabby, even donning the same suit he wore on night one, in hopes of rekindling his once-promising relationship with the Bachelorette.

Ultimately, Mario was proven right, and Logan was awarded Gabby’s final rose of the evening over Mario and Michael. Thus, Gabby’s first impression rose winner was sent packing, while Logan felt immensely rewarded for taking a big risk. “It’s an even playing field now, and it’s anyone’s game, so it may as well be my game,” Logan told the cameras. Elsewhere, Mario had a somber goodbye with Gabby before joining the likes of Abigail Heringer, Teddi Wright, and Greg Grippo as recent first impression rose winners to go home early.

When Episode 5 finished airing, Mario had taken to his Instagram Stories to post some behind-the-scenes footage. Some of which included him and his castmates in their suits, captioned “Groups getting a lot smaller,” as well as another clip where he’s seen talking to Gabby on the couch, captioned, “I’m trying lol.” While Mario was sad to go, he seems to still relish his time on The Bachelorette.

More like this
The New Bachelor Will Be Announced Next Week & Here Are The Top Contenders
By Grace Wehniainen
Erich Addressed His Text Message Scandal & Twitter Is Divided
By Kadin Burnett
So... When Are Gabby & Erich Getting Married?
By Kadin Burnett
All The Clues About Gabby & Erich's Relationship After 'The Bachelorette' Finale
By Kadin Burnett
Get Even More From Bustle — Sign Up For The Newsletter