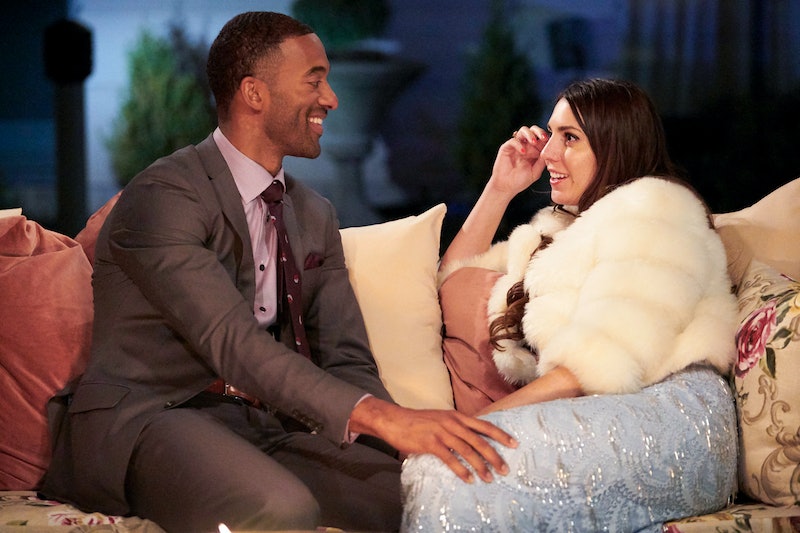 After weeks of drama, fighting, and backstabbing, Queen Victoria has officially been dethroned. During the Feb. 1 episode of The Bachelor, Matt sent Anna home for spreading rumors about Brittany. Then, he learned that there was another bully in the house: Victoria.

Newcomer Ryan revealed to Matt that Victoria had called her a "hoe" and had pitted the OG contestants against the new women, which made him question Victoria and his relationship with her. "I'm doing the other women a disservice by not making this a safe space," he said. "People's words are powerful."

Despite Victoria's attempts to assure Ryan that nothing she said was "malicious" or mean — and sobbing in various corners of the chateau over the possibility of being eliminated — Matt simply had enough of the drama and sent Victoria packing. Of course, in true villain fashion, she didn't leave quietly. "I honestly feel so sorry for you that you would listen to hearsay and not all the facts behind a situation," she told Matt before leaving without giving him a hug.

While Victoria was clearly upset with this turn of events, Bachelor Nation was delighted that her reign was finally over:

After being eliminated, Victoria tearfully ranted about Matt for not choosing her. "He's not my king and I'm still a queen," she told the cameras. "He's a jester. ... Matt's not the guy for me. I'm never dating another Matt again. I hate that name now." Victoria also tried once more to assert that she wasn't the source of the toxicity in the house: "The whole house is going to feel like sh*t [now] that I'm gone. I brought so many people so much joy."

The other women — and the audience watching at home — would likely disagree, considering the amount of drama that Victoria caused during her tenure on the show. She convinced Matt that Marylynn was "toxic" and bullied her out of their shared hotel room; she took a crown right off of Catalina's head; she stated that she likes to "express" herself through name calling; and in her final moments, she called fan favorite Katie "disgusting."

Despite all of the drama, Matt publicly defended Victoria up until her elimination, even denying that the show's producers were forcing him to keep her around. "No, that wasn't the case," Matt said during an appearance on Jimmy Kimmel Live. "She was great. I really enjoyed Victoria." During a conversation on the Bachelor Happy Hour podcast, Matt also defended the "queen" to former Bachelorette Rachel Lindsay. "Victoria is hilarious. She is one of the wittiest people I've ever met," he said at the time. "She's unapologetically herself."

More like this
This One Moment Was Cut During Johnny & Victoria’s 'Bachelor In Paradise' Reunion
By Kadin Burnett and Grace Wehniainen
Khloé Kardashian’s Son Was Born A Week Before Anyone Realized
By Jake Viswanath
Katherine Ryan Has The Funniest Response For Those Who Doubt Her Husband
By Alice Broster and Darshita Goyal
Are Victoria & Greg Still Together After 'Bachelor In Paradise' Reunion?
By Grace Wehniainen
Get Even More From Bustle — Sign Up For The Newsletter