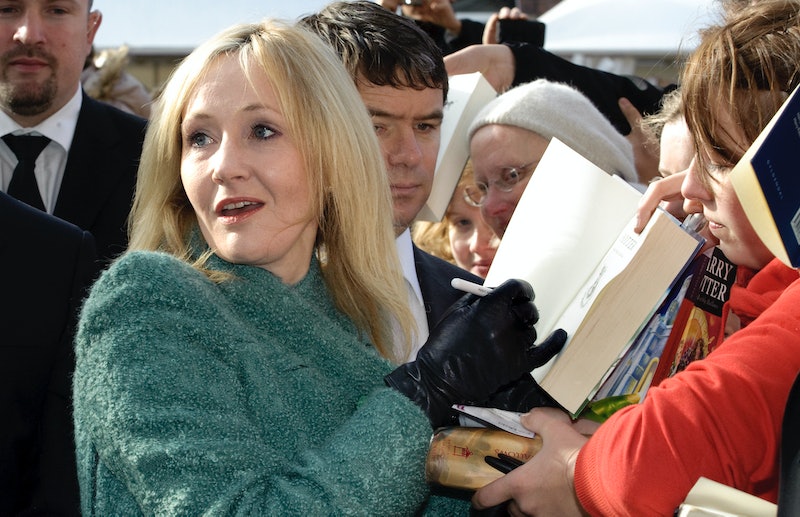 Following the success of HBO Max’s Friends reunion, the cast of Harry Potter are joining forces in a very special event to celebrate its 20th anniversary. Harry Potter: Return to Hogwarts will premiere on Jan. 1, 2022, and will see Daniel Radcliffe, Emma Watson, and Rupert Grint reunite in the Gryffindor common room for the first time since the franchise came to an end in 2011.

The author of Harry Potter will not appear in any new content for the reunion. Instead, her experience of her books being brought to the big screen will be shared through archival footage of clips recorded in 2019. She is also mentioned by actors such as Coltrane in the special.

Rowling has yet to comment on why she isn’t appearing in the reunion, but some have suspected that it may have something to do with her controversial anti-trans comments. In 2019, Rowling voiced her support for researcher Maya Forstater, who was fired for using “offensive and exclusionary language” against the trans community, which led some to describe the author as a TERF (trans-exclusionary radical feminist).

A year later, Rowling was in hot water again after criticising the phrase “people who menstruate”, which was used in an opinion piece about creating equality for global menstrual health. Following her comments, Radcliffe, Watson, and Grint distanced themselves from Rowling and voiced their support for the transgender community. However, both Fiennes and Coltrane have voiced their support for Rowling as the controversy has unfolded, and both will feature prominently in the reunion.

Some critics have commented on the strangeness of her absence. The Times review addressed the “missing key ingredient” of Rowling, while the Telegraph’s two-star review claimed the special “lacks the one person who could have offered real insights into the world she created”.

So as of now, it still remains unclear as to the particular reason why Rowling won’t be appearing in the Harry Potter reunion. But, as ScreenRant notes, it could be that “Warner and HBO are actively avoiding more backlash” from Rowling appearing in the special given the above concerns.

More like this
Turns Out George Clooney Is A Huge Fan Of This Classic British Game Show
By El Hunt
Everything To Know About The 'Daisy Jones & The Six' TV Series
By Maxine Harrison and Brad Witter
Rupert Grint Just Shared A *Major* Update About Ron Weasley’s Future
By El Hunt
Michaela Coel Has Some *Thoughts* About The Nepo Baby Discourse
By Maxine Harrison
Get The Very Best Of Bustle/UK
Sign up for Bustle UK's twice-weekly newsletter, featuring the latest must-watch TV, moving personal stories, and expert advice on the hottest viral buys.

This article was originally published on Dec. 28, 2021