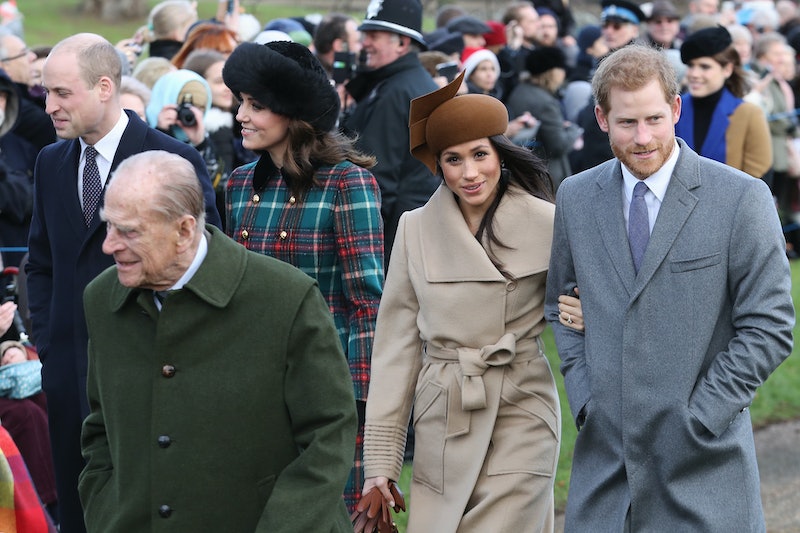 “His Royal Highness passed away peacefully this morning at Windsor Castle,” read the statement announcing Prince Philip’s death on April 9. The tributes — from celebrities and the royal family alike — started flooding in. Questions about the Duke of Edinburgh’s funeral too were quick arise. Will there be a state funeral and who will attend the ceremony? More importantly, will Prince Harry and Meghan Markle attend Prince Philip’s funeral?

As consort to the Queen, the Duke was entitled to a state funeral. However, per his wishes, he will instead be honored in a ceremonial Royal funeral, as Queen Elizabeth The Queen Mother was. The plans were laid out in an official announcement from the Royal Family on April 10, which explained that the funeral will take place on April 17 at 3 p.m. at St George’s Chapel, the same 800-capacity Windsor Castle location that hosted the Sussexes’ wedding in May 2018. The funeral will include a procession that highlights Prince Philip’s special relationship to the military and will culminate in his interment in the Royal Vault in St George’s Chapel.

Due to the pandemic, the funeral will be unusually low-key. The announcement states that the service “will be attended by Her Majesty The Queen and Members of the Royal Family.” Prince Harry will be among them, according to the Associated Press, but his wife, Meghan, the Duchess of Sussex, will not join him as she is pregnant and her doctor advised her not to travel. (Though her due date has not been confirmed, the Sussexes revealed they are expecting a girl “sometime in the summer” during their landmark interview with Oprah Winfrey.) Under current COVID-19 restrictions up to 30 people are permitted at funerals, as reported by the BBC, though government guidelines say that number may shift based on venue capacity. The new Phase 2 reopening guidelines raises the limit on wake attendees from six.

The Duke and Duchess of Sussex stepped back from their royal roles at the start of 2020, relocating their family to California. Though the couple’s relationship with the Royal Family has been fraught following the devastating revelations made in their interview with Winfrey, they were understood to be in close contact with the Queen on the subject of Prince Philip’s health particularly.

"This morning, I woke up earlier than H,” Meghan recounted to Winfrey, “and saw a note from someone on our team in the UK saying that the Duke of Edinburgh had gone to the hospital. But I just picked up the phone and I called the Queen just to check in. That’s what we do, being able to default to not having to every moment go, ‘Is that appropriate?’”

On April 9, Prince Harry and Meghan paid tribute to Prince Philip via a post on their foundation Archewell’s website. “In loving memory of His Royal Highness The Duke of Edinburgh,” the holding page read. It added the message: “Thank you for your service... You will be greatly missed.”

The Duke of Sussex was rumoured to be travelling to the UK in July already, though his travel arrangements had not been confirmed. He and Prince William are due to unveil a statue they commissioned to pay tribute to their mother on what would have been her 60th birthday, per Vanity Fair.

Travelling to the UK will likely pose some logistical challenges for Prince Harry. The UK government guidelines currently call for a required 10-day quarantine. “If you’re travelling to England you must either quarantine in the place you’re staying or in a managed quarantine hotel for 10 days because of coronavirus,” states the government website. “What you need to do depends on where you travel in the 10 days before you arrive in England. You must also get two coronavirus tests after you arrive in England. You’ll need to book these before you travel.”

This post will be updated as and when more information is available.