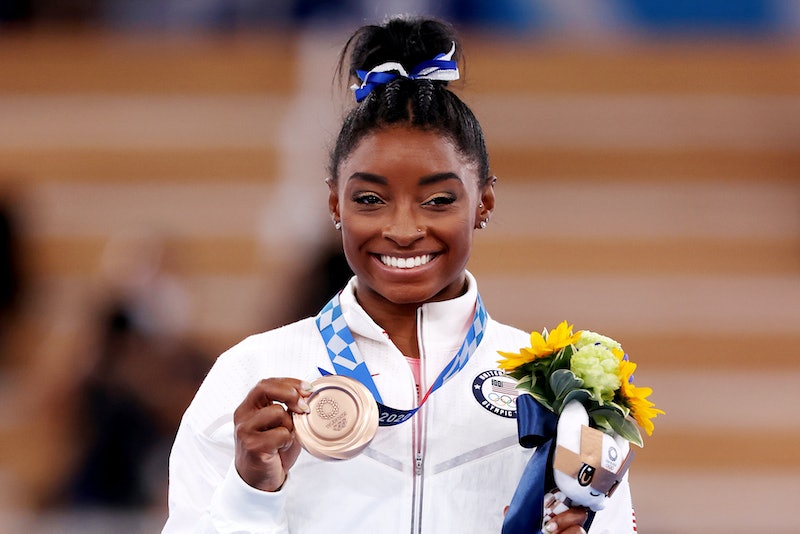 Simone Biles is reportedly “leaving the door open” for an Olympic return. On Wednesday, Aug. 4, the 24-year-old gymnast sat down with Hoda Kotb to discuss her unique experience at the Tokyo Games after withdrawing from several competitions for her mental health. Biles backed out of the team all-around, the individual all-around, the vault, floor exercise, and uneven bar events after experiencing “the twisties,” a mental block that disconnects an athlete’s mind and body during a routine. She later won the bronze medal in the women’s balance beam competition, and although she’s not ruling out competing in 2024, she told Kotb that she’s still trying to “relish and take this Olympics in.”

“It’s so crazy,” Biles told the Today host of her bronze medal win. “I’m happy I was able to get back out there and do one more routine, especially since I had the girls there rooting me on as well as the guys. It just felt really amazing.” The seven-time medalist also said that she was “proud” of herself for pushing through despite having to take a step back last week to prioritize her health. “I wasn’t expecting to walk away with a medal or anything, I just wanted to go out there and do it for myself. And I did,” she added.

Biles told Kotb that the pressure was “a little bit too heavy to carry” ahead of her arrival in Tokyo. After earning four gold medals and one bronze medal at the 2016 Olympics in Rio, she was expected to dominate across several categories. However, after USA Gymnastics issued a statement that said Biles wouldn’t be competing in the team finals for “medical reasons” on July 27, she explained to the press why it was so important for her to withdraw. “Whenever you get in a high stress situation you kind of freak out,” she said last week, according to CNN. “We have to protect our body and our mind. It just sucks when you’re fighting with your own head.”

In addition to feeling general stress about performance, Biles said that she also felt a “responsibility” to make sure that former team doctor Larry Nassar’s abuse wasn’t “buried under the rug.” This year, Biles was the only gymnast on Team USA who had been abused by Nassar. “There are certain triggers (that) you don’t even know and I think it could have [affected me],” she said. “I’m not exactly sure, I was just the craziest week.”

Regardless of what caused the twisties, Biles wasn’t confident that she would bounce back in time to participate in other events. On Aug. 2, however, USA Gymnastics confirmed that Biles and teammate Suni Lee would take part in the balance beam competition. “It definitely feels better than Rio’s bronze medal on beam, but it also shows that I did it for myself, I can go out there and hit another set,” she told Kotb of overcoming her mental block. “I was just excited to compete in the Olympics again because at the beginning I just thought it was over.”

During a July 31 Q&A on Instagram, Biles told fans that she could not “tell up from down” and that it was the “craziest feeling ever.” She called the experience “petrifying” and told Kotb that she felt she had no choice but to withdraw for the benefit of the team. “They worked so hard and I couldn’t lose a medal for those girls,” she said, explaining that they would’ve lost their chance if she had participated, risked an injury, and got “lost in the air.” “It could have gone a lot of different ways, but people don’t know the rules,” she continued. “They think ‘Well, she just quit,’ and I’m like, ‘No, I don’t think so.’”

Ultimately, the gymnast felt it was “brave” that she put her health first while also considering what was best for the entire team. “If you would have asked me a couple years ago, I would have kept pushing through,” she said. “But I’m at the age now where I kind of control my own mental well-being and I knew that it was the best decision for the team and myself.” Walking away from all of those events after working so hard for so many years wasn’t easy. Still, she feels very “grateful” that the Tokyo games “ended on a high.”

The gymnastics champion took to Instagram on Aug. 4 to reflect on her time in Tokyo. “Not at all how I imagined or dreamed my second Olympics would go but blessed to represent the USA,” she wrote alongside a photo of the Olympic rings. “I’ll forever cherish this unique Olympic experience.” Biles also wrote that she was proud of the additional medals she picked up, including the silver medal the USA won in the team final. “Leaving Tokyo with 2 more Olympic medals to add to my collection isn’t too shabby!” she added.

Elsewhere in her Today interview, Biles told Kotb that she’s walking away from the Olympics with a lesson that’s more valuable than any medal. “One morning I woke up and I was like, ‘I’m more than my medals and gymnastics, I’m a human being,’” she said, adding that she’s “not a quitter.” “If this situation didn’t happen I don’t think I would have ever seen it that way, I would have never been able to walk away and think I’m more than just gymnastics and medals.”