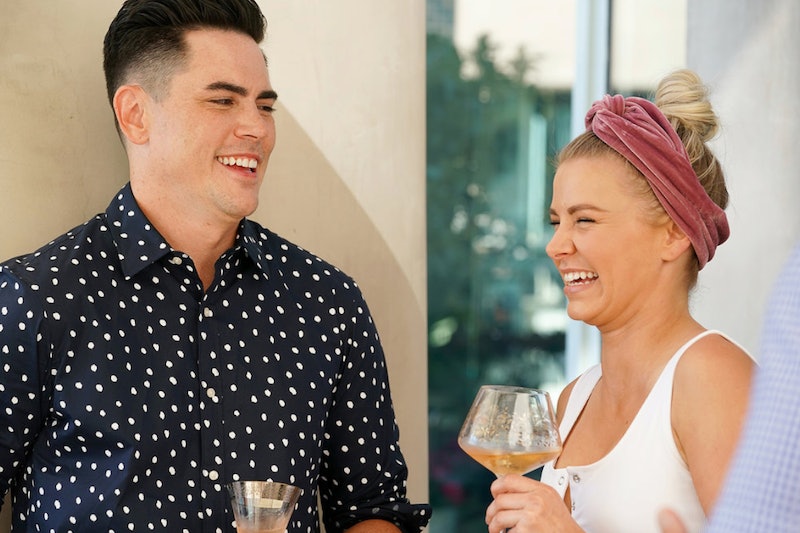 SUR partially reopened in February 2021, but filming for Vanderpump Rules Season 9 is back in full swing this May. Variety confirmed the thrilling news in April, adding that cast members Katie Maloney-Schwartz, Tom Schwartz, Tom Sandoval, Ariana Madix, Scheana Shay, Lala Kent, James Kennedy, Raquel Leviss, and the show’s grand dame Lisa Vanderpump are all coming back. The entertainment news publication added that new staff members for Vanderpump restaurants would also be announced in the future.

Shay confirmed in a July 2020 tweet she was not quitting the show and planned to return to SUR “once work opens/picks back up.” On the other end of the spectrum, Jax Taylor and Brittany Cartwright announced in December that they would not be returning to Vanderpump Rules. Shortly thereafter, Bravo confirmed the news to Variety but offered no further explanation. Fans had long been calling for Taylor's firing after he falsely accused co-star Faith Stowers, a Black woman, of criminal activity. Lance Bass — a friend of Taylor and Vanderpump — revealed on the June 15 episode of his Daily Popcast that he did "not see Bravo keeping [Taylor].”

All of this controversy followed longtime Vanderpump stars Stassi Schroeder and Kristen Doute’s firings one week after Stowers revealed they once reported her to the police for a crime she did not commit. Stowers told Page Six she felt "so vindicated [that] studios and production are able to see blatant racism and make these positive changes and help move the race forward, adding on an episode of Us Weekly's Watch With Us podcast that she would "love to go back" to the show now that Schroeder and Doute have been terminated. "I don’t have a problem with Vanderpump Rules. I don’t have a problem with Bravo in general," she said.

Prior to Schroeder and Doute’s ousting, the network, along with the show's production company Evolution Media, confirmed in a statement that they also fired Season 8 newcomers Max Boyens and Brett Caprioni, whose racist tweets resurfaced earlier this year. All of the cast members have issued apologies for their racist actions.

Boyens is currently embroiled in another controversial matter, as his rep tells Us Weekly that he resigned from Schwartz and Sandoval’s TomTom restaurant bar. It’s been alleged that Boyens quit his TomTom job due to “issues related to health insurance.” As of late March, news that the eatery would reopen was confirmed by Vanderpump employee Richardson Cherry. Since then, an official date has not yet been verified.

In March, stars Tom Sandoval and Ariana Madix gave fans hope for the future of Vanderpump Rules in light of production obstacles due to the global health pandemic. “Obviously, they want to do another season, and they have every plan and intention of doing that, but it’s just because of the industry that we’re in, they don’t want to see us just like sitting in our houses,” Sandoval told Page Six, adding that there are still “a lot of restrictions when it comes to productions” in Los Angeles. In regards to TomTom, Madix said they’re “kind of just waiting and seeing” what happens, and she “wants everyone to be safe” if and when filming should begin.

Vanderpump Rules is typically filmed the summer before it airs, but Bravo usually waits until November to confirm the new season's cast and premiere date. With filming for Season 9 underway, fans should expect to hear more exciting updates about the show’s airdate and more in the coming months.

More like this
'The Bachelor' 2023 Schedule Differs From Last Season In 1 Key Way
By Grace Wehniainen
Everything To Know About 'RHONJ' Season 13
By Brad Witter and Jake Viswanath
This ‘Bachelor’ Spoiler Teases The Dramatic Self-Elimination Of A Fan Favorite
By Grace Wehniainen
Andy Cohen Apologized To Larsa Pippen After A 'RHOM' Season 5 Reunion Dust-Up
By Brad Witter
Get Even More From Bustle — Sign Up For The Newsletter
From hair trends to relationship advice, our daily newsletter has everything you need to sound like a person who’s on TikTok, even if you aren’t.