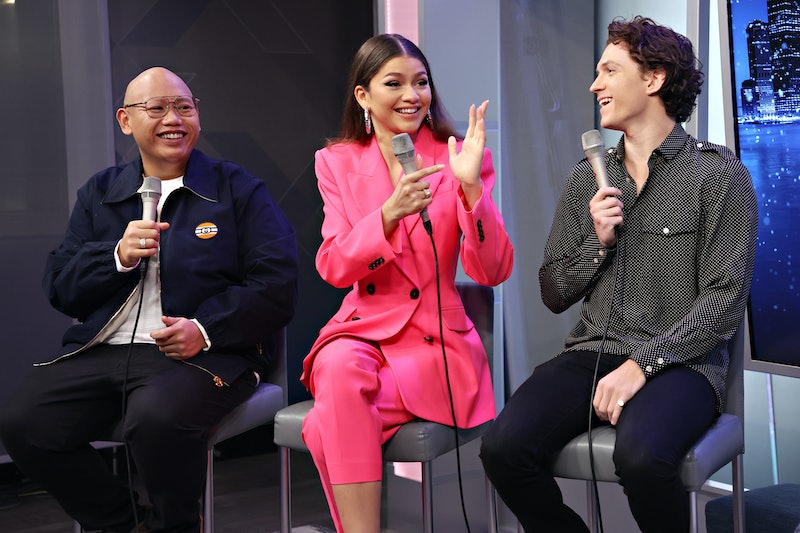 Spider-Man: No Way Home may not mark the last of Tom Holland’s web-slinging days — producer Amy Pascal confirmed that “the next three” entries in the Marvel/Spidey Cinematic Universe are in the works — but it is the end of a certain era. Kind of like high school itself, the last four years have seen Holland, Zendaya, and Jacob Batalon’s friendship grow and evolve IRL. They’ve given us hilarious, spoiler-y interviews, a super sweet relationship, and the most iconic Lip Sync Battle — nay, performance — in history.

As the trio prepares to graduate, so to speak, they’re reflecting on the early days of their friendship — which, apparently, included parties, pool days, and an ill-fated field trip that led to one of their big bonding moments. “[Director] Jon [Watts] sent us to the aquarium, and then halfway through our trip we were all like, ‘We don’t like the aquarium. This is mean.’ And we left,” Holland recounted during a Dec. 10 appearance on Sirius XM.

“We saw these really beautiful whales that were, like, stuck in a building,” Batalon said, a concern that Zendaya echoed. As she explained, “They had us living across the street from the aquarium, and I just remember looking out my window and being like, ‘It’s hot’ — it’s Atlanta, it’s hot, it’s the summertime — and I was just like, ‘There’s a whale in there. Like, several whales.’”

Out of concern for the marine mammals, they ditched the aquarium — and opted instead for a picnic in the park, wondering about what “adult” ingredients (aka “cheese, crackers, and olives”) to buy but actually wanting things like chips and Lunchables.

The outing also came up in an interview with Fandango, released Dec. 10 (apparently it was a really good picnic!), in addition to other friendship milestones. “I like how we used to say to each other, like, ‘Come over on the weekend and we can all play in my pool,’” Holland said.

Holland also mentioned a No Way Home wrap party as a favorite memory of his, referencing a “great video” of him and Batalon “dancing in a sexual [way].”

After Spider-Man: No Way Home premieres Dec. 17 (or 16, for spoiler-averse Thursday-nighters), viewers will finally know how Holland’s Homecoming saga ends — and whether MJ or Ned will come along for future web-slinging adventures. Of course, on screen or off, it looks like this trio will be bonded for life.