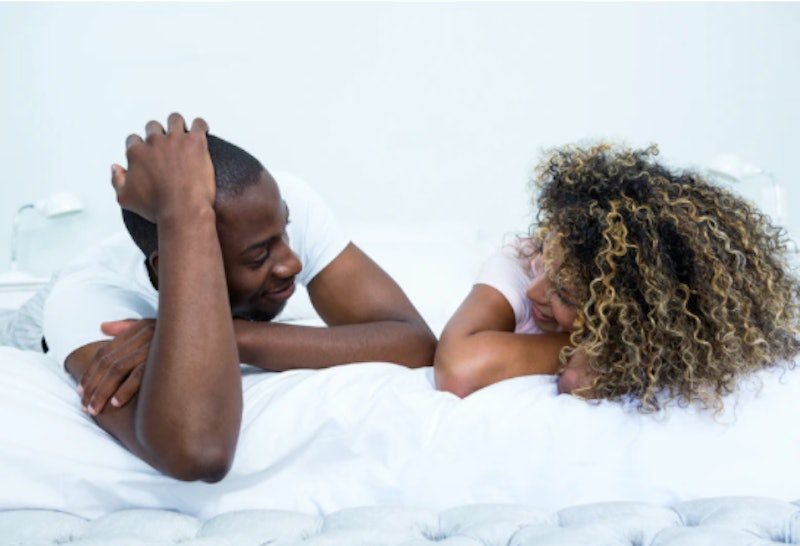 Why is it so much easier to have sex than it is to talk about sex? Particularly in romantic relationships, the topic tends to feel awkward, uncomfortable, and sometimes even unnecessary. But the reality is you'll want to figure out a few ways to broach the subject, especially if your goal is to create a stronger connection.

So, how do you talk to your partner about sex? And why does it feel so strange? "Talking about sex and sexual desire with partners is difficult for a lot of reasons," Dr. Justin Lehmiller, a social psychologist and research fellow at The Kinsey Institute, tells Bustle. "It’s partly because many people feel ashamed of their fantasies — they think there’s something 'weird' or 'abnormal' about them (even though most of us are actually fantasizing about the same things!)."

We're raised to think sex is taboo or embarrassing, which contributes to the awkwardness of it all. Couples may put off these conversations time and again because bringing these topics to light can mean rocking the boat or digging up some potentially embarrassing or unpleasant feelings. "Plus, most of us never really learned any sexual communication skills," Lehmiller says. "Unfortunately, many sex education programs focus on teaching people to 'just say no' to sex instead of teaching them how to have productive and healthy sexual conversations."

Thankfully, it's possible to unlearn this habit and eventually get to the point where you and your partner can talk about sex, discuss problems, and even become more open about trying new things in the bedroom. In fact, communication is the secret to good sex, so start by getting yourself in the mood, and then give a few of these conversation starters a try.

1. Start Off By Sexting

One big advantage that sexting has over face-to-face interaction is the freedom it gives you to test the waters, share intimate thoughts, and start a deeper conversation about sex — without the pressure of broaching the subject in person.

Saying something simple like, "You know what I've always wanted to do..." can kick off a sexy back and forth. The same goes for pointing out something your partner does that now counts as one of your new favorite turn-ons. Admit that you can't stop thinking about it, and go from there.

Sending a steamy message in the middle of the day is way less intimidating, and can help break the ice. Not to mention, it totally counts as foreplay. "Sexting helps cultivate anticipation, which can intensify the physical pleasure once together," Dr. Jess O'Reilly, a resident sexologist at Astroglide, tells Bustle. "And in some cases, it counts as sex itself."

2. Point Out Sexy Moments In Movies

A movie can make for a great opportunity to start a conversation. "For example, if you see a scene on Netflix that turns you on, speak up," O'Reilly says. If a character is doing something you'd like to try, pointing it out is a natural way to begin talking about fantasies, new sex positions, or whatever else has been on your mind. (Who knows, you might even want to start trying it right then and there.)

Alternately, if you're watching a scene that makes you uncomfortable, "ask them how it makes them feel," O'Reilly says, and be honest about why it's turning you off. Is there something about ethics or morals? Or does it bring up bad memories? Letting your partner know is important so that they can be more aware of what you don't like, and support you in avoiding that going forward.

It'll also be a great time to talk about consent. Even if you've been together forever, "you'll need to keep the conversation going," O'Reilly says, "as needs, interests, and boundaries vary from day to day."

3. Pick A Good Time To Talk

Of course, you can always take a deep breath and say, in a straightforward way, that you have a few things on your mind that you'd like to share. Because "sometimes it’s easier to just put it out there," Jared M. Grant, PsyD, a licensed clinical therapist, tells Bustle. Afterward, gather your thoughts so you can go into the conversation with a few specific questions, concerns, etc.

You might even want to schedule a time to talk, Grant says, so that it feels less sudden. You won't, for instance, want to bring up the topic when you're cranky, or tired, or late for work. Instead, choose a time when you can both settle into the couch, get comfy, and chat.

Start by letting your partner know why you haven’t shared these things with them, Grant says, and make it clear it isn't going to be a negative conversation. Instead, admit that talking about sex has felt a bit off-limits or taboo. Chances are they've felt the same way, Grant says, and will appreciate the fact you're creating a safe space to be vulnerable.

The next time something sexy happens, and you're all about it, make sure to let your partner know. As Grant says, sharing what you like will encourage more of the same. "People like to be good at things," he says. "Tell them when they are and watch it happen more often."

For instance, you might say during sex that you really like to be touched a certain way, or that you find it hot when your partner does XYZ. But there will likely be moments throughout the day, like when you kiss in the morning, or when they hug you from behind as you make coffee, that can serve as a stepping stone, too.

Use these moments to say, "You know what? I think it's so hot when you do that." It's yet another ice breaker that'll make it easier to have a conversation about your sex life, especially since you'll be starting off with a compliment.

5. Ask Each Other Fun Questions

Another way to start talking about sex? Asking each other fun, quirky, or interesting questions. Dr. Justin Lehmiller, a social psychologist and research fellow at The Kinsey Institute, tells Bustle this will not only help you into the topic, but it will help normalize conversations about sex, and make it easier to talk about bigger wants, turn-ons, or problems areas in the bedroom.

"For example, find some non-threatening conversation starters, such as 'Where did you think babies came from when you were growing up? And when did you finally learn the truth?' You don’t have to use this exact question but think about questions like this where everyone will have a story and it gets the ball rolling," he says.

From there, once you do start talking about things like fantasies, be sure you validate each other. "It’s easy for people to feel insecure when a partner suggests trying something new because, to some, it implies that there’s a problem," Lehmiller says. Start by telling your partner what you currently love about your sex life, "then present an idea and talk about how it’s something you can both enjoy." That way you can be honest about what you'd like to try, without making each other feel inadequate or insecure.

You won't want to start this conversation with the dreaded "we need to talk," Jaime Bronstein, LCSW, a psychotherapist and licensed clinical social worker, tells Bustle. Because that will only make your partner's blood run cold, and put them on edge.

Instead, "have fun with the conversation," she says. "Sex should be fun, so the conversation about sex should be fun." Start with a line like, “So, I have an exciting idea and I hope you’re on board" or make a joke about fantasy and then say, "But really, we should give that a try." Smile, laugh, make it flirty, and it'll feel way less intense.

Keeping it light will combat awkwardness, Bronstein says, while also contributing to a peaceful conversation, and more open-mindedness.

Once you've eased past the first few potentially awkward conversations, make a point of discussing sex more often, so that it becomes second nature. Share your fantasies during late-night pillow talks, discuss sex the next morning, keep those sexts going — and you should both begin to feel more comfortable.

"Ultimately, don’t be afraid to vocalize your wants, needs, and desires," Mia Sabat, a sex therapist with Emjoy, tells Bustle. "This is the foundation of all positive intimate experiences. Focus on communicating and leave your inhibitions at the door."

This article was originally published on Sep. 14, 2015